It is not the critic who counts; not the man who points out how the strong man stumbles, or where the doer of deeds could have done them better. The credit belongs to the man who is actually in the arena, whose face is marred by dust and sweat and blood; who strives valiantly; . . . who at best knows in the end, the triumph of high achievement … Theodore Roosevelt 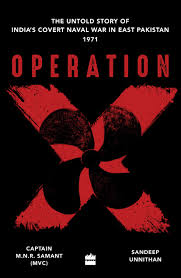 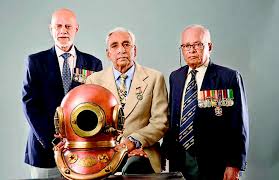 Eastern Naval Command (established 01 Mar 1968), if blessed with a vocal-chord, would  proudly  recount her life’s glimpses, ‘Still an infant under 4, I was called upon by Mother India to vanquish the enemy submarine ‘Ghazi’ and assist in the creation of a new Nation with the deployment of Vikrant’s Sea-Hawks amidst absolute blockade of East Pakistan by ships of my fleet. I was thus  instrumental in scripting the surrender of 94K Pakistani soldiers on 16th Dec 1971. The 71 War, post the WWII was the first major war, where the well-planned synergy of all the three forces came to the fore to script not only a Win for India but helped in the creation of a new Nation, ‘B-a-n-g-l-a-D-e-s-h’.

While overtly all plans were afoot to vanquish the enemy in East Pakistan by Indian Army, Air Force and Navy, an “Operation (code name) –X”, was being conceived and operationalized in the Naval War Room of NHQ. This operation, that turned the tide in India’s favour was kept in wraps and not revealed even after the War. The executor of the Operation Late Capt MNR Samant (MVC) and Sandeep Unnithan, Executive Editor of ‘India Today’ and the dynamic Son of our esteemed NFMC member Cdr GVK Unnithan (00778-T)(NFMC L-160), have explicitly brought out the marvellous covert operation in great details in their elaborate Novel ‘Operation-X’. It was very unfortunate the Chief Architect of this Operation breathed his last on 20 Mar 2019 due to cardiac arrest in Arogya Nidhi Hospital Vile Parle, a few months prior to the release of the Book at the Nehru Memorial Library, Delhi.

At the high-profile launch of Operation X, published by HarperCollins, the top brass of the navy both present and erstwhile converged at the Nehru Memorial Library on Friday 09 Aug. According to former Chief of Naval Staff, Admiral Sunil Lanba, “The 1971 operation was the Navy’s finest hour. It operated as a multidimensional force. And the high point was what Samant and his band of brothers achieved behind enemy lines," According to G Parthasarathy, former High Commissioner to Pakistan, “The book fills a crucial gap: of giving the unsung heroes of the 1971 Bangladesh War credit where it is due. What was most impressive about the war was the synergy between the political leadership, the military and the people of India." 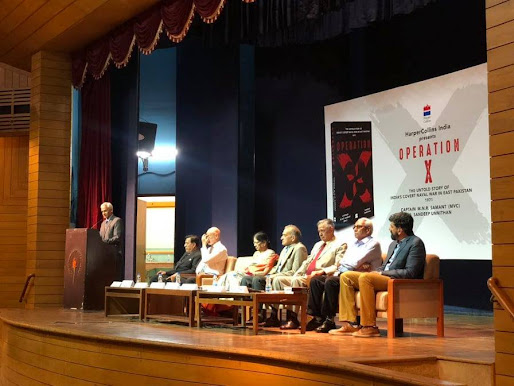 THE BOOK LAUNCH IN NEW DELHI

Operation X  is the untold story behind one of India’s largest covert war, written by one of its principal architects. Naval Commando Operation-X, was a Directorate of Naval Intelligence code name for series of guerilla operations directed against the maritime jugular of the Pakistan Army in erstwhile East Pakistan. These innovative sabotage missions using specially trained Bengali college students were part of a larger covert operation run by the Indian government in the months preceding the 1971 Indo-Pakistan war. NCO(X) is one of the largest use of maritime saboteurs in the history of naval warfare.

The book is an exciting and thrilling account and a lesson for the students of Military History, that’s life-like due to its well researched speedy script. It’s a pure pleasure to absorb the essence of the war that ended sooner than predicted. The awesome novel is unputdownable the credit for which goes to Captain Samant and his co-Author Mr Sandeep Unnithan.

Early 1971 onwards Pak Military in East Pakistan perpetrated genocide on innocent Bengalis of the country, compelling lakhs to leave their homes and take refuge in India. The young ones were willing to be eager to be trained in the intricacies of Guerrilla warfare. ‘Operation X’ was the code name for ‘jackpot-underwater guerrilla operation’.  The CNS Adm Nanda and Capt Mihir Roy(later VAdm and FOCinC East), Director of Naval Intelligence swiftly orchestrated training of several freedom fighters to turn them into naval commandoes. The site selected for this was a location at Plassey (the location of the famous battle of Plassey between Sirajjudaulla and the British) on the Banks of Bhagirathi. The Bengali Submariners from a Pakistani Submarine docked at Toulouse, France were shocked on hearing radio news of the atrocities of Pak Army on innocent Bengalis and seven of them, with the help of Indian diplomats flew to Delhi and were inducted to join the Mukti Bahini being trained as naval commandoes. Adm Mihir Roy and Capt Samant enrolled them as team leaders for the Operation. (The training team included Cdr VK Kapil and L/S Chiman Singh. It was a great honour and privilege to meet both veterans during the Book Launch)

Post the intensive and strenuous training the first salvo was launched by the commandoes on 14-15 Aug’71(to coincide with Pak’s Independence day) and resulted in huge losses to PN by blowing up of their Ships, support vessels and Port infrastructure, vital to their Navy. The over 400 Bengali naval commandoes devastated over a lakh tonne of vessels in and around the harbours of Chittagong, Chhalna, Mongla, Narayanganj and Chandpur between Aug and Dec’71. The debris ensured shipping disruption and sustained sabotages by marine commandoes kept mercantile marine away. This caused a severe dent to the enemy’s  Naval ops that came to a standstill.

The war appeared to be long-drawn, but ‘Operation X’ changed everything. It became the turning point in the War for Liberation,  resulting in the birth of the Bangladesh Navy, with Captain Samant ceremoniously being honoured as its first chief by Bangladesh’s first army chief and defence minister, General M.A.G. Osmani.

The Indian Navy had come of age and had made its presence felt in the outcome of the tri-services War. The integrated battle planning and warfighting was evident in 1971 and the importance of the navy’s role in disrupting sea lanes were brought home to decision-makers.

This book by Capt Samant and Unnithan brings to the fore admirably the true facts right from the conception stage. The existence of this ultra-covert operation is yet to be publicly acknowledged by the Indian Navy. These are revealed for the first time in Operation-X. The experience gained from this operation resulted in the Navy setting up a dedicated Indian Marine Commando Force popularly called the MARCOS.

The Mukti Bahini had indeed shown a way ahead to  the Baloch, Mohajir, Sindhi and Pakhtun people of Pakistan, who have all asserted their independence time and again since the inception of Bangladesh. 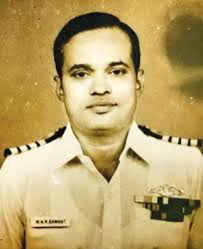 Captain Mohan Narayan Rao Samant (Indian Navy, retired) was born on 19 Oct 1930, commissioned into the Indian Navy in 1952 and belongs to the submarine branch. He commissioned India’s third submarine INS Karanj in 1969. During the 1971 war, he was Officer-in-charge of a covert naval unit under the Directorate of Naval Intelligence based in Calcutta from where he directed a four-month-long campaign of guerilla warfare against the Pakistan army’s war effort in Bangladesh. He led a squadron of gunboats for a raid into East Pakistan during the 1971 India-Pakistan War after the outbreak of war for which he was awarded the Maha Vir Chakra, India’s second-highest wartime gallantry award.

After the successful Book launch of ‘Operation X’ in Delhi on 9 Aug at the Nehru Memorial Library Delhi, Sandeep Unnithan decided on a second Launch of the book in Mumbai at the Indian Merchants Chambers building near Churchgate at 1830 hrs on 12th Oct for the dignitaries of the city. Adm Vijai Shekhawat, PVSM, AVSM, VrC (00189-B)(Retd) & Mrs Binu Shekhawat graced the occasion as the Chief Guest. Other dignitaries  who graced the occasion were former CNS Adm and Mrs L Ramdas, VAdm & Mrs IC Rao, RAdm & Mrs D Thukral, Cmde and Mrs Mike Bhada and other Senior Veterans. Among the HQs staff  VAdm RB Pandit, COS WNC and Cmde Kesnur, OIC MWC, graced the occasion. Cdr Vijay Vadhera, President NFMC had promulgated the event and extended the invite to all Veterans. It was great to meet and greet our noble Veterans. We were also blessed to meet and interact with the Veer Nari Mrs Nirmala Samant (wife of Late Capt MNR Samant), Mr Sandeep Unnithan the Co-Author, Cdr VK Kapil, VrC, NM(G) (the ExO of the Operation), Cdr VK Raizada, NM(G)(the Marine Engineer who steered the course of the Operation), Petty Officer Chiman Singh, the Valiant member of the Operation X training team and a recipient of the coveted MVC for his bravery during the War.

Cmde Kesnur and Mr Sandeep Unnithan addressed the gathering and played the Video of the Covert operation carried out by the Valiant Naval heroes during the War. Cdr Vijay Kapil, Cdr VK Raizada, PO Chiman Singh spoke about their experiences during their daring operation-X.  Cdr Vijai Kapil had come and stayed with his coursemate Lt Shrikant Bhende, the architect of the Amar Jawan monument at Borivali 3 yrs ago. It was a marvellous evening of meeting and greeting the Valiant heroes of the 1971 War. 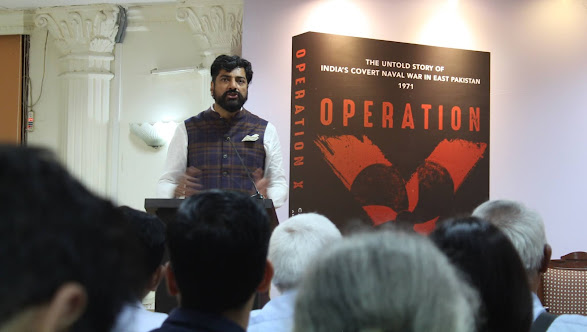 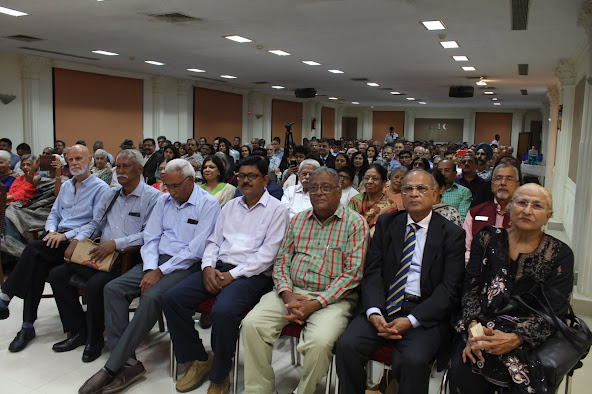 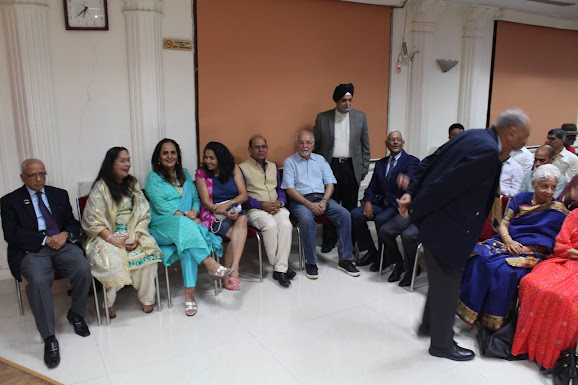 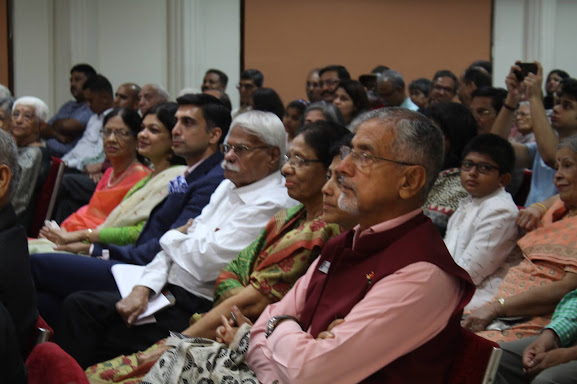 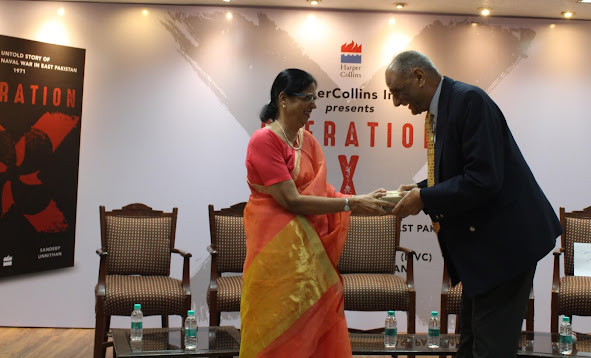 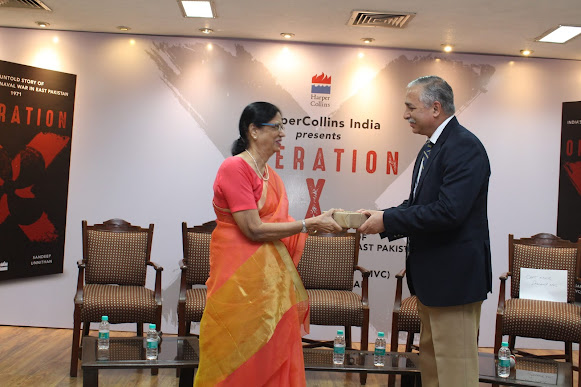 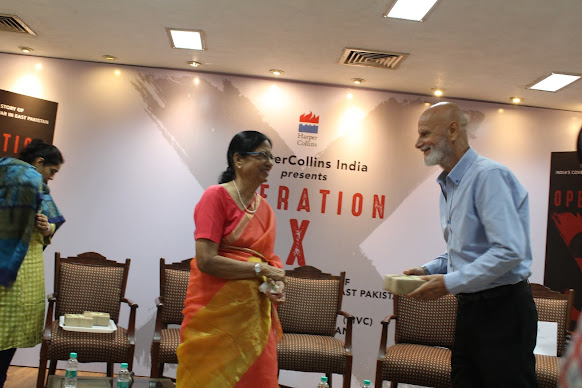 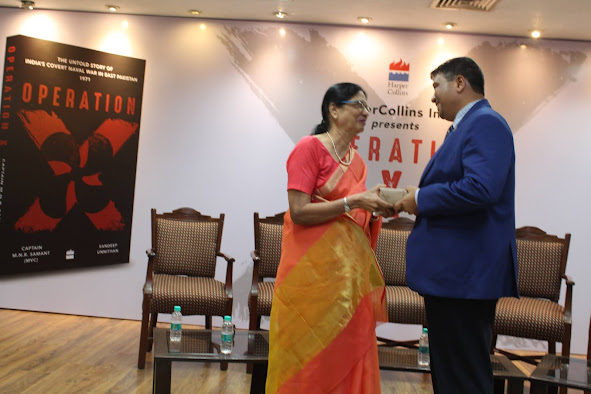 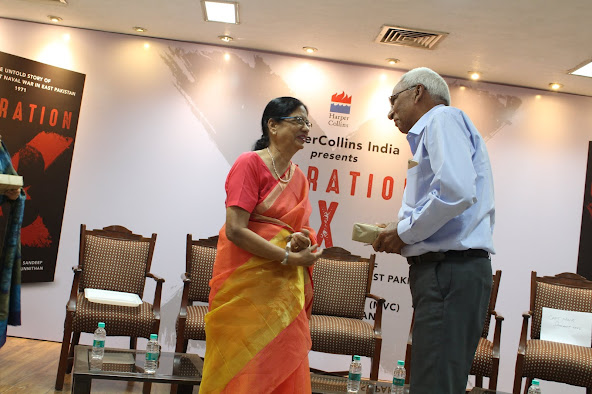 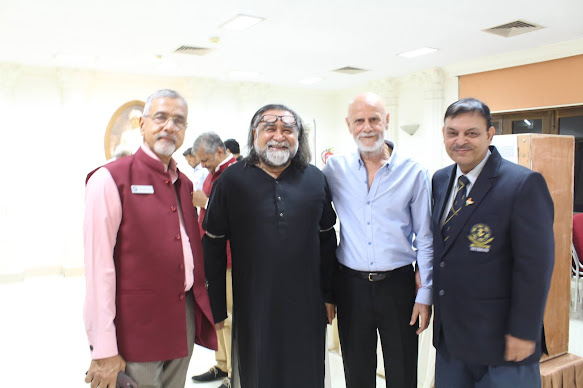 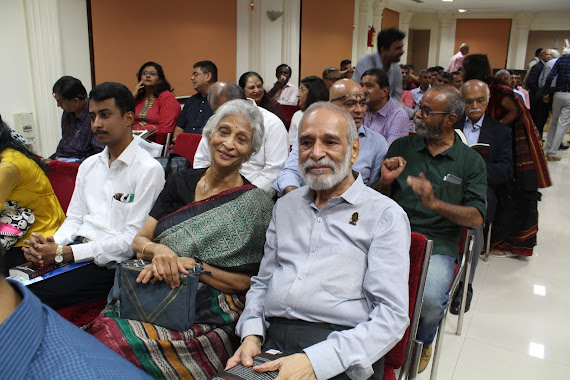 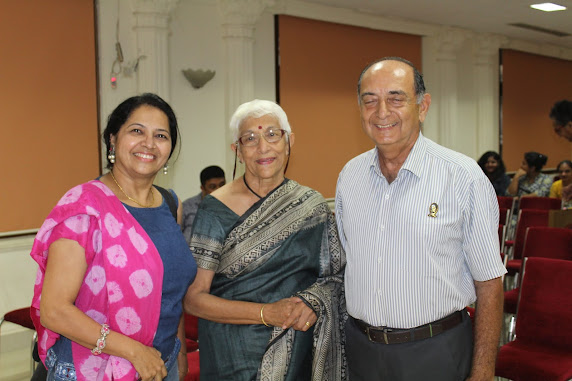 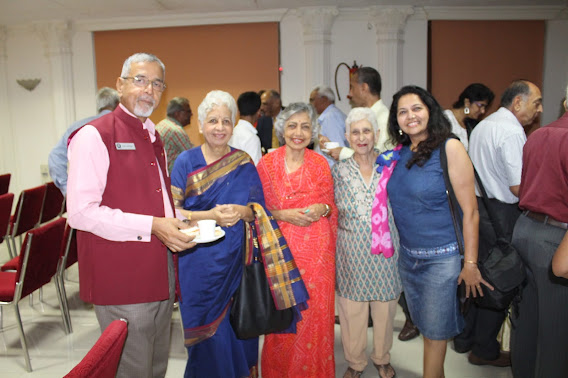 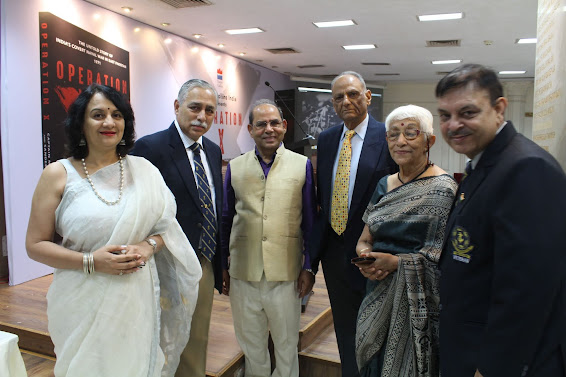 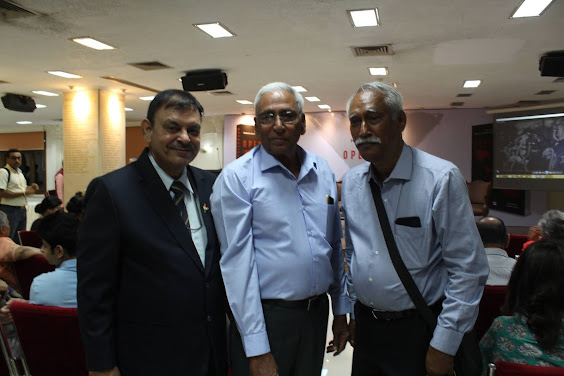 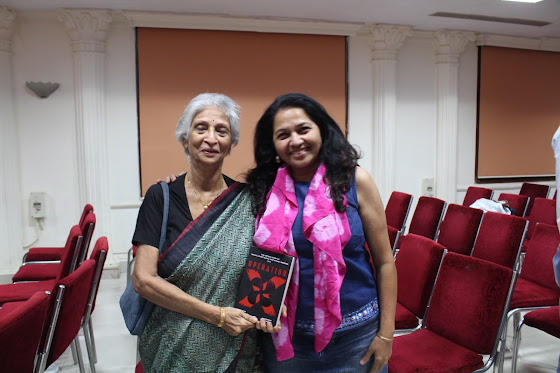