NAVY DAY
=========
Friends today is 04 Dec, Navy Day....The Day our Fine Indian navy inflicted heavy casualities on Pakistan that started the 1971 war on the previous day....It was the Day, 3 Vidyut class Missile boats escorted by 2 Arnala class Corvettes dared to enter Pak territory to fire Styx SSMs (first time in the Region) to create havok for the Enemy on the midnight of 04/ 05 Dec....It was the Day when Sareshth Kumar Sir was scanning the hotels and streets of Bombay for security counter measures....the Day Mohan Ram Sir was working on a better Missile Ship for our fine Navy, trying out Gausian formulae....

We all are so proud of our veteran brothers who were serving on the ships and made this possible....Its my pleasure to share with you all an interview with Redfm on this Day...On the morning of 04 Dec 2014, when I was on Marine drive, I got a call from Redfm, Mumbai for an interview. I pulled my car to the side and spoke to RJ Malishka on the relevance of Navy Day of our fine Navy.... Here's how it went...Regards...

My Dad left for his heavenly abode at the midnight hour of the Golden jubilee of our independence day,(1997) when I was posted in the Naval Unit NCC Baroda....My brother rang me up just past midnight from our Jamnagar Home...
An hour later I with Meena and two small kids were on road in our Maruti Van...Non stop we drove...till then I was in a tearless terrible shock...in the morning we stopped at a tea-stall...while I just had my first sip, this song with a lot of meaning , welled up my emotions and lifted the shutters of my tear dams...Altaf Raja had just appeared on the musical scene with his record...
Two years ago I personally met him at a concert organized by the Army in AOI, Mumbai and conveyed the episode and my felicitations....He is a down to earth person without airs about his fame…. It was a pleasure to meet him. 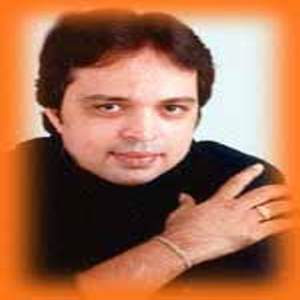 LOOKING THROUGH THE PRISM OF LIFE 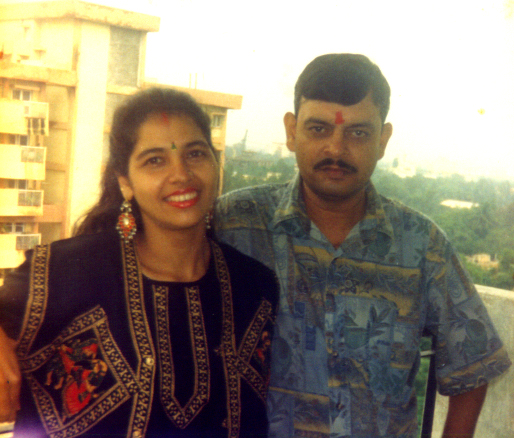 In Oct ’83  as a young flunky Lieutenant in the mighty Super- Connie squadron in Goa, I was exuberant on being transferred to Coast Guard 700 sqn Calcutta on deputation to operate the Fokkers on lease from IAC…Exuberant, as I’d meet some officer- colleagues who had been with me in Cochin and Goa……My instructor of Connie, (Late) Cdr Gautam Mukherjee was now the Senior Pilot of Fokkers… 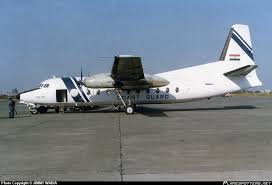 Most pilots are sometimes faced with an emergent situation wherein the responses need to be prompt, correct and precise. I, then Lt R Dutta and my crew, Lt Shubhranshu (copilot) and LtCdr NI Arif(O), who had just joined the sqdn, faced one such situation on the fateful day of 09 Dec 87, during a CTF (Check Test Flight) on our twin-prop Islander, IN-132 at INS Garuda, .


The ATC and Met briefing at 0730 hrs on the day was standard as the sky was CAVOK (Clouds and Visibility OK).  We took-off at 0810 hrs after a quick bite, turned downwind climbing to 3000 ft.  I requested for sector South, which was promptly cleared as a civil flight was inbound. After having levelled off at 3000 ft, the feathering and unfeathering of the port engine was executed as per the CTF schedule.  This involves switching off the port engine and checking the climb performance of the starboard engine.  Having checked the single-engine climb performance of stbd engine, a slow climbing turn to port was executed towards the airfield.  The port engine was relit and power was checked at various throttle settings.  All parameters normal, warning lights off, the starboard engine was feathered (switched off) for a single-engine climb performance check on the port engine. As the port throttle was being opened, sudden but slight yaw was felt to the left with the engine noise dying down.  Lo! The port engine had FAILED.  The stbd engine was in feathered (switched off) condition.  No panic yet.  I handed over the flying controls to my copilot, aircraft trimmed for 65 kts, heading towards the runway 35 threshold and attempted to relight the stbd engine.  All checks were carried out in the correct sequence and the starter button pressed.  The stbd propeller cranked intermittently but did not pick up.  I piped up with the Mayday call, with intentions of a dead stick landing.  All unfeathering checks were repeated and the next attempt also lead to a similar result.  The altimeter was slowly winding down passing through 2500 ft.  An attempt was made to restart port engine, but no joy.  Again an attempt was made to unfeather the stbd engine which cranked intermittently.  The aircraft was gliding down through 1500 ft and it was appreciated that the aircraft was slightly below the glide path with the approach thick with Palm trees, a factory ahead (our 500 ft landmark for correct approach with both engines), followed by the Mattencheri channel, the railway line, the Wellington road and then the threshold of Runway 35.  Ditching appeared to be inevitable.  I asked my copilot to turn right towards the backwaters, as I once again attempted a relight of engines but in vain. Copilot piped up “ Approaching 500 ft, Sir”.  Trying to maintain my cool I took over the  flying controls and piped up on RT, “Mayday, Mayday, Mayday…IN 132 both engines failed, ditching 2nm South-East”.  ATC acknowledged, “Roger, 132 your homing 348”.


Aircraft fated for ditching, gliding straight along the channel south of the sailing club, the crew prepared for the SOP rehearsed live emergency and escape drills.  As the altimeter was winding down it appeared as if time compression was taking place.  Slowly the aircraft was rounded off into the landing attitude, missing the fishing stakes by a few feet.  Speed washing off, controls held firmly, “Prepare for escape, touching down now”.  The aircraft sliced through the water and the nose plunged down steep, as the tail hit the water, despite full backward pressure on the control column. Due to the sudden instantaneous deceleration, the cabin map reading light got dislodged from its holder and hit the windscreen and broke it.  The cold water started gushing in the dark cabin.  I held my breath as I attempted to unbuckle my seat belt which was getting stuck.  Both my crew had safely escaped out through their emergency windows. I struggled and slackened the seat belt, but couldn't unbuckle it… even as the water was soon filling up the cockpit. My endurance was almost at the threshold with a total Red Out.  ’craving for one breath, struggling for one molecule of Oxygen…. “Is it THE END?”...….I had entered the ‘twilight zone’ connecting the ‘Tunnel of Death’….


To return from the ‘Tunnel of Death’, the survivor requires a ‘Hand of God’….An unknown Force had swung my left elbow hard onto the Left wind-shield. And surprisingly the glass window got dislodged. (Hand of God)… Incidentally, the left window isn’t incorporated with the emergency exit, which is only on the copilot’s window.   Still holding my breath, keeping the Tunnel of Death at bay, I struggled to further loosen my belt.…, when I managed to unbuckle my seat belt and made my way out through the window.


Took a deep ‘breath of LIFE’ on surfacing, as I thanked the almighty and my stars.  The aircraft was totally submerged with the fin sticking out.  Shubhranshu and Arif, who were sitting on the cabin top, were delighted and heaved a sigh of relief on seeing me. They said I was in the Cockpit for 2 to 3 mins, and Shubhranshu was contemplating to go in fetch me out... Still, in a bit of shock, we shook hands as we tried hard to smile. A lot of fishing boats had enveloped us to give us a helping hand. We could see two ferries approaching the aircraft.  There was no sign of SAR Helo yet. The aircraft started sinking nose down, as the water had filled up in the fuselage.  We swam towards one of the ferry-boats and came alongside, south of , the boat crew were very kind and courteous and the locals gathered around us.  Most of them had seen the blue-bird gliding down into the channel.  We must have been a strange sight in our drenched overalls as we walked into a govt school to ring up the Ops room of INS Garuda.  When Arif contacted the station Base Ops, he retorted, “Eh Arif, please don’t disturb me, I am tackling a live emergency”, and hung up.  Contact was made again and Base Ops was informed that we indeed were the survivors of the ill-fated aircraft and conveyed our position. The Ops room must have heaved a sigh of relief since the two SAR helos launched at the Mayday call had not sighted the ditched Islander yet.  And there was no way that they could have. The ATC had obtained the aircraft’s homing as 348, and without converting into bearing had launched the SAR helos on bearing 348 from the airport at 2 NM, which happens to be the area of Cochin harbour mouth, exactly reciprocal to our ditching point. I can visualize the greater panic in the ATC than in the cockpit.

The Ops room on obtaining our position on landline realized the folly of the ATC. As we waited for the Helos our COS RAdm PP Sivamani arrived in the staff car to meet us and check on our well being.  The diverted helos arrived at our site of ditching and we were winched up by Cdr Chandana and Lt Sihota and bought to ATC, INS Garuda.

We were given a warm welcome by Cdr Dhillon,(our Sqdn Cdr) and Cdr G Sharma, Cdr(Air) as the helo dropped us in front of the ATC. We were escorted to the Garuda MI room in an Ambulance. The PMO soon did our post-flight medical and cleared us to go. Meanwhile, our C-in-C,  VAdm L Ramdas (later CNS) arrived in his Flag Car and said, "Thank God you all are alive." The Adm smilingly shook hands with us to pep-up our morale. Cdr Dhillon had got Mrs Shahida Arif picked up, who was eagerly waiting for us at the sqn besides all the staff of 550. The sparkle in her eyes glittered as she invited us to a hot steaming and delicious lunch at Katari Baugh.

The aircraft was recovered within 36 hours from the channel and brought to the south jetty. The BOI, presided over by Cdr SJ Sarma from , grilled the crew for the next one week to ascertain the cause of failure of both engines. Lt IS Deen, the technical member worked beyond the normal call of his duty, putting the engine parts together to come to a logical conclusion. The technical inspection of the engines revealed that the port air-induction hose had collapsed in flight leading to the failure of the port engine and the starter  was getting stuck intermittently leading to non relight of the stbd feathered engine.


This was probably the first successful ditching of Islander of the Squadron, where the crew having survived had tested the ditching characteristics of the aircraft realistically.


A couple of days later, when during the evening hours on stroll to the AED hangar, I patted the cowling of my mother Islander – 132, my eyes did become moist, for She had ferried so many of us for thousands of hours on innumerable occasions, carrying us in her womb, and now lay helpless injured forever. She seemed to convey her melancholy Best wishes as I utter her a Final Good-Bye….. 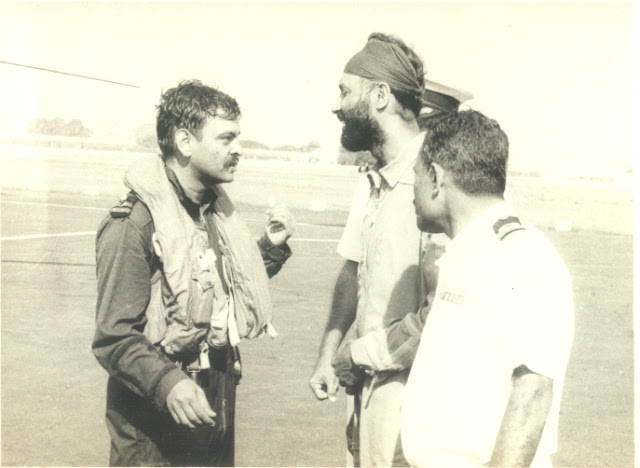 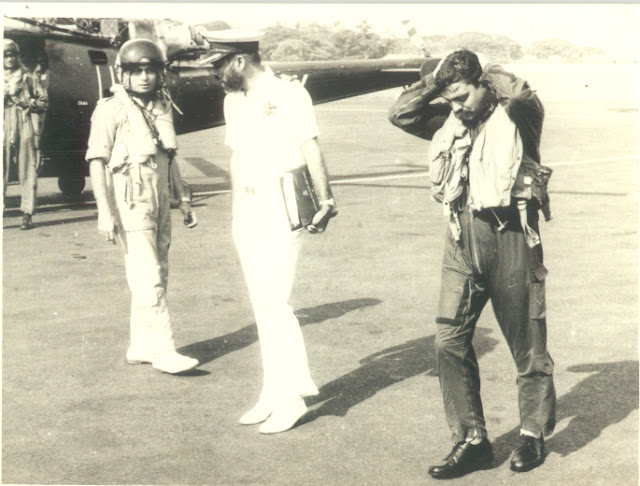 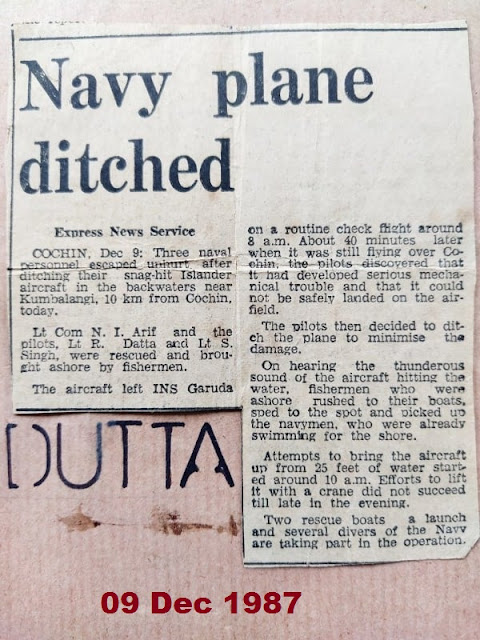 About the Author: Commander Rajinder Dutta (Retd) has been a Naval Pilot and a Qualified Flying Instructor with about 3000 hrs of flying on various fixed wing Aircraft of Indian Navy, viz HT-2, HPT-32, Kirans,Islander, Superconnie, Fokker F-27 and IL-38. He loves to play Golf  and is planning to join Merchant Navy shortly. 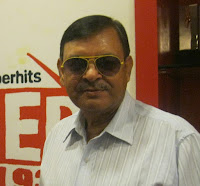