CELEBRATIONS TO HONOUR AN OCTOGENARIAN:


The Veterans of our military service who have put their lives online to protect the freedom we enjoy, deserve to be recognised for their commitment. Revered are the Veterans who are blessed to be an Octogenarian by prayers of their countrymen. 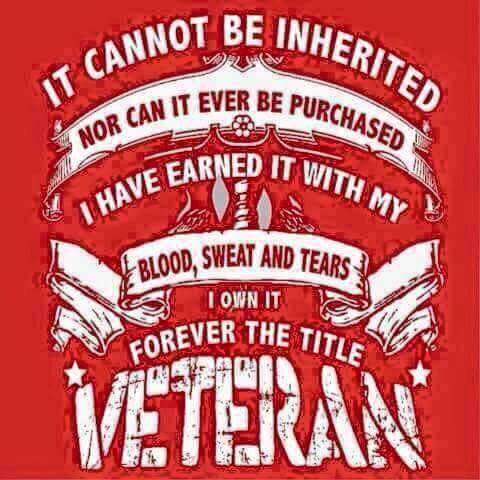 It was certainly an honour bestowed on me by NFMC Secy to present an Octogenarian Memento on behalf of NFMC President to Cdr Teck Sharma ('Teck' - Persian for Brave) on 21st Jun at his Juhu residence. I got in touch with Mrs Sharda Sharma 10 days afore and inquired if we could postpone the momentous occasion by a day to include Mrs Kanta Mukherjee, an NFMC Committee Member, staying close by in Juhu, as she had escorted her Grandson Siddhant Bharti to Goa for the Open Grandmasters Chess Championship and was to return on 22nd. I was pleasantly delighted to learn that 21st Jun was Cdr Teck Sharma’s 80th Birthday and  was planned to be celebrated with the entire extended family. Mrs Sharda had been in constant touch on WhatsApp and we all had been ardently looking forward to the festivities.

On the forenoon of 21st I and my wife drove down from Borivali to Juhu, via road adjoining  Amitabh Bachchan’s  ‘Jalsa’,  to reach 201, Haven-1, where the festivities were programmed. Cdr Sharma post-retirement had bought a Flat at this picturesque location in 1979 and now the extended family had bought  3 more spacious flats in the heavenly Haven-1&2. We were in for amazement as we rang the Bell. Mrs Sharda welcomed us with a pleasant smile and we were charmed by a large gathering of cheerful people greeting us, in an extensive  Drawing cum Dining hall. She introduced us to her Daughter  Deepa Thakore, Son Tarun and their spouses and 4 adorable Grandchildren. Cautiously walked in the Birthday Boy, as I went and saluted him and escort him to the Sofa chair. The entire family members had congregated at Deepa’s home- 201 Beach Haven-1 to partake in the festivities. Their Son Tarun had flown down from Delhi. Mrs Thakore, mother of Vipul also attended. It was a grand gathering of the entire family of the Octogenarian Commander. Daughter Deepa Thakore is an MBA, a talented classical singer and Hypnotherapist. Her husband Vipul is a Partner with Piramal Group. Their daughter Sama is a refined Singer, with a personal studio at Home. Sama Thakore’s songs can be viewed on Youtube. Son ‘Khush’ is doing undergraduation in Syracuse University, New York. Tarun Sharma is a GM in Exim bank and tours abroad often. Tarun’s wife Somya is a soft-spoken Economics Genius. They are blessed with adorable kids Dev and Aarna. Their neighbours Mrs Pushpa and Dr Alpa Dedia had also joined in the festivities. Dr Alpa is a very dear friend of Sharma's and always on standby. Hard to find such humble and humane neighbours. God bless the Havens.

The Day was indeed auspicious on more counts than one; International Yoga Day; the midpoint of the Year 2019 (182 days gone 182 to go); Master Siddhant Bharti winning the U-7 Open Grandmasters Chess Tournament at Goa; and most importantly it was the 80th auspicious Birthday of Cdr Teck Sharma. I unfolded the Gift packet to draw out the glittering NFMC Memento of the Golden Sail Boat (with a clock ticking precise Time) and on behalf of President NFMC, proudly presented it to Cdr Teck Sharma to the cheerful applause of all present. It was a great glorious moment indeed. At that auspicious moment RAdm NN Anand, scheduled to fly down to US of A in the evening, chanced to ring up to check whether Meena and I were in Pune or Mumbai. Adm was delighted to know of the celebrations and spoke to Mrs Sharda and the Birthday Boy and blessed him.

Commander Teck Sharma hails from Lucknow, but accomplished his schooling from St Lawrence Ooty followed by Graduation in Science from Loyola College Madras, before joining the Indian Navy 1959. He specialised in Torpedo Anti-Submarine Warfare (ASW). and served on board most ships of that era. In mid-1971 he married a beautiful girl Sharda from Gwalior. During the War he was part of the DNI in NHQ. After his promotion to the rank of Commander, he left the Navy to join Merchant Marine(1976-86) and was a Master on a Ship of  ‘Eurasia’ shipping (1982-86), Hongkong flag, German owners.  In 1986 he had an unfortunate head injury on board and was disembarked at the nearest port and boarded on a civil flight back to India. The flight that was via Karachi, disembarked him under partial memory loss. Imagine the harrowing nightmares Mrs Sharda had to undergo till his return home from Karachi. Cdr Sharma narrated how a noble Muslim  exchanged his Dollars for Pak currency to evade any suspicion by Pakis and how the Airport Authorities by looking at his passport made him board a flight back home. It was a narrow providential escape for a former Naval intelligence officer in the enemy land. Adm Awati, Adm Jain and Cdr Pran Parashar were of great help to Mrs Sharda during the crisis and extended all assistance for litigation against the shipping company to get the dues.

Cdr and Mrs Sharma narrated their times in the Navy, Adm MP Awati’s affection for them, as Deepa had presented him with a Horse memento once. Their closeness to RAdm Ravi Kochar (my COS in HQENC in 1995, when I was CAVO-II). Cdr Sharma told us of his providential escape from an impending disaster in Vizag dockyard; how once standing under a load bearing crane his intuition nudged him to step aside, as the load got detached and fell inches close him. Cdr Sharma is blessed with the Grace of the almighty to survive a Brain Haemorrhage 2 yrs ago, to turn an Octogenarian to celebrate with all his near and dear ones in Grandiose style.

An elegant Cake with a broad glowing Candle was laid at the table. Cdr Sharma gently sliced the multilayered awesome Cake laced with an abundance of dry-fruits amidst clapping cheer of his Children and Grandkids singing the Birthday Song. Daughter Deepa helped her Dad to savour the first bite….’ Daughters are precious for a Dad indeed’. Khush and Dev touched their Grandfather's feet in reverence. In this harmonious home, even the household help were called for a snap with Cdr Sharma.

We then moved to the elegant green marble Dining table for a sumptuous lunch. In today’s world where the neighbours behave as strangers, here was their humble Marwadi neighbour Mrs Pushpa, who had joined to be a part of festivities, fetching in delectable Dahi-wadas and yummy ‘Kheer’.


We bade Cdr and Mrs Sharma Good Bye from the bottom of our Hearts. Tarun came down to see us off. As we set course and passed the ‘Jalsa’ on return, we were exuberantly discussing the Funtastic celebrations in honour of Cdr Teck Sharma by their adorable Children and Grandchildren. 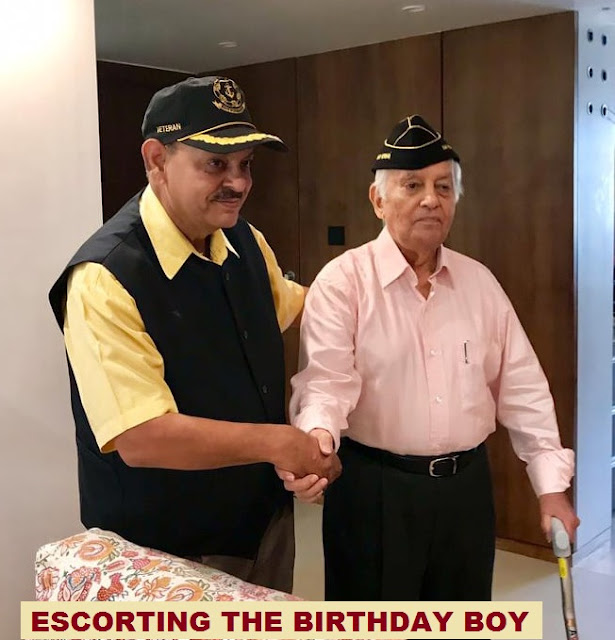 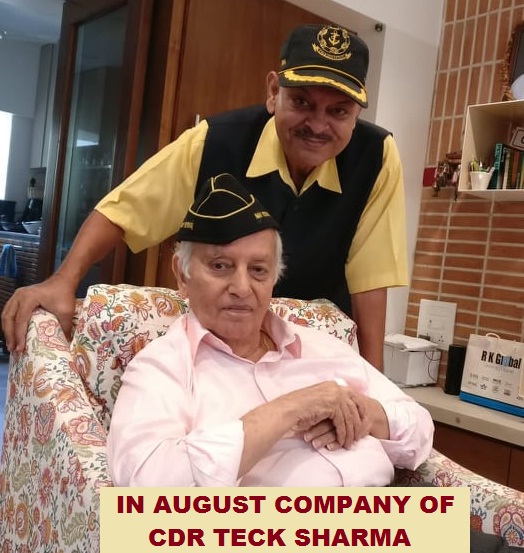 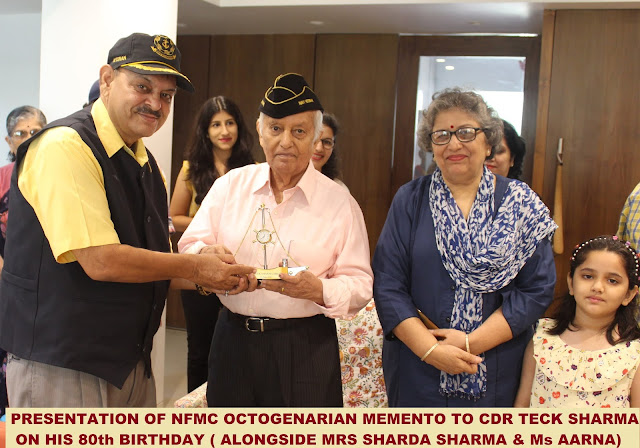 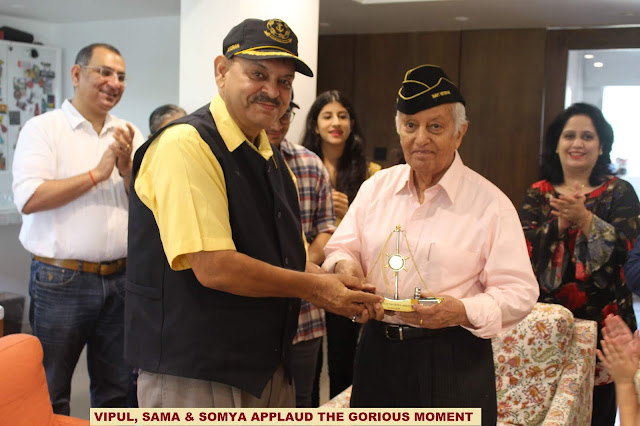 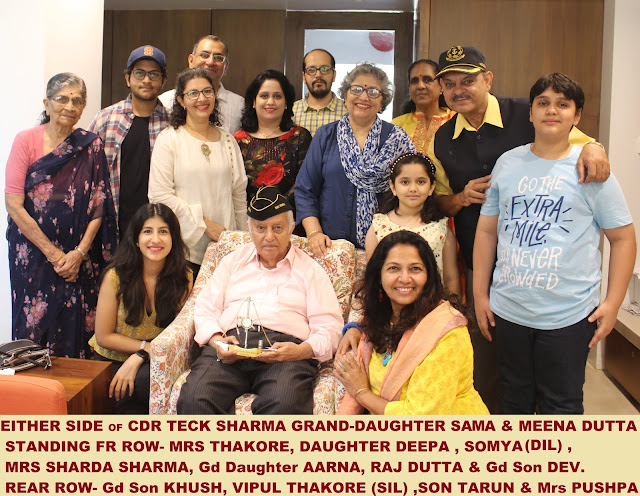 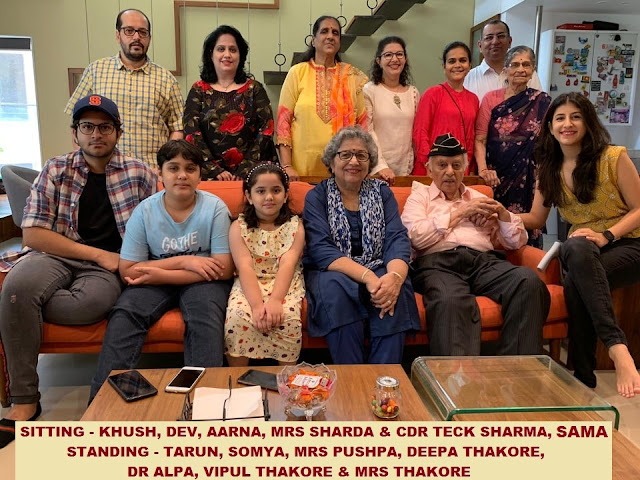 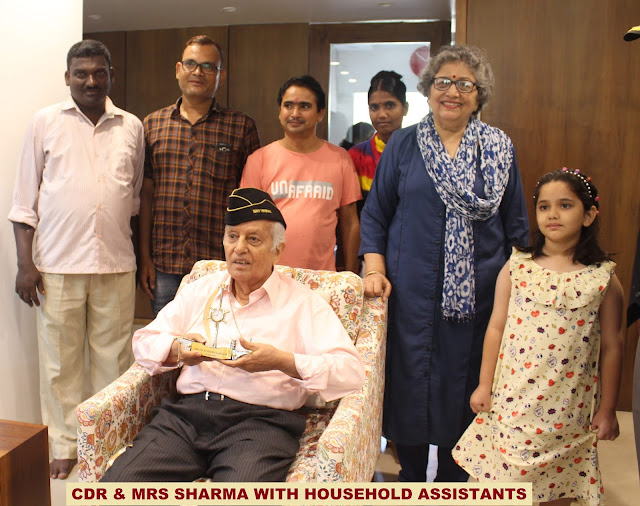 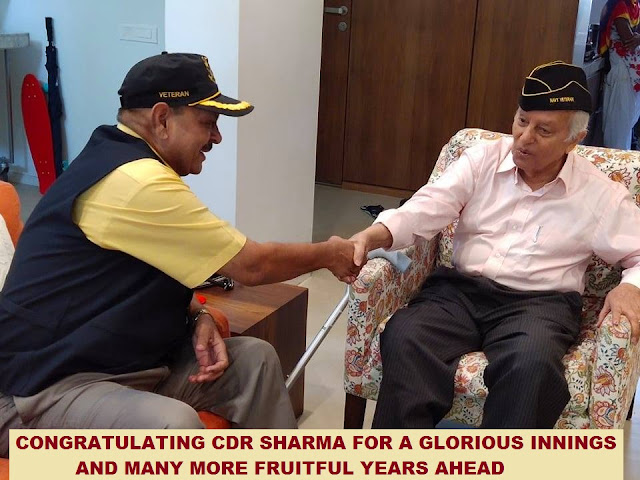 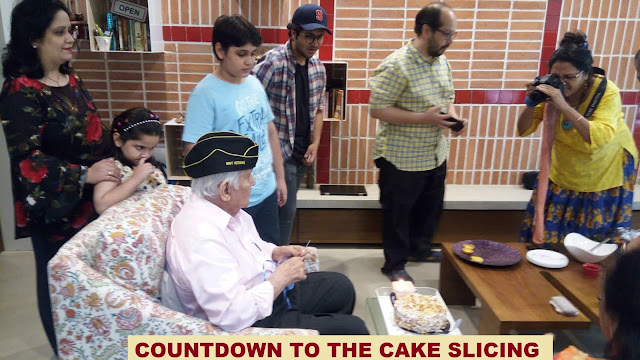 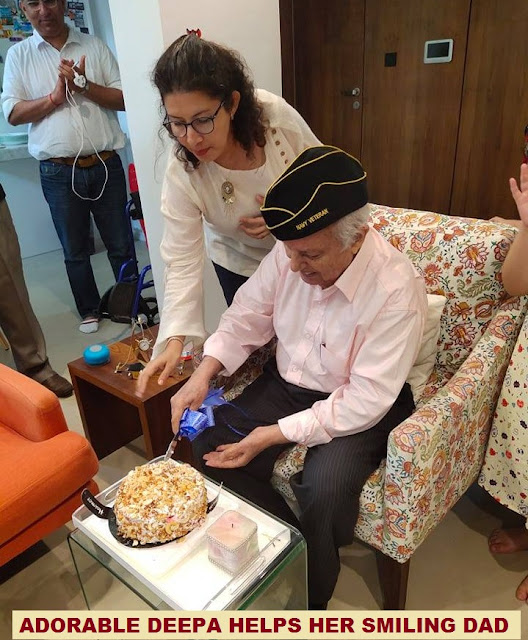 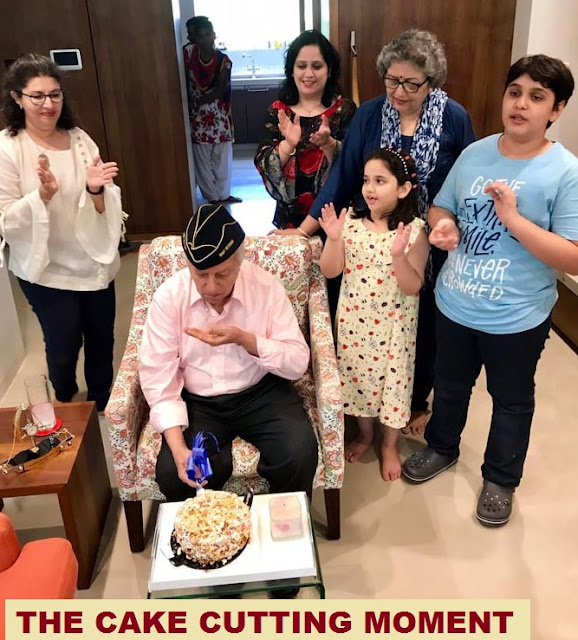 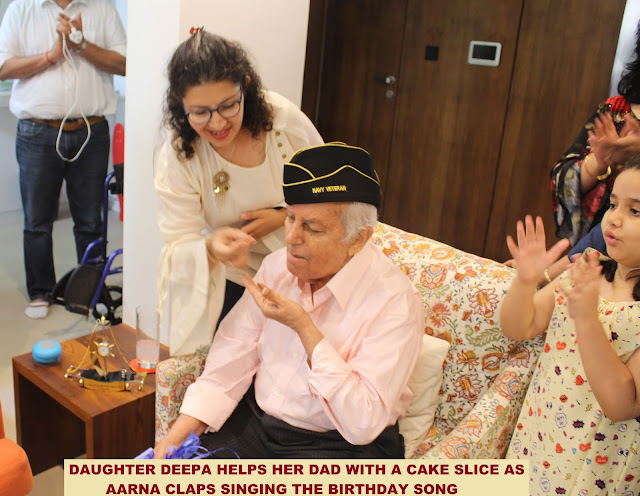 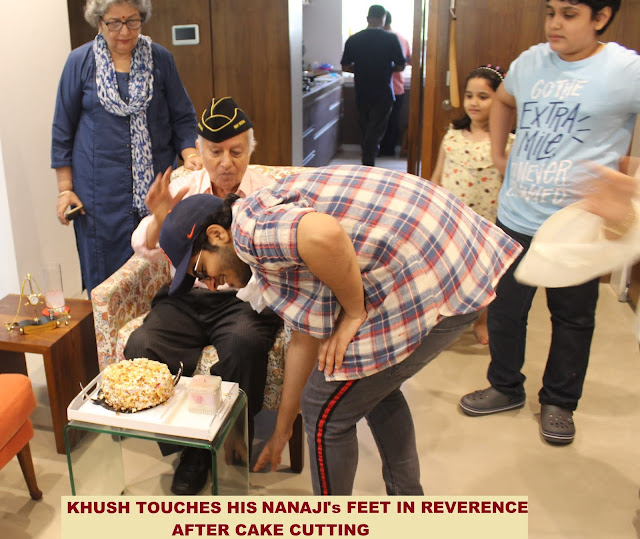 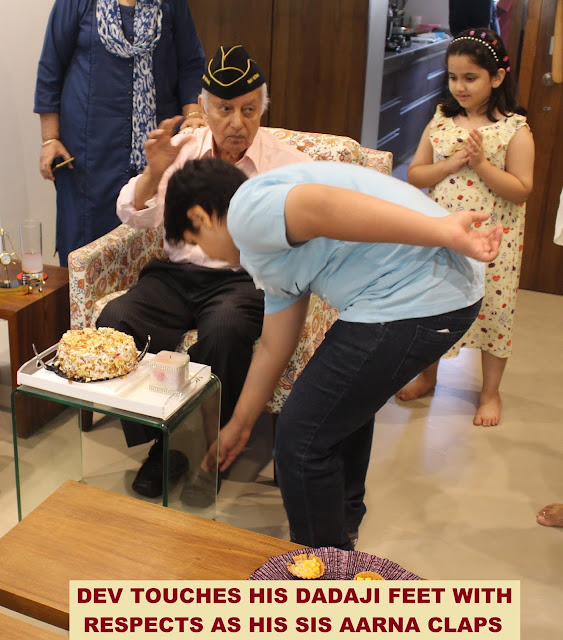 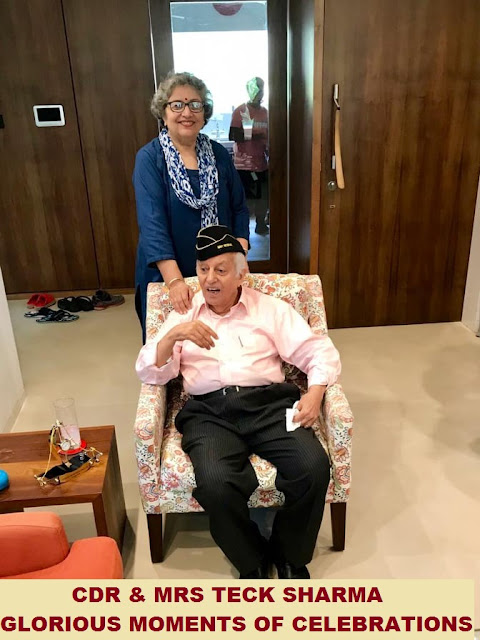 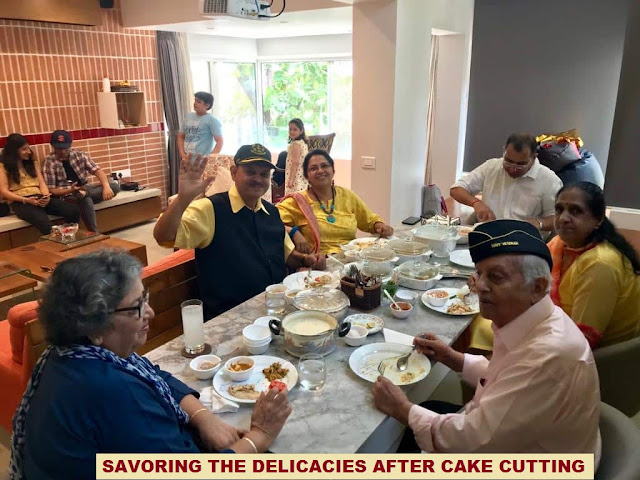 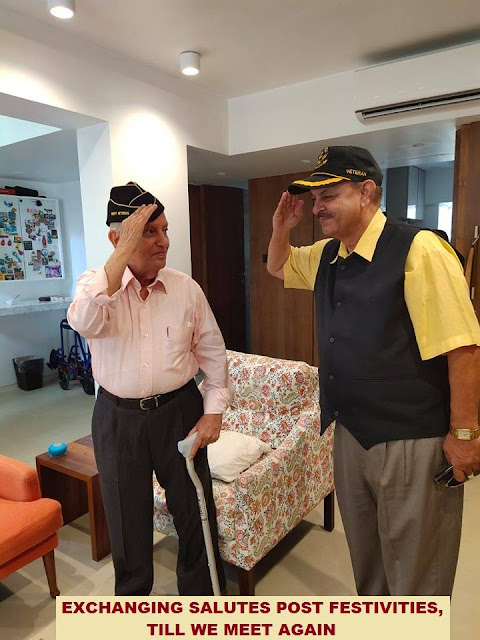 About the Author
Commander Rajinder Dutta (Retd) has been a Naval Pilot and a Qualified Flying Instructor with about 3000 hrs of flying on various fixed wing Aircraft of Indian Navy, viz HT-2, HPT-32, Kirans, Islander, Super Connie, Fokker F-27 and IL-38.
He is a Master of Ceremonies and a blogger.
http://rajdutta26.blogspot.com/
mob-9757429904 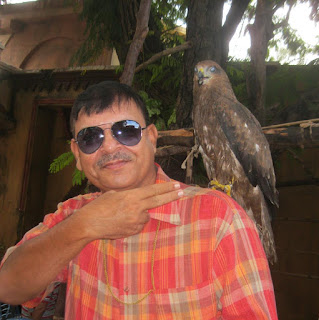