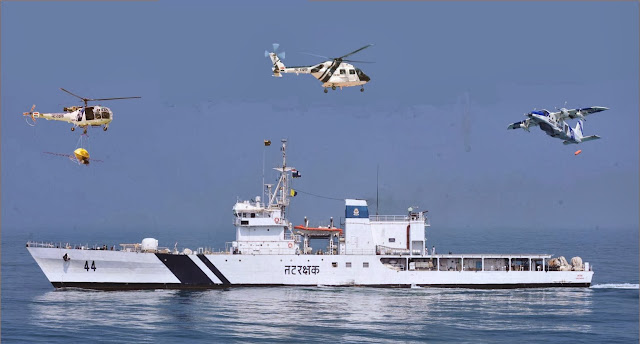 Two weeks prior received a call from Dep Cmdt Vikas Mehra from COMCG(W). It was a majestic delight for Meena and I to be invited to this august assemblage on 01 Feb 2020. Additional Director General (Western Seaboard) Vijay Chafekar had been kind to extend a personal invitation to Cdr Vijay Vadhera, President NFMC and me. I had flown over 600 hrs on the CG beauty - Fokker F-27 in the mid-80s, during deputation to the Premier Maritime Air Squadron CGAS-700 as its commissioning crew, and hence encountering some old buddies was on the cards during the evening. As we drove down the Sea-Link cantilever,  the premises of RHQ(W) as it emerged from the bridge with its blueish glow, exhibited exquisite charm. Even the well-lit parking lot was colour carpeted when our Tata Manza creeped-in directed by the marshalling staff.

IG Anand Badola, COMCG(W), and his Staff welcomed us at the archway for the celebrations. As we stepped in it was a pleasure to meet the ADG(WS), a CG Pilot by specialisation, as he warmly welcomed all the arriving guests. Cdr Vadhera was immaculately attired in his smart jacket and had proudly donned his Veterans side-cap. We went towards the monumental Ice display of ‘44’ depicting the 44th Anniv of the White Water Navy, (Pics below). We exchanged greetings with the invitees from WNC – VAdm RB Pandit, COS, RAdm Sandeep Mehta,  Cmde S Vartak, Cmde Sachdeva, Capt Sri Vatsa and their good ladies. The meet and greet continued awaiting the arrival of our Chief Guest. As His Excellency Shri Bhagat Singh Koshiyari, the Governor of Maharashtra stepped on the central Pedestal, the National Anthem was played. Screening of a CG movie followed soon after the Governer was comfortably seated. The clip flaunted the White Water Navy, that has galloped to formidable force levels in the last 10 years with over 15,000 personnel manning 42 shore stns, 15 Air stns/enclaves, 137 ships and 44 aircraft dedicated to the nation 24x7x365, guarding and securing our coastal assets.  After the movie, an adorable sand artist Sarvam Patel of ‘India’s Got Talent’ fame, showcased his mastery of the Art. He deftly applied some glue on a blackboard and requested the governor to spay the coloured sand on the Board. What emerged was a breathtaking masterpiece of the Governor’s smiling face as displayed in the photo below. This was immediately followed by a presentation of CG Memento by ADG Vijay Chafekar, CCG(WS) to the Governor, in the presence of IG Anand Badola, COMCG(W).

We then moved around and interacted with young CG officers. It was indeed a pleasant surprise to meet my CGAS 700 pilot Cmdt Bharti with his better half Keerti after almost 35 long years. We greeted Cmde and Mrs Vimal Kumar, who had been a Veteran Diver and retd as DoD in NHQ. Cmde Vimal narrated about his tenure as COMCG(A&N) during the mid-80s. He recounted the first landing of F-27 by Cmde Bharti at Campbell Bay on the unpaved runway of WW-II, after I had left the squadron for FIS Tambaram. Even as we exchanged euphoric notes, Meena snapped us and her group of NWWA friends.  It was a pleasure to meet AVM R Hora, AOC MAO and interact with him. He had been kind to offer the AF Officers' Mess for the Veterans' gettogether after the wreath-laying at the War Memorial on the Veterans Day. There was ample time to interact with a few CG Pilots, who were excited to meet me as I recounted my days of CGAS-700.

The Feast was sumptuous with a great variety of main course and luscious desserts. We lauded the Coast Guard’s expansion and thanked ADG Vijay Chafekar & COMCG(W) and his staff for inviting us to this exceptional evening of gala celebrations and prayed for even more Glory to the formidable Force in the coming years. We were the last few to leave, but prior to departure, we went to meet our Naval Band of CPO Babu and his musicians, who had regaled us at INWTC on 8th Jan, during the recent Yachting Races during the Veterans Day celebrations. We also went to convey our appreciation to the classical musicians Shri Harsh Vardhan (Flutist), Mr Yogesh Pathak (synthesizer), Manoj Borliya (Tabla) and Achin Yadav (Octopad). Harsh Vardhan's talented daughter, Renuka who’s learning classical music from her Dad was accompanying him.

Meena snapped herself amongst the row of CG Ships’ Lifebuoys at the exit, even as a CG Navik smilingly approached and handed us over a wonderful CG bag containing  Mementoes and Calendar of 2020. 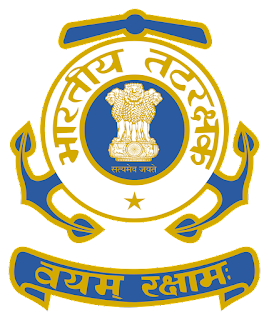 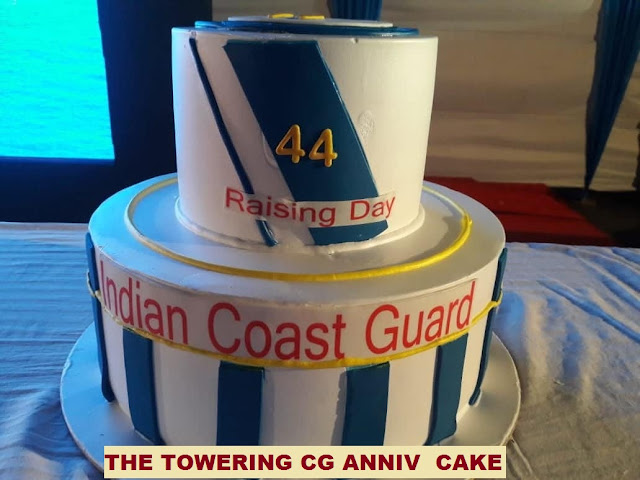 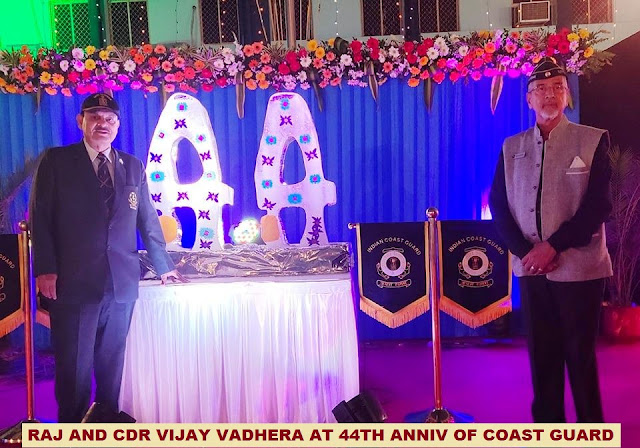 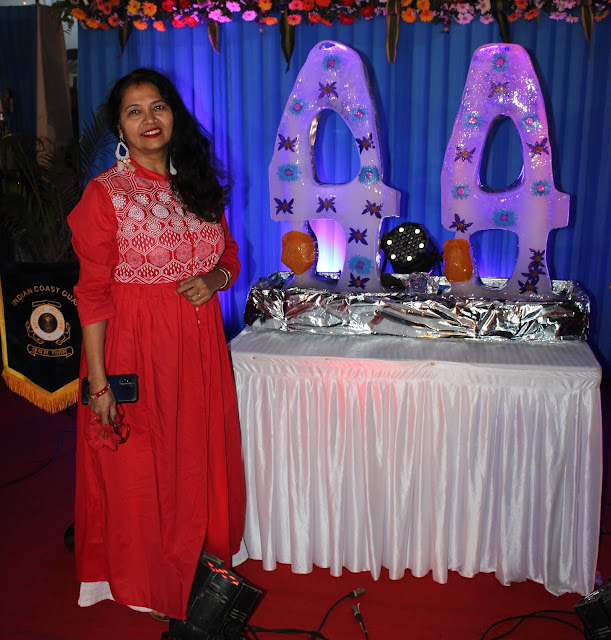 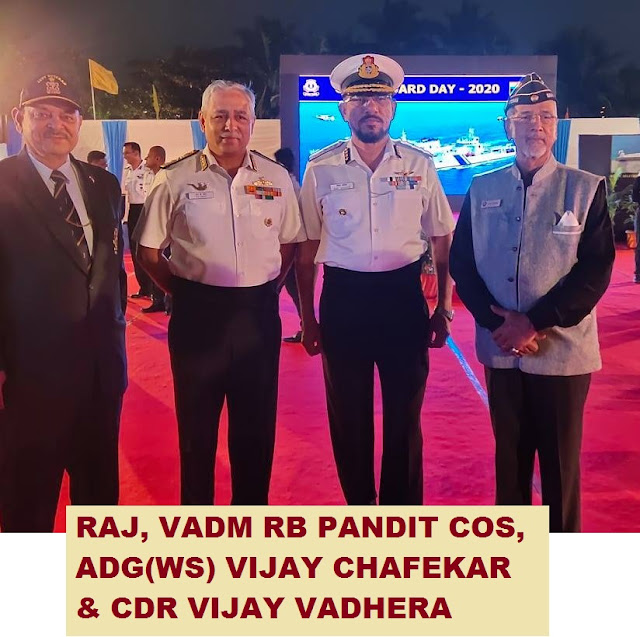 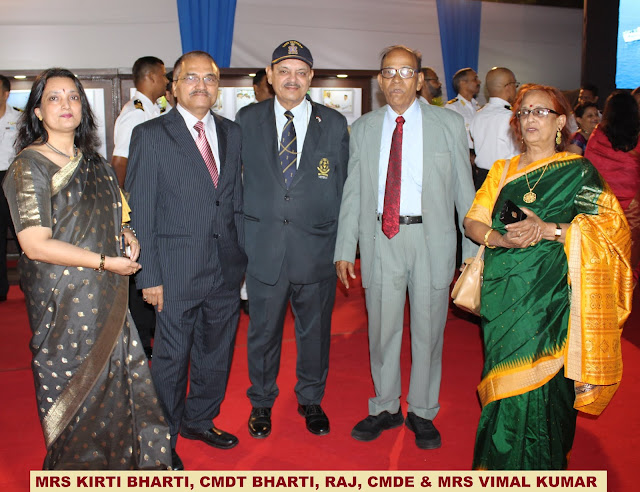 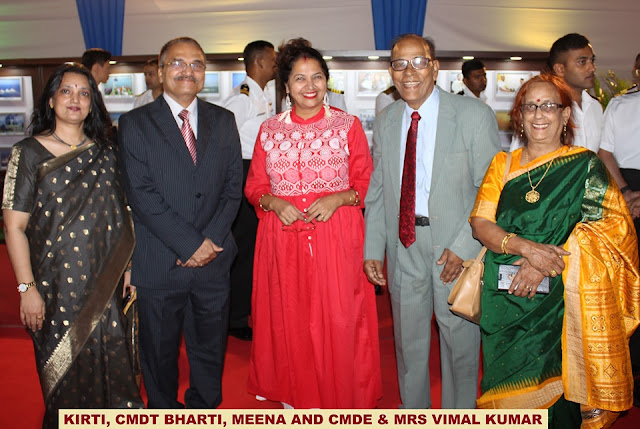 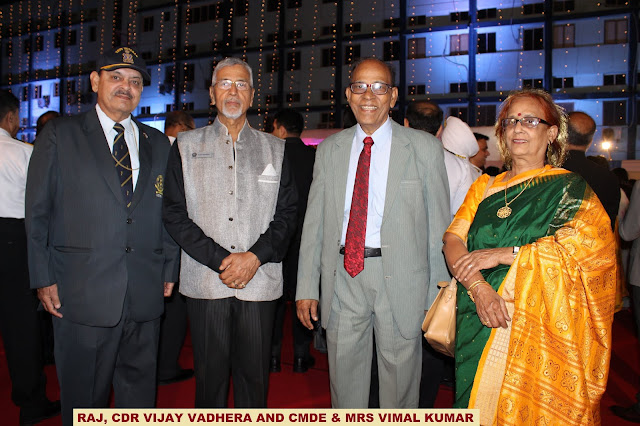 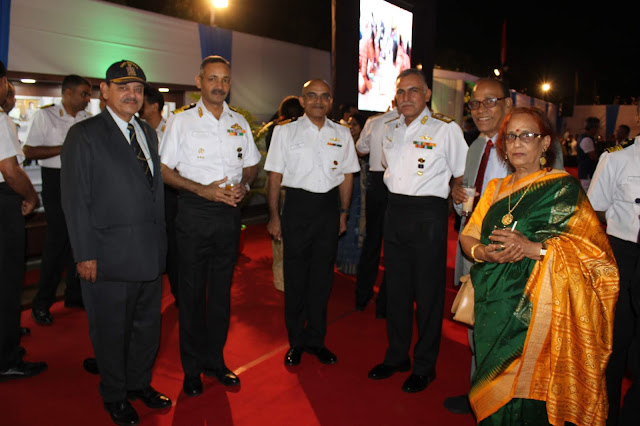 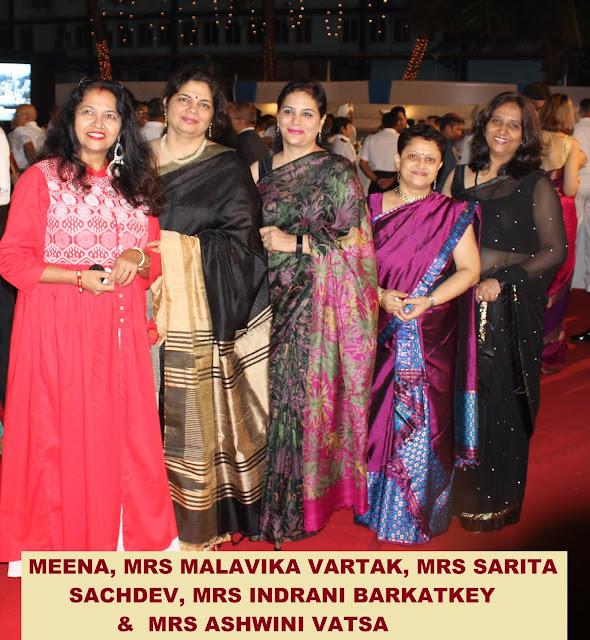 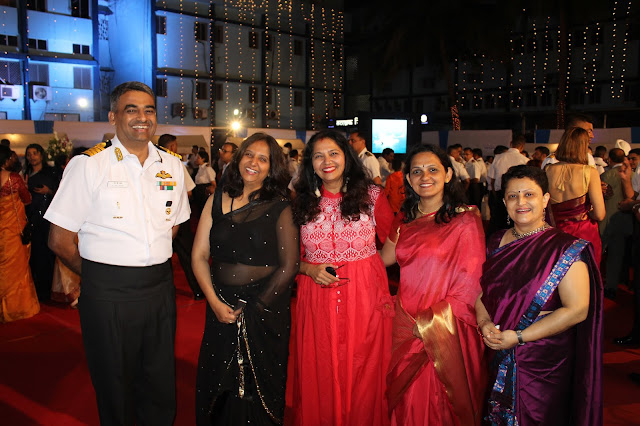 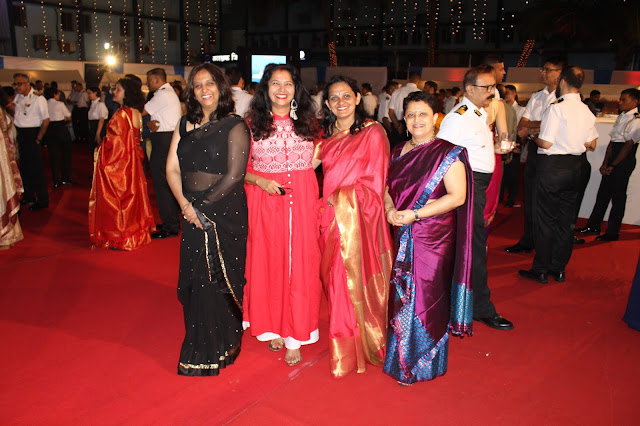 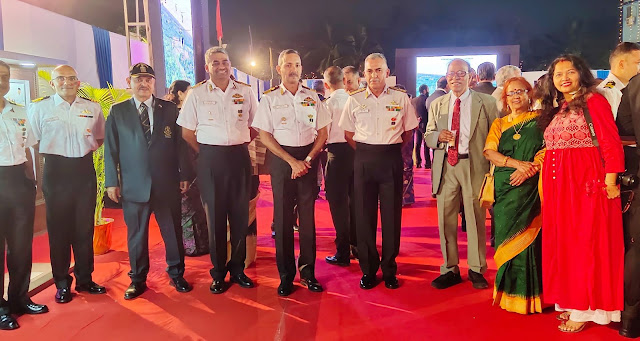 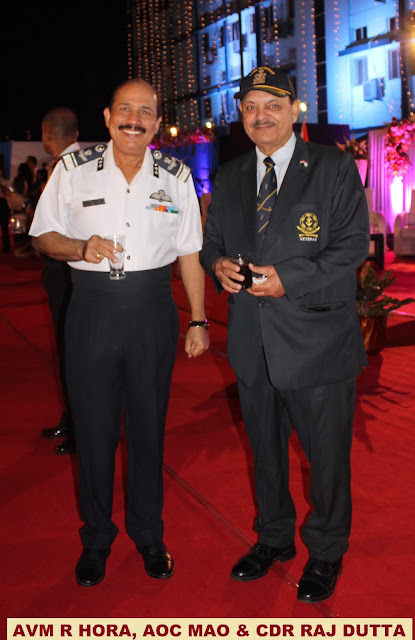 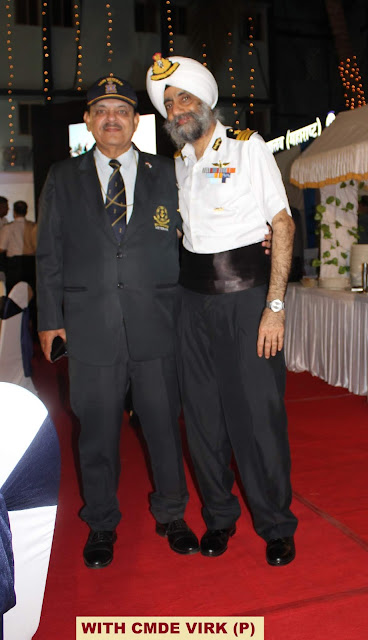 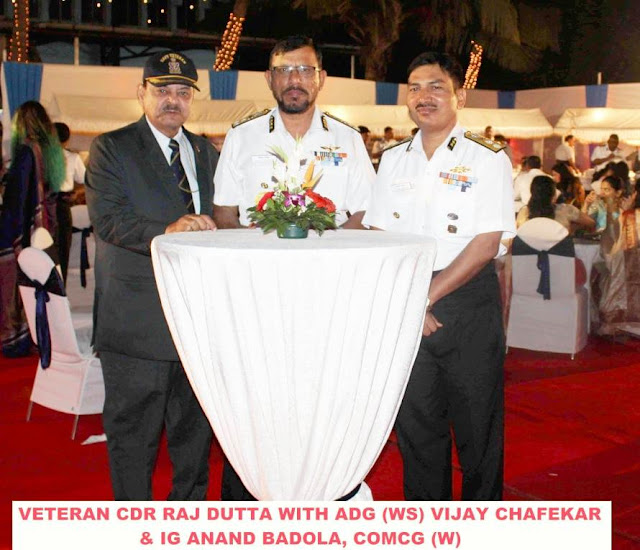 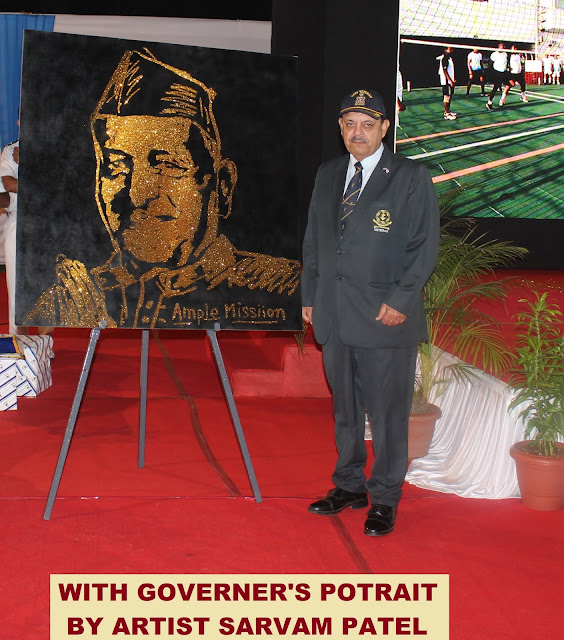 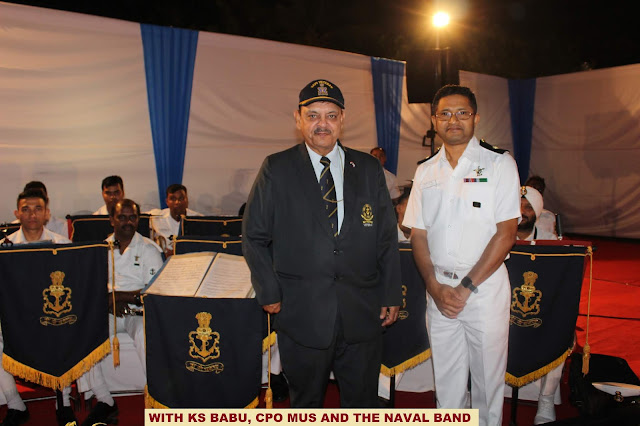 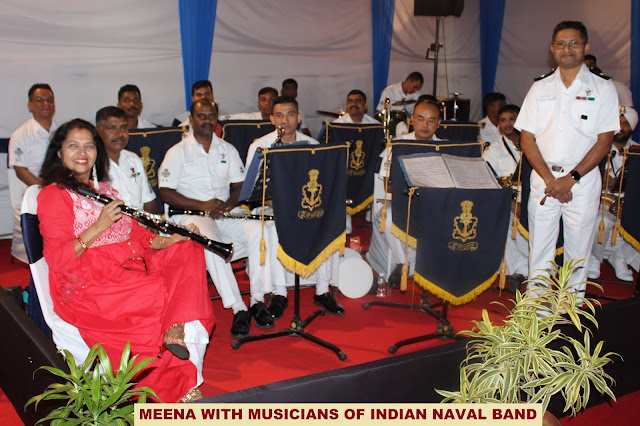 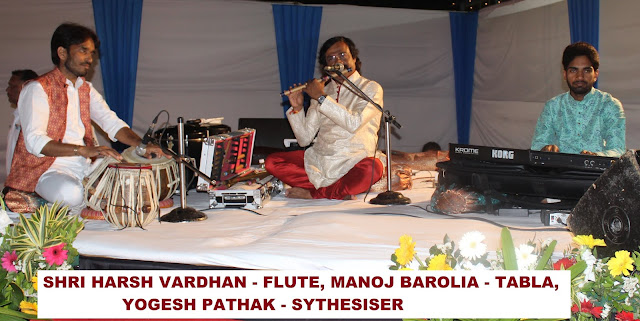 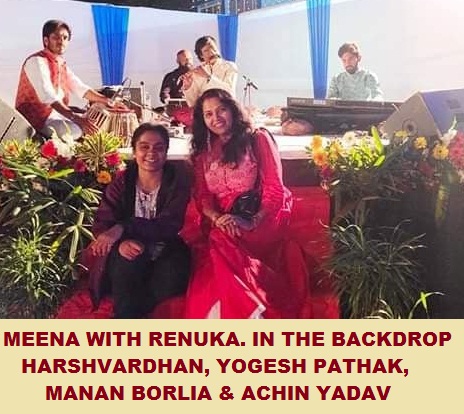 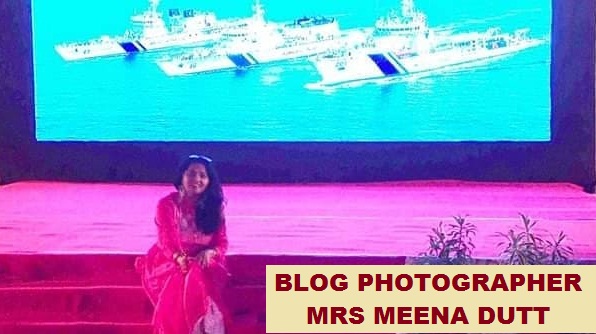 Commander Rajinder Dutta (Retd) has been a Naval Pilot and a Qualified Flying Instructor with about 3000 hrs of flying on various fixed-wing Aircraft of Indian Navy, viz HT-2, HPT-32, Kirans, Islander, Super Connie, Fokker F-27 and IL-38.
He is the Hon Secy of NFMC, a Master of Ceremonies and an avid blogger. 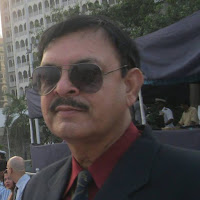