Mother India sheds a tear when her soldiers are ‘Killed in Action’. She sheds a tear whenever her  Veteran Son is ill-treated by his own brothers, for  whom he put himself in the ‘Line of Fire’ at the Borders  serving his Motherland. 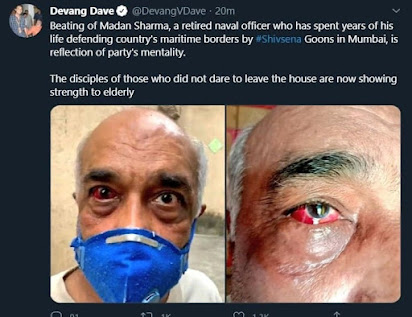 On 11 Sep 2020 (the ominous 9/11)  some 8-10 nefarious miscreants entered the compound of ‘Vasant Pride’ in Thakur Complex, Kandivali (East) in Mumbai and physically thrashed a Navy Veteran Madan Sharma ex CHELP. The Senior Sailor had joined the Indian Navy in 1974 and having served for 16 long years joined the Merchant Navy and retired in 2015.  The assault on the Veteran by the miscreants was captured in the CCTV footage of the building. The miscreants then had the audacity to go to the Police Stn and lodge a complaint against the Veteran for sharing a cartoon meme of CM. The Police came to apprehend the Veteran. The family did not open their door and reported the matter to the local MLA, Mr Atul Bhatkhalkar who came with his team and along with the Veteran went to PS to lodge an FIR against the culprits, who were apprehended for assault but soon released on bail.  The Veteran with bruised face and bleeding right eye was admitted to Sanjeevani Hospital Kandivali (West) for treatment and discharged the next day to be with his anxious and disturbed family.

The incident was soon flashed on most channels of TV and at 9 pm the same evening Commander Vijay Vadhera, NM(G)(Retd), President NFMC was invited for a debate on Republic TV by Arnab Goswami and other Panellists to protest against the assault on the Veteran by political miscreants. Maj Gen GD Bakshi had been very vociferous and lashed out at the goons while Cdr Vadhera in a dignified manner in no uncertain terms conveyed his displeasure at the happening. He narrated how the Veterans all over the world were treated with respect and reverence, but this kind of atrocity cannot be tolerated and shall cast a demoralising effect on the serving community if no severe action is taken against the political goons. 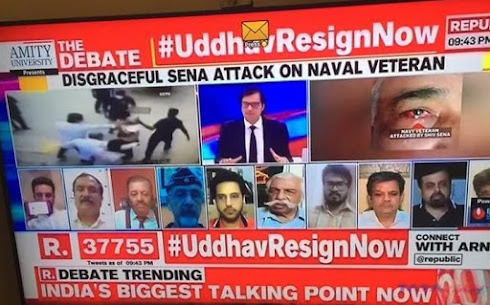 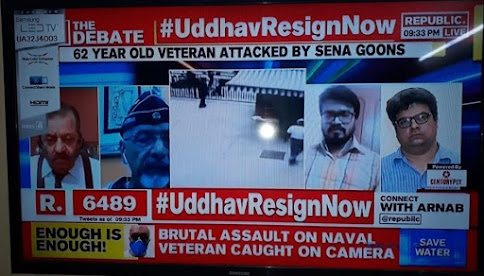 There were protest marches observing social distance and COVID Protocol norms at various places including a 6 hours peaceful demonstration on 14 Sep called in by the tri-services All India ESM Association.at Jantar Mantar in Delhi. The Rashtriya Sainik Sanstha has in a written Appeal requested the President for President’s Rule in the state(Letter placed below). Defence Minister Rajnath Singh personally called up Veteran Madan Sharma, when he was in the Hospital to console him and convey his best wishes for early recovery (tweet below). 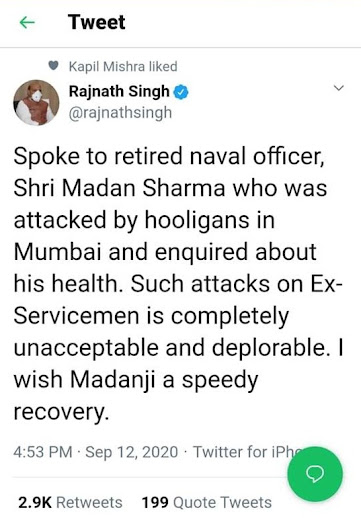 Veteran Madan Sharma and his supporters along with the Area MLA met the Governor of Maharashtra H.E. Shri Bhagat Singh Koshyari on 15 Sep on a courtesy call to brief him on the episode and appeal to him to impress upon the CM to punish the culprits and prevent a recurrence (Pic below). 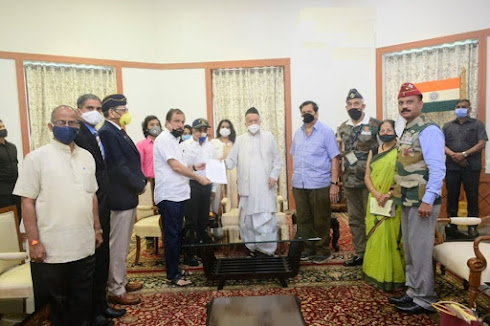 PRESENTING A MEMO TO  THE GOVERNOR 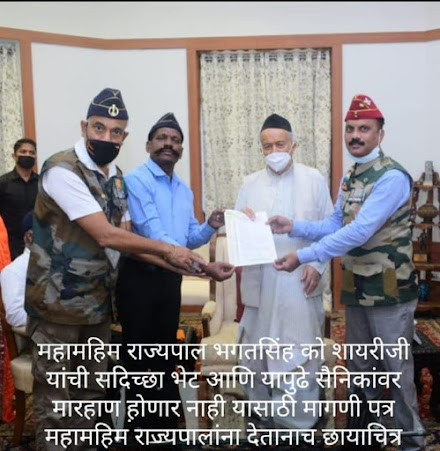 Cdr Vijay Vadhera had scheduled an emergency meeting for the managing committee of Navy Foundation Mumbai Chapter on the morning of 12 Sep and discussed the further course of action in the aftermath of this dastardly event. He sought to meet the Governor of Maharashtra along with two representatives each of Navy foundation Mumbai Chapter and Veteran Sailors Forum to present a Memorandum of Protest on behalf of the Veterans fraternity at Raj Bhavan at 1100 hrs on 16 Sep. However, as the Governor, who holds the additional charge of Goa, had to leave for a week, the meeting had to be postponed. The Memorandum was emailed to the ADC for Governer’s perusal. The Foundation members shall call on the Governer after his return. (the Memorandum is placed below) 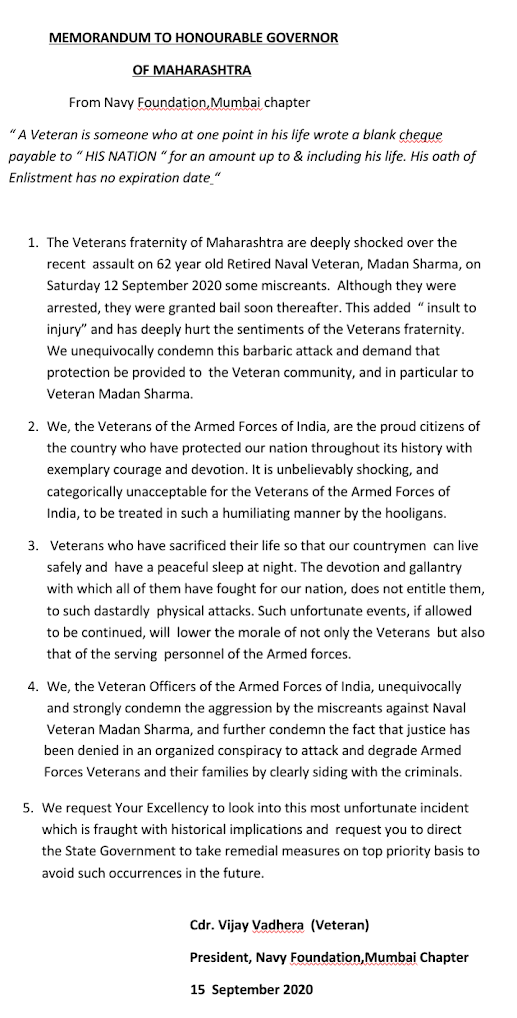 On 16th-morning Cmde Ramesh Kumar (Retd)(02061-H)(L-717) , Meena Dutta and I paid a visit to Veteran Madan Sharma at his Kandivali home ‘Vasant Pride’, as a courtesy call and enquire about his health. The multistory building has a large garden area in front. Located at 5th Floor they have done up the flat exquisitely. The Veteran met us with a warm smile and introduced us to his humble family. His Daughter Sheela, who’s an Ayurvedic Doctor served us hot tea with a smile, even as Veteran Madan was narrating the unfortunate incident. His Son Sunny, who is an IT engineer working closeby took time off to come and meet us. Their mother met us with moist eyes and had to be consoled by Meena. On behalf of the Navy Foundation Cmde Ramesh and I presented the Veteran with Face Shields and masks. The family has thanked the Veteran Foundations pan India for the enormous support they received from all quarters during the crisis. It was a gratifying interaction going back in footprints of time and discussing old times in the Navy. At the end of our visit even as the family cheerfully bid us goodbye, Sunny delightfully came down to see us off. The glint in his eyes was evident despite his blue face mask.

Heartly Thanks a lot to Supporters,

I am very thankful to all media & every individual veteran groups who all are participating in this muhim and support to get justice for me and respect for all the veterans and for the common senior citizens.

Thank you all of you for all the support given to me.

I am not Related to any political party. 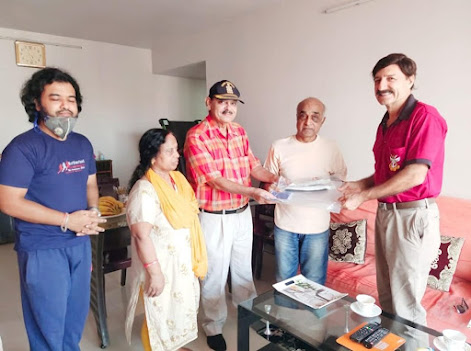 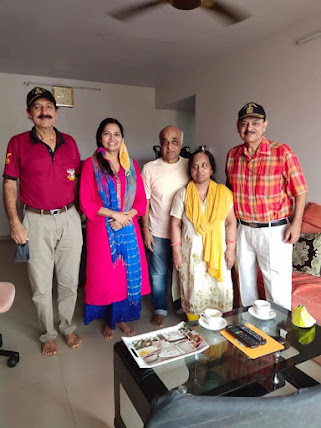 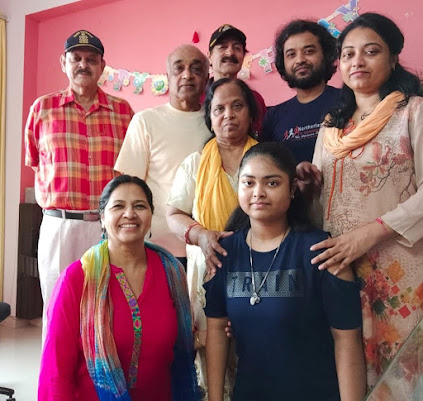 WITH  FAMILY  OF  VETERAN  MADAN SHARMA

On his return from Goa H.E. Shri Bhagat Singh Koshyari gave an appointment to Cdr Vijay Vadhera and his team of Veterans and a Veer Nari for 1630 hrs on 24 Sep. The following members were present during the interaction with Governor:

Cdr Vadhera then presented him with the Memorandum of protest against the assault on Veteran Madan Sharma (on 11 Sep). The Governor read the Memo and assured that he’d write a stern letter to the Maha CM.  Shashikant Mishra sang a Deshbhakti Poem which was well appreciated by the Governor and it was a befitting culmination to a wonderful call-on to the Governor H.E. Bhagat Singh Koshiyari.

After the call-on, the Veterans assembled outside the Raj Bhawan, where Cdr Vadhera briefed the awaiting press regarding the Governor’s meet and handed over the Press-note to the journalists.

The Veterans exchanged greetings, sans a handshake as mandated by COVID protocol, prior setting course to their respective destinations. A rewarding day indeed.

PS: On 16th Sep Six of the miscreants have been taken into Judicial Custody for 14 Days for the mayhem unleashed on the Veteran on 11 Sep. 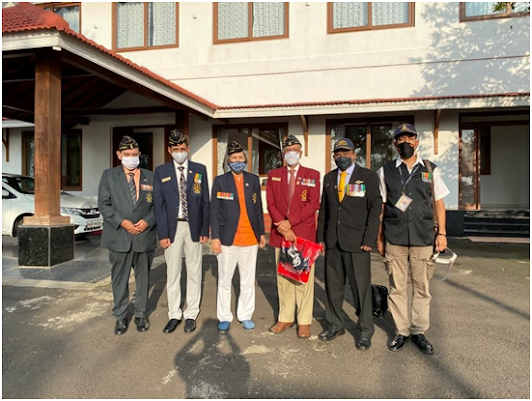 VETERANS OF NFMC & VSF  AT  RAJ-BHAWAN 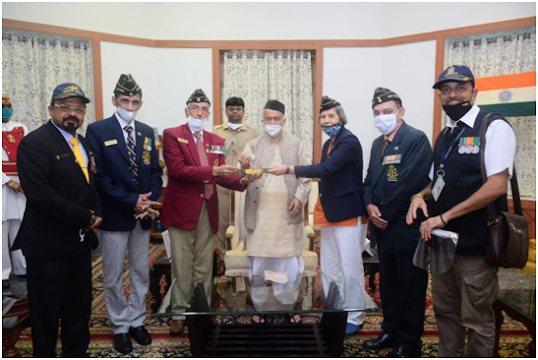 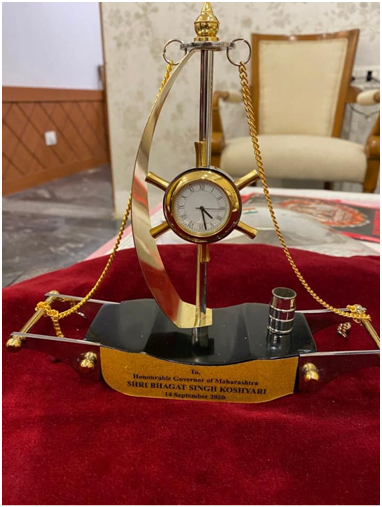 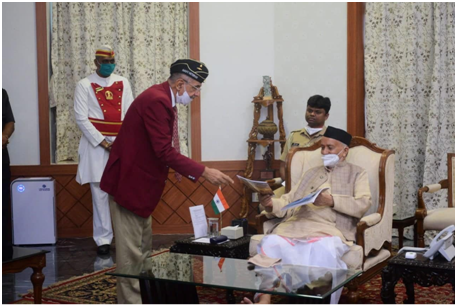 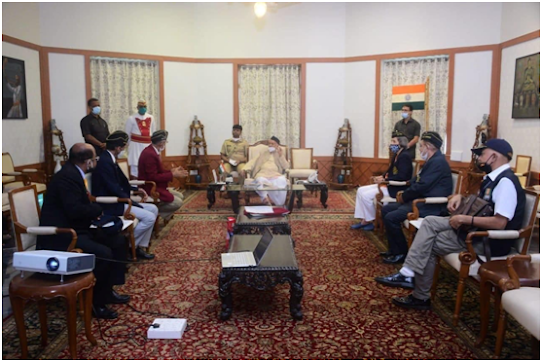 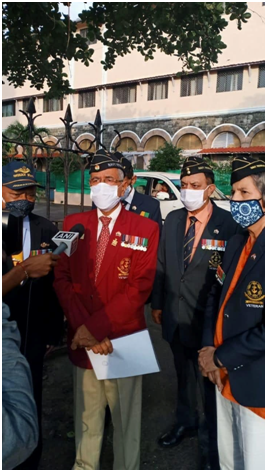 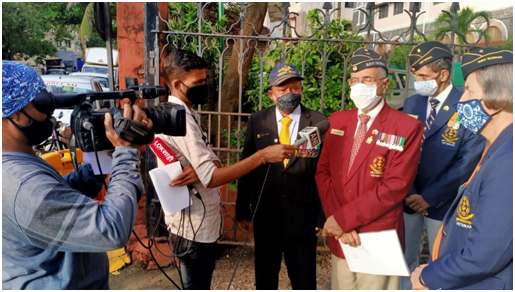 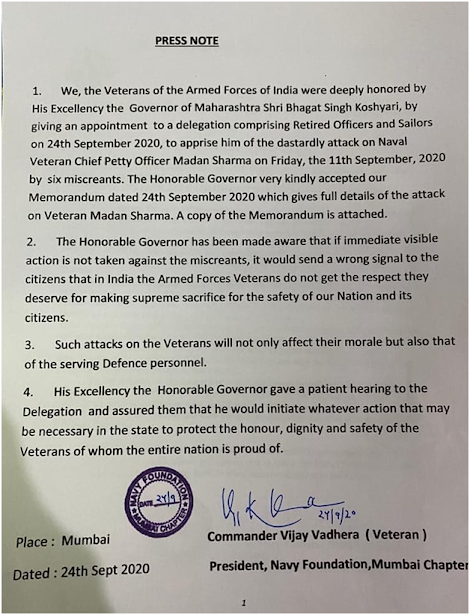 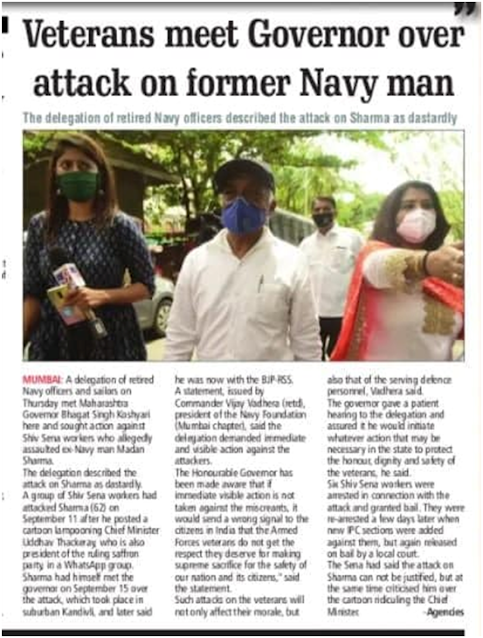