"Too often we underestimate the power of a touch, a smile, a kind word, a listening ear, an honest compliment, or the smallest act of caring, all of which have the potential to turn a life around." - Leo Buscaglia

"And it is still true, no matter how old you are, when you go out into the world it is best to HOLD HANDS and STICK TOGETHER." - Robert Fulghum 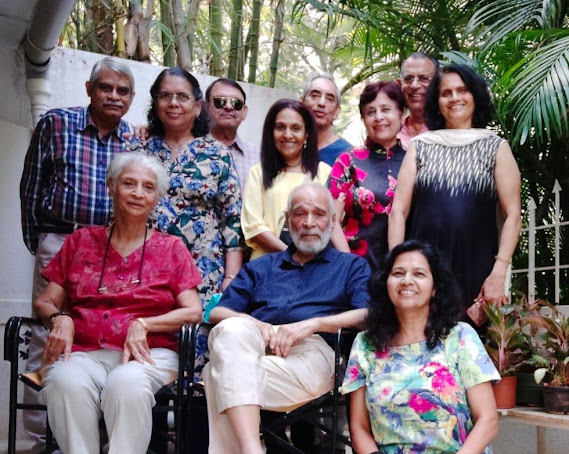 Seldom comes an occasion when like minded Veterans gather to celebrate two  occasions. 26 Nov 2021 was one such solemn Day when a few Naval Veterans of Borivali converged onto the White House of Lt Shreekant Bhende to join the noon revelry. The day when Shreekant turned into the youngest Octogenarian and Cdr Michael Coutinho and his good lady Celia celebrated their 38th Wedding Anniversary. Shreekant, is a dynamic Naval Veteran, who’s the Architect of the Amar Jawan Monument (Blog below).

It would be prudent to glance at the Naval tenures of the celebrity Veterans of the Day:

The vivacious Veteran is blessed with colossal drive and fortitude as that he effectively utilised to craft his Life after early retirement from emergency commission, that’s radiant in his brief resume :

1971-1972  : CO INS BHATKAL in the middle of 1971 operations hospitalised due to a lung infection and placed in permanent medical category 'CEE

1973 : released from the NAVY with medical category CEE

1973  onwards the struggle for survival began. Lured by a senior veteran got in to fishing business, acquired a fishing trawler and operated on the coast of Gujarat for 5 years, losing, defeated but not dispirited started a small scale industry in 1978.

Manufactured, to start with fishing equipment like canoes (a substitute for wooden dug out wooden canoes), surface buoys. This was a boon to the fishermen (in a way to me too commercially). An article in a Marathi magazine was published on his products. He slowly shifted to other products like Knock down building system including wheel house and bunkhouses fot tugs and barges. (an Article in the Inside Outside magazine was published 1987. In 1986 got he got an opportunity to make Cable Tray System in fibre-glass (an import substitution)

There after retired in the year 2000, and settled in Borivali West. On 07 Apr 2017 Lt Bhende with his domain expertise in manufacturing, was instrumental in renovating, erecting and inaugurating the Amar Jawan at the Emmaculate Road Junction in Borivali West by RAdm RM Bhatia, President NFMC, in the presence of  RAdm  S Mahindru (FOMA), Cdr Vijay Vadhera, Secy of the Foundation and other Veterans . (Blog below)

Cdr Coutinho was commissioned in the Navy in Aug 1976. Served onboard IN Ships as EO on Prachand, Hosdurg, Vijaydurg and Amba as Cdr E. Also worked in DGNP(V), DGNP(B), WOT, besides TC & Project Director at INS Shivaji. Also served as staff officer (Engg) at both HQ(WNC) and HQ(ENC). Was the Fleet Engineer officer ( Eastern fleet). His last posting was HQ(ENC) where he opted for premature retirement. After quitting the Navy in Aug 1998, Cdr Coutinho joined Holy Family Hospital, Bandra as Chief Engineer and worked for 15 years before retiring for good and settling down in Borivali.

Mrs Indira Bhende had called me up a week earlier to firm up the program for the celebrations. NFMC Office Asst Sunil had sent across the two Octogenarian mementos to be presented. Meena and Shreekant share an unmatched affinity for naughty flirting that’s evident in the first Video compiled by her. A little before noon Meena and I picked up Veer Nari Mrs Anuprita Paranjpe (W/O Late Cdr SR Paranjpe) living close by in Ashok Van, and drove to Lt Bhende’s abode in Borivali West.

Coutinhos, Saldhanas, Kutties and Jeff Frazers had pre-arrived at the White house. After the Pappiyan-Jhappian, vociferous exchange of best wishes and even before we settled down, Indira Ma’am offered us the drink of our choice with sumptuous small eats adorning the central table. Bhende’s indeed are a wonderful host.

Before the Cake cutting Shreekant and Meena dramatized some crazy antics and Raj narrated a lovely Ode to the almighty praying for longer life to the young Octogenarian.  The sing-a-long Happy Birthday Corus and Wedding Anniversary revelry was video captured by Meena. On behalf of President NFMC, Raj then presented the two Octogenarian mementos to Lt Bhende; the CNS plaque memento from NHQ and the beautiful Golden Sail boat designed by NFMC. Intertwined in the chatter-patter was the Video Conference call from Cdr Vadhera, President NFMC and Mrs Sunita Vadhera, congratulating the Celebrities of the day. The Chinese lunch served was delectable emanating rich aroma that. The sweet dish to follow was the mouth-watering assorted cake helpings. It was a great afternoon indeed, much more fascinating and sensational than depicted by the pictures below, snapped by Meena.

We hailed and conveyed our felicitations to Lt & Mrs Srikant Bhende for the fantabulous Day in honour of our friend Shreekant and the humble and adorable Coutino duo, executed in a magnificent style. Prior to saying Sayonara, all echoed, “Ek group photo toh banta hai”, that was timer clicked in the White house Verandah.

As we said our Good-byes and wheeled out in our Tata Manza, we marvelled at the wonderful day  and carried back memories captured in our camera to be regaled in footprints of time.

PS- To glance at the AMAR JAWAN Blog, please click the link below : 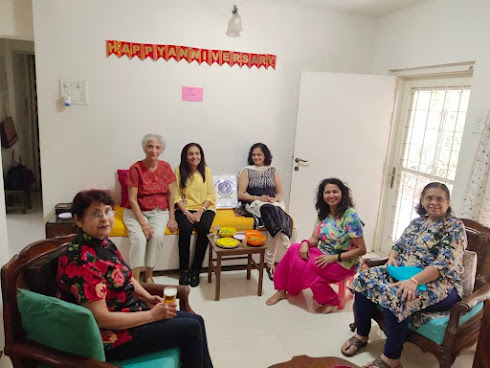 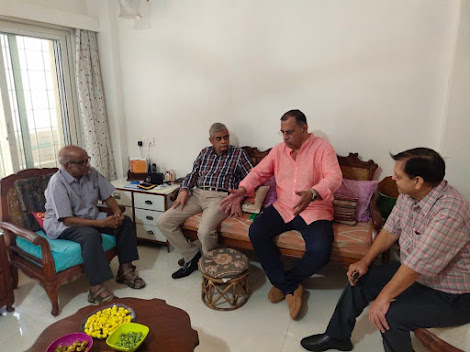 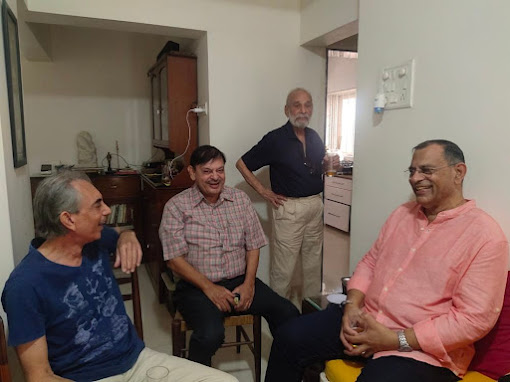 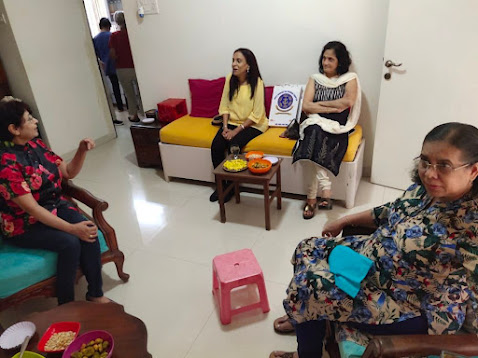 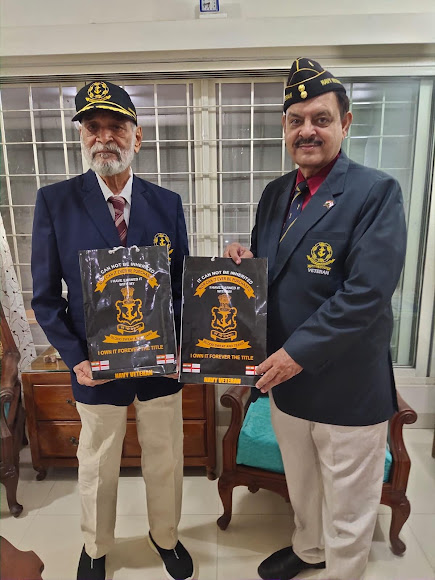 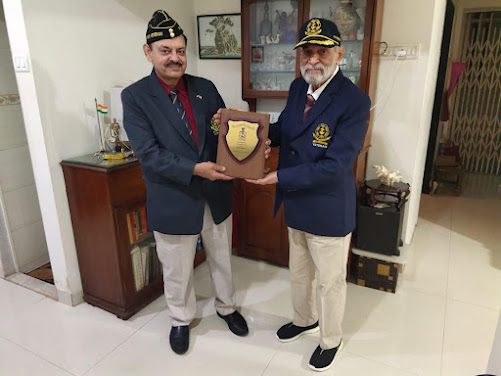 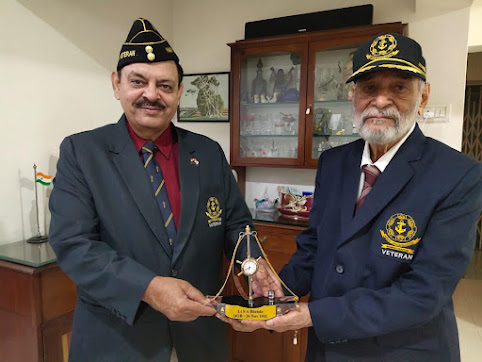 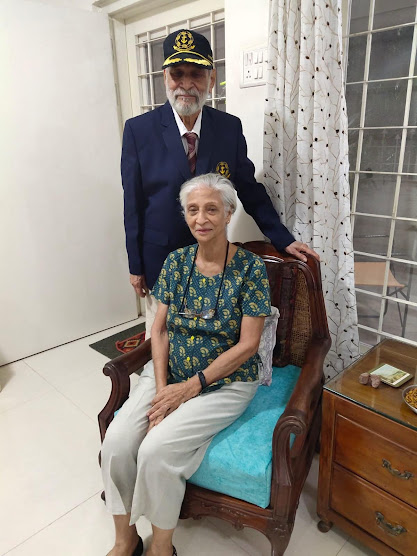 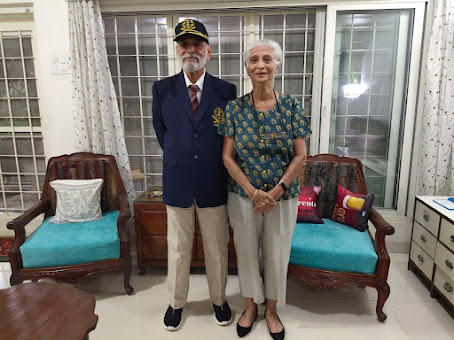 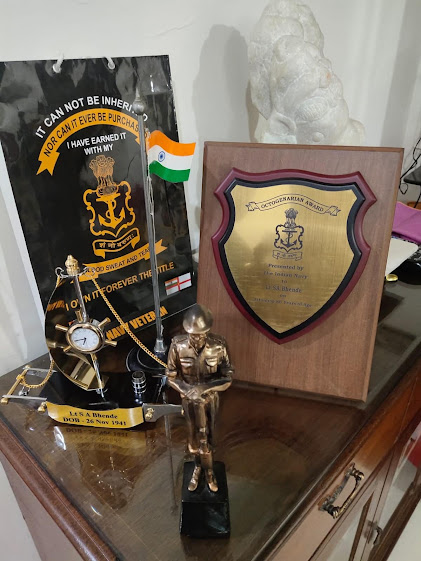 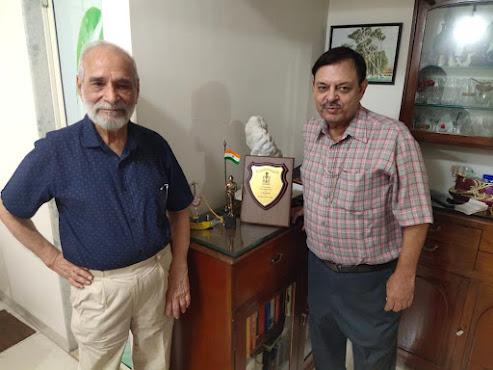 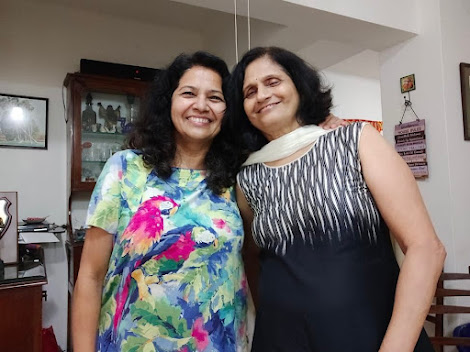 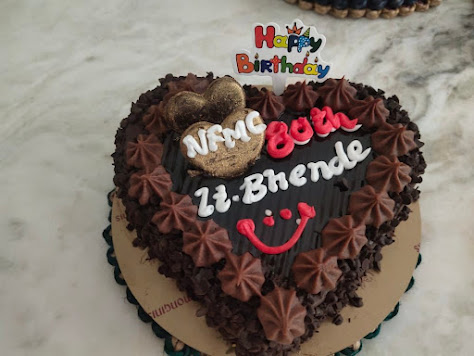 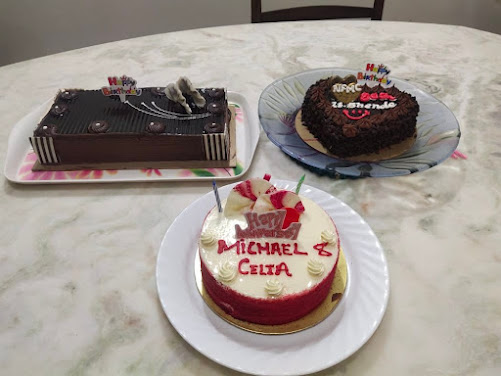 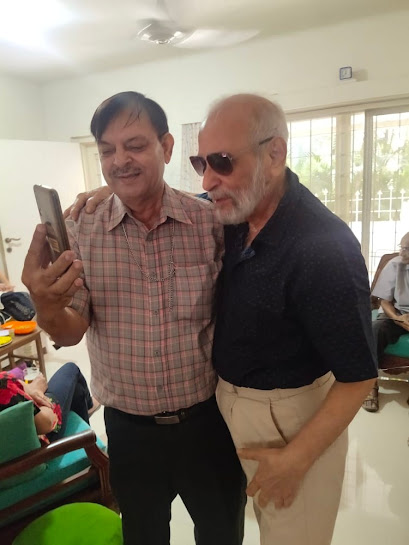 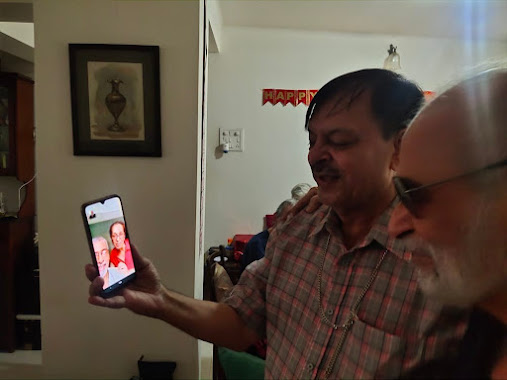 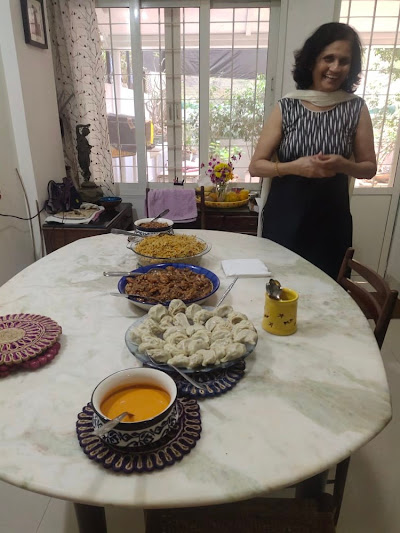 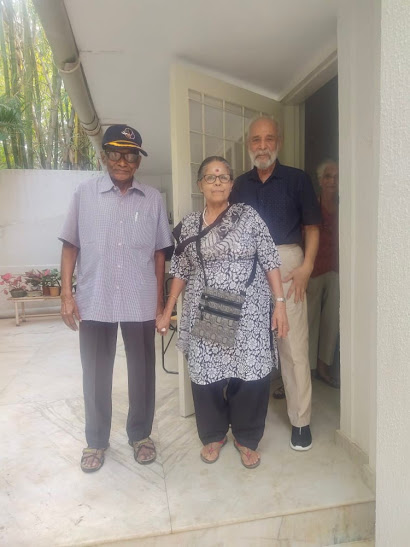 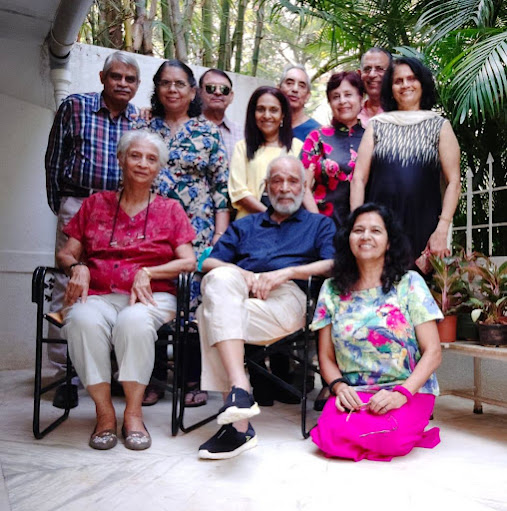 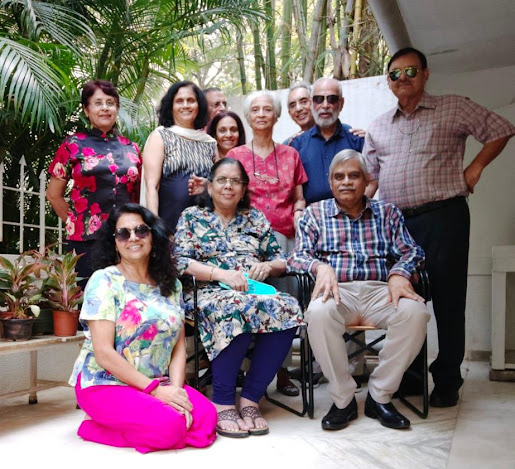 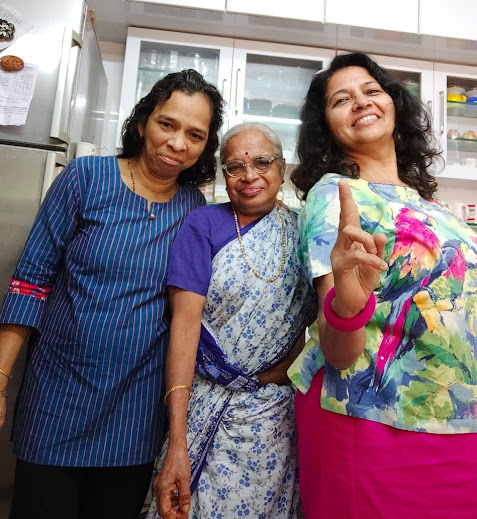 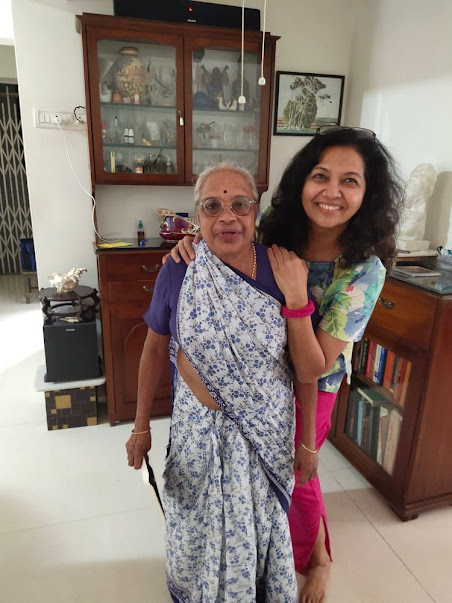