The 73rd Republic Day ceremony commenced with Prime Minister Narendra Modi visiting the National War Memorial, where he lead the nation in paying tribute to the fallen heroes by laying a wreath.  This year's celebrations were more significant because it is the 75th anniversary of India's Independence, and it is being commemorated as ‘Azadi ka Amrit Mahotsav' across the country. For the main parade on Rajpath, on 26th Jan and ‘Beating the Retreat' celebration at Vijay Chowk on 29 Jan, the Ministry of Defence had planned a few new events. Now onwards, every year the Republic Day celebrations will last for a week. The festivities will begin on January 23, the birth anniversary of Netaji Subhas Chandra Bose, and conclude on Martyrs' Day — January 30.  Among the new events planned for the main parade were the launch of the National Cadet Corps' ,  ‘Shaheedon Ko Shat Shat Naman' programme, a grand flypast by 75 Indian Air Force aircraft and helicopters, cultural performances by 480 dancers selected through a nationwide Vande Bharatam dance competition, a display of 10 scrolls each measuring 75 metres prepared during the ‘Kala Kumbh' event, and installation of 10 large LED screens. For the Beating the Retreat ceremony, a drone show with 1,000 indigenously manufactured drones gave a spectacular nail biting coloured performance. 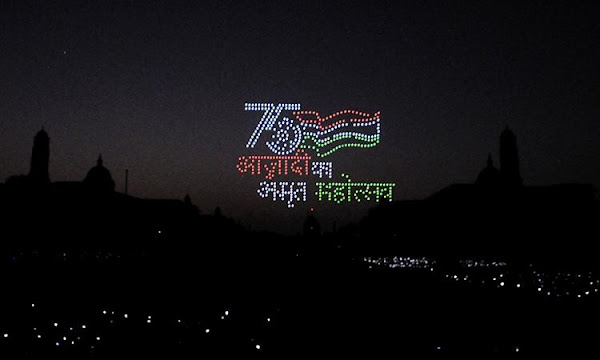 DRONE SHOW AT THE RAJ PATH AFTER BEATING RETREAT

Not withstanding the 3rd  Pandemic Wave, Veterans of Navy Foundation Mumbai Chapter celebrated  the 73nd Republic Day on 26th Jan 2022 at various Schools/Colleges and the local Societies. Cdr Gurbachan Singh arranged Republic Day function at the Mira Road War Memorial…Cdr Sandeep Srivastava, Unfurled the National Flag at his Sunflower Society in Thakur Village, Kandivali. A befitting ceremony was organised by Veteran Capt Rakesh Agrawala staying in Wadala for the residents of Bhakti Park. Our Committee member from Thane, Cdr Abhishek Kankan addressed the students of CBRE IDC online.  Cdr PS Mehta did the honours of unfurling the National Flag in a housing Society at the request of Cdr Vadhera, President NFMC. He was picked up and dropped by the Society and given due honour and respect deserving a War Veteran. Cdr Nozar Engineer was invited to the Republic Day Celebrations by Mithibhai College, Bandra. The Vice-Principal picked him from his home in Ville Pale and after the ceremonial function he was escorted back by the ex-Principal.  In the evening after paying homage to the ‘Amar Jawan’, the monument  resurrected by Lt Shreekant Bhende at Borivali, a few Veterans and Veer Naris converged onto his Divine Bungalow for a relishing  dinner.

“25th January 2022 night ,I polished my shoes, put all my Medals on my Blazer, tie, belt and Navy Sidecap, all laid out for the 73rd Republic Day Flag Unfurling Ceremony in my Elite hsg society & Colony Bhakti Park Wadala East Mumbai where I have the Honour to tie the Flag, then Unfurling or Hoisting ,a task I love to perform twice a year, last 16 years. 26th January 2022, got up early and got ready by 0845 went down and folded the Indian Flag filled with rose Petals and tied it up to the top of the post, ready to be unfurled. All society people assembled by 9.0 and I was asked to do the honours. I have decided to take young girls to Unfurling the flag with me to become Girl Power of the country...We then sang the National Anthem after Unfurling the flag. Small children sang patriotic songs, sweets were distrusted. By then it was 0945, time for me to go the 25 acre garden of Bhakti Park for preparation of Flag folding...I rushed there and found 4 College going girl waiting to do the honors along with me. 1030, more than 250 residents, children, and poor children of a charity school, run in the garden had assembled. We unfurled the flag, sang the National Anthem with Josh. Sweets, hot Samosas were distributed to all. A large number of children and society members took pride in having them photographed with me in my uniform. By 12.00 the function was over and I marched back to my residence in pride, my uniform and my Medals. Attached are pics, videos and one very interesting gesture of a very poor boy who was in a photograph with me.” 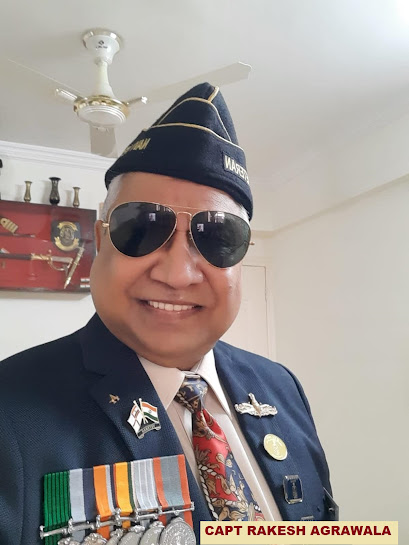 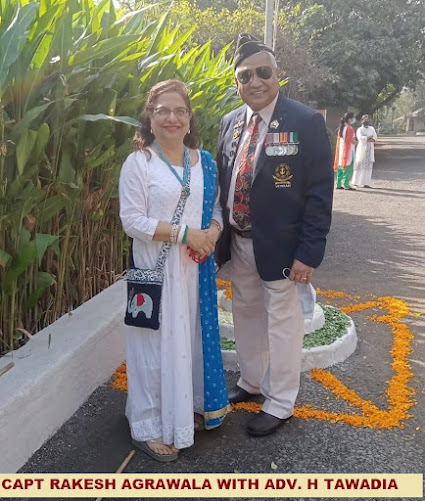 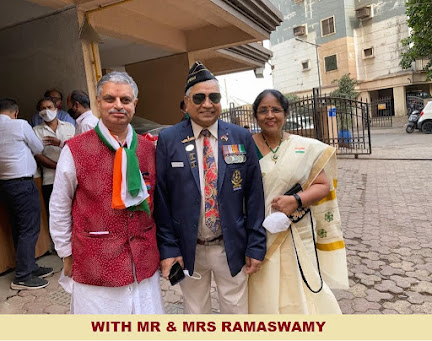 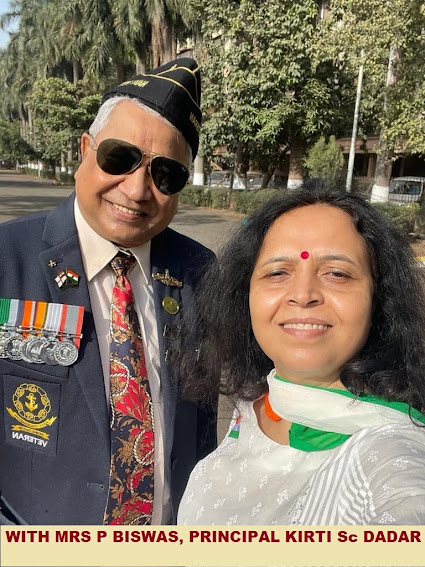 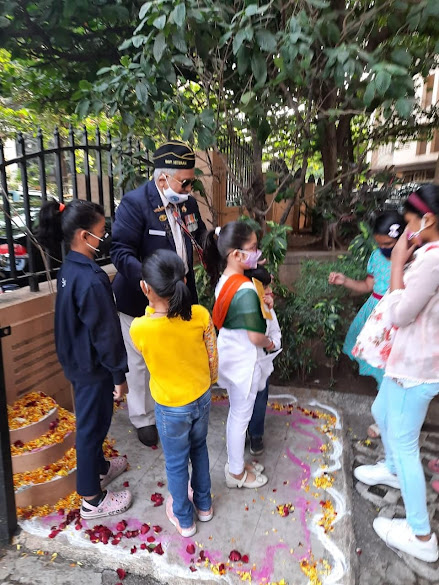 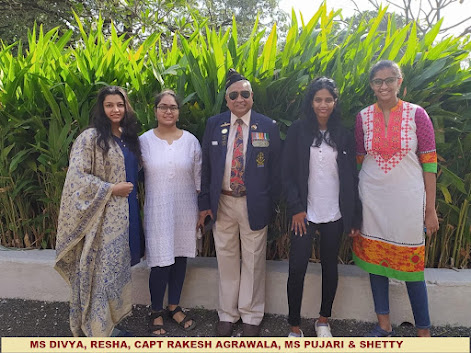 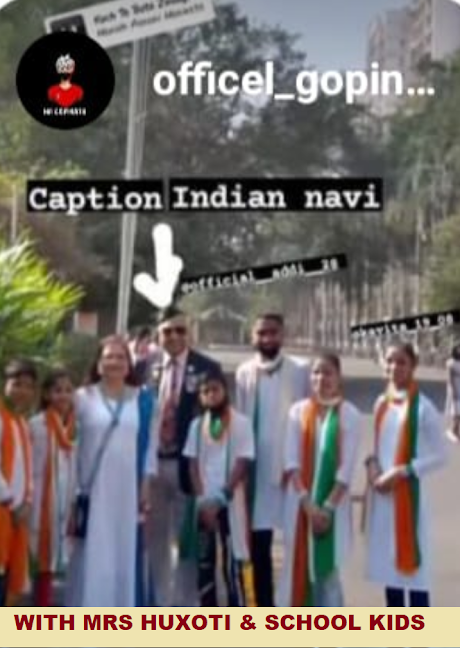 Cdr Nozar Engineer, our NFMC committee member, was invited as the "Chief Guest" for the Flag Hoisting, by the management of M. M. K. College of Commerce and Economics, Bandra. The Flag hoisting was at 0800 h followed by speeches by Cdr Nozar Engineer (Chief Guest), Mr CA Murtuza Kachwala (Guest of Honour) and Dr KS Peshori, Principal of the College, and ended with the "Vote of Thanks" by one of the professors. Subsequently, mementoes were presented to the Chief Guest and the Guest of Honour. Light refreshments were served thereafter. 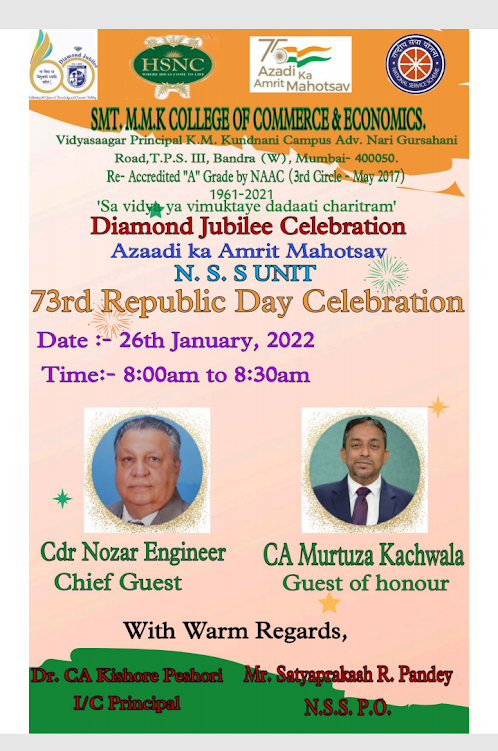 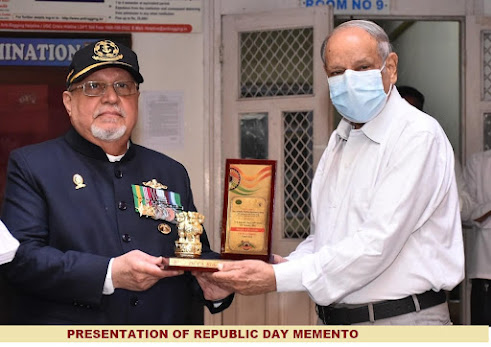 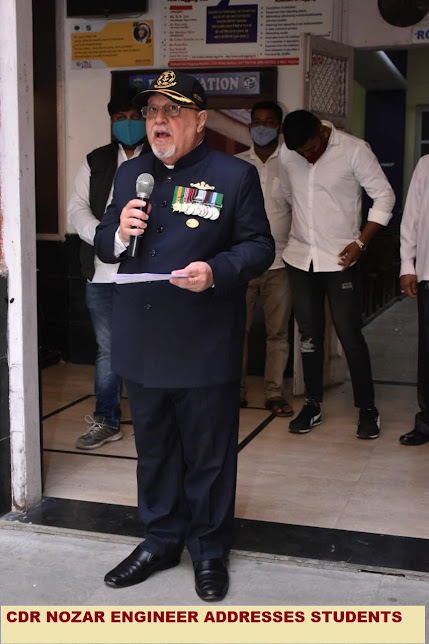 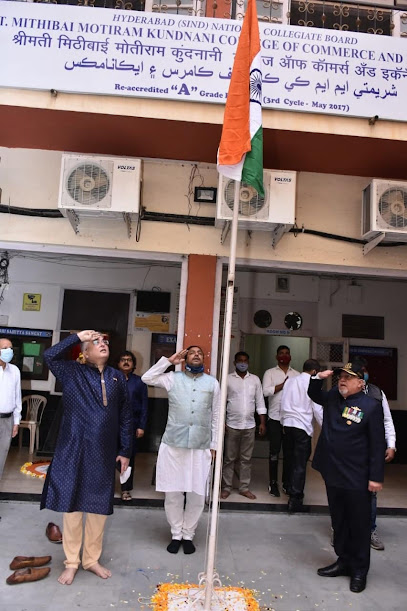 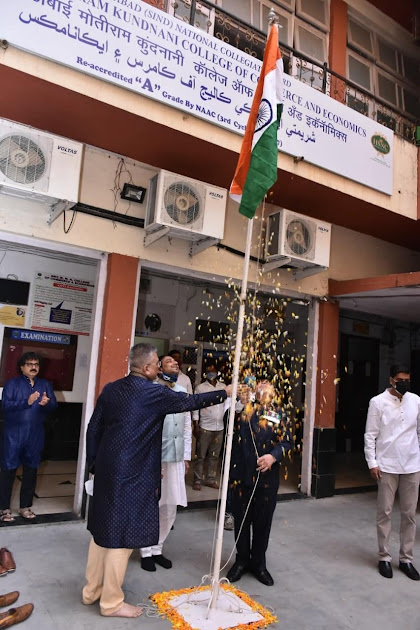 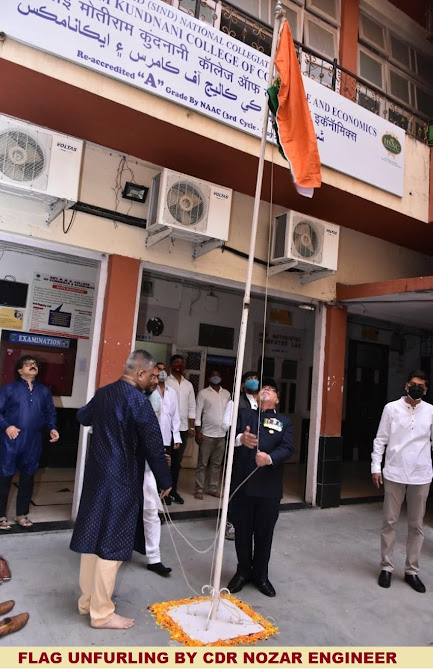 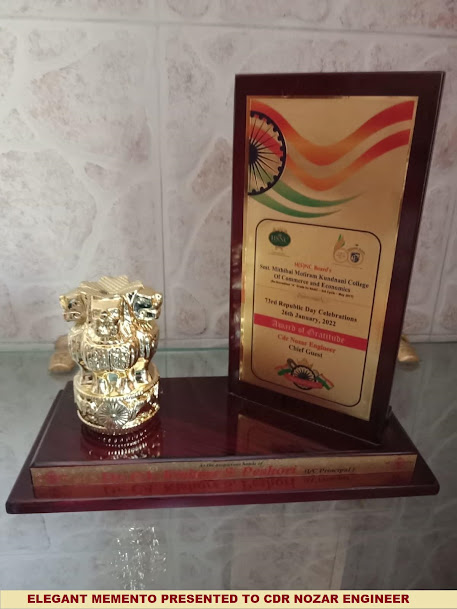 Cdr Pratap Mehta and his wife Shail Mehta were invited to CENCED Apartments at Union Park in Bandra West, by their energetic Hon. Secretary Prof Naresh Nanda, for Flag unfurling ceremony on 26 January 2021 as guest of honour. The function was well attended by enthusiastic members, and their families. Prof Nanda, a Chief Engineer and presently a senior faculty at LBS Nautical College in Mumbai, meticulously organised the function to minutest details. 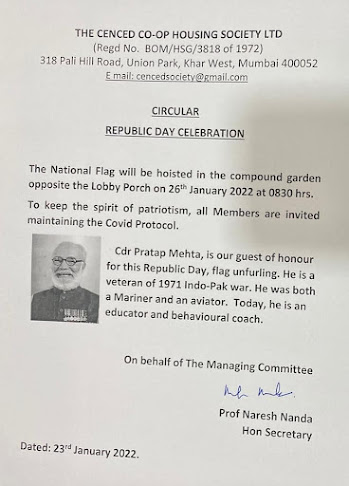 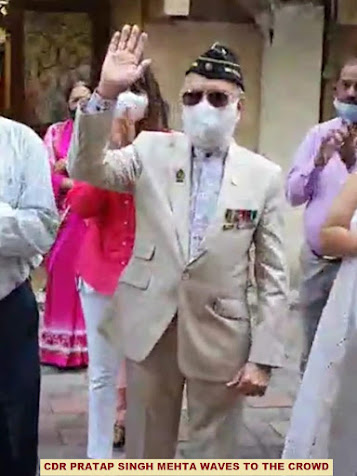 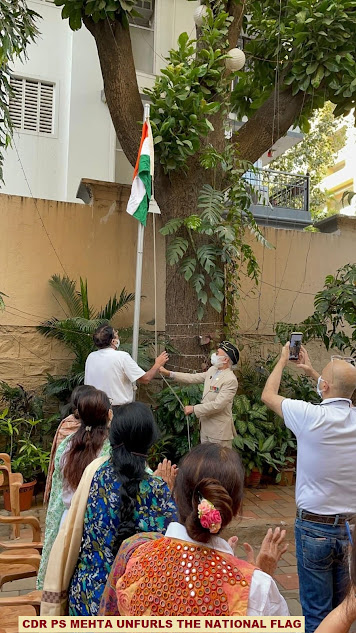 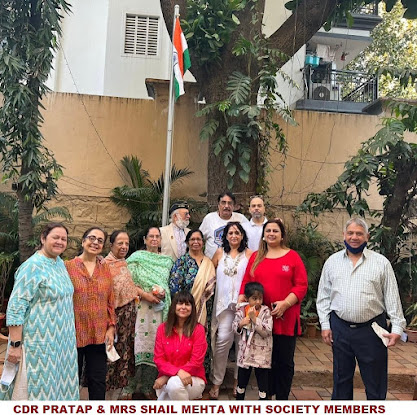 The Thane Committee Member of NFMC was invited to address the students and members of CBRE IDC online, in their celebration of 73rd Republic Day. Abhishek is a Gallantry awardee and was an active member of Ocean to Sky expedition and summitted the Everest. Never to rest on past laurels he is presently involved in building the Railway Tunnel and is addressed as the Tunnel Man by Cdr Vadhera, President NFMC. His inspiring stories kindled the soldierly jazba in his online audience. 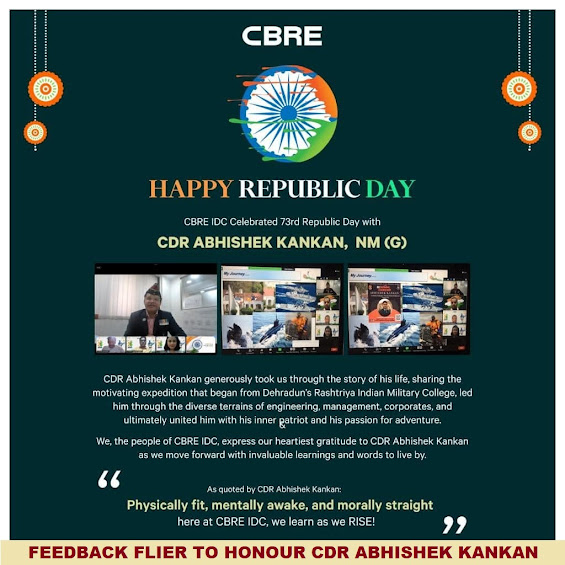 A Programme was arranged to celebrate 73rd Republic Day at our very own “Amar Jawan Memorial” ,which was established with the passion and dedication of the Federation( consisting of 20 Societies), Members and Veterans duly sponsored by Mr Himesh Shah, owner Yes Prosper Spinning Technologist. The Memorial was inaugrated on Army Day, 15 Jan 2019 by Cmde Biman Mistry Chairman of Bombay Ex-Servicemen Association.

The Programme commenced at 9.15 AM by unfurling the National Flag and singing of National Anthem. Floral tributes to the National Martyrs were paid by the Veterans followed by the Members of the Management Committees and residents present on the occasion. The Welcome Address was given by the Chairman of Management

Committee of Federation. A colourful variety entertainment programme was presented by Children of the Federation. The programme was attended by around 80 to 100 residents of the Sector including Ex-Servicemen, ladies and children. On Completion of the ceremony, Chocolates were distributed to all the people present for the ceremony. 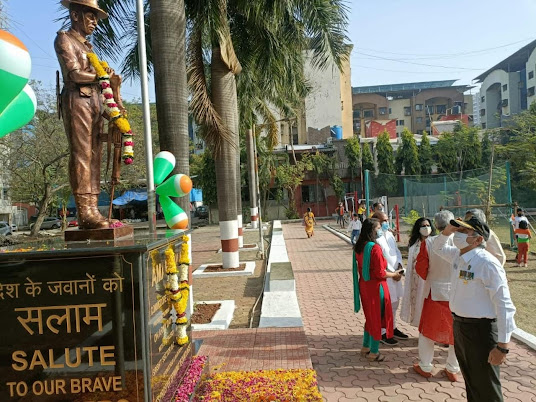 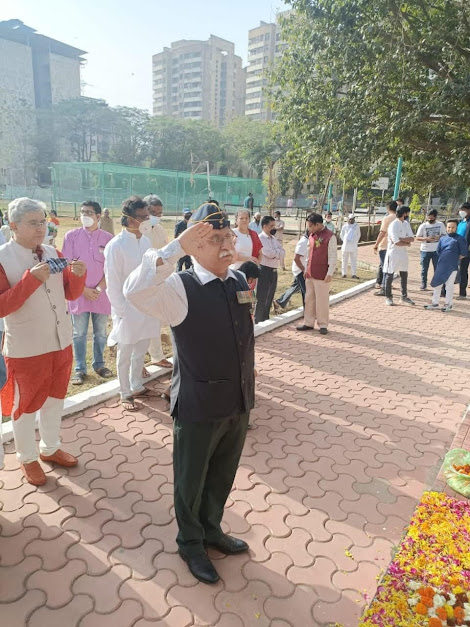 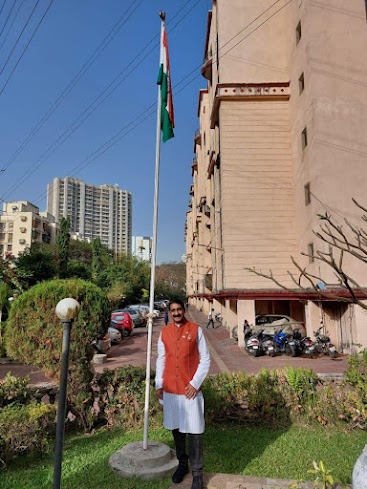 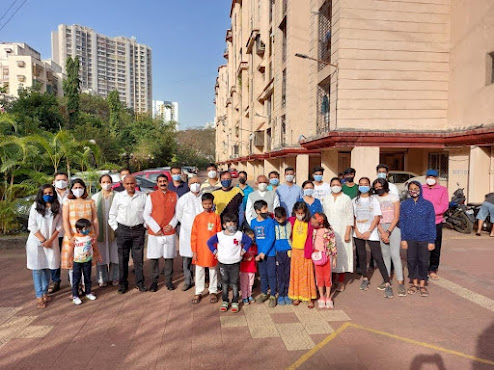 “By 15 January 2022 veteran Lt. Shreekant Bhende was getting restless. The daily news papers, Tv news, WhatsApp messages belted out dismal news of resurgence of Covid’s 3rd wave with it's Omicron variant that was spreading it's tentacles all over Mumbai. Would the gathering on 26th Jan be stalled even this year too….was the question playing on his mind.

He gave in to the scare and on 19th of Jan 2022 announced the cancellation of the gathering in the Whats App group. He planned to tag in senior veteran Cdr Kutty and together pay a quiet homage to the martyrs. Then suddenly a knight in shining Armor emerged, Cdr K. K. Sharma posted a message requesting 5 volunteers join in, to pay homage to the martyrs. So, we did gather, albeit fewer in numbers, but higher in spirits. Veer Naris Mrs. Anuprita Paranjape and Dr. Shreelatha Banger placed wreath at monument. Others who joined the gathering included Cdr & Mrs M Courtinho, Cdr & Mrs S Shrivastava, LtCdr Rajeshwari Kori and Cdr KK Sharma.

It was an emotional moment for the veterans, since we had lost three of our enthusiatic members, Cdr Paranjape, Veer Nari Kashibai Kori and Cdr RS Sharma within a year. After the ceremony  the Veterans and Veer Naris proceeded to Lt. Bhende's abode for home cooked delectable vegetarian dinner by Mrs Indira Bhende. Three Cheers to Lt Shreekant and Mrs Indira Bhende, the generous hospitable hosts of the evening .... We should meet again on 30 Apr for celebrating the 6th Birthday of ‘Amar Jawan’....A sentiment that was echoed by the 26 Jan WhatsApp Group, created by Senior Veteran who's young at heart, Lt Shreekant Bhende. 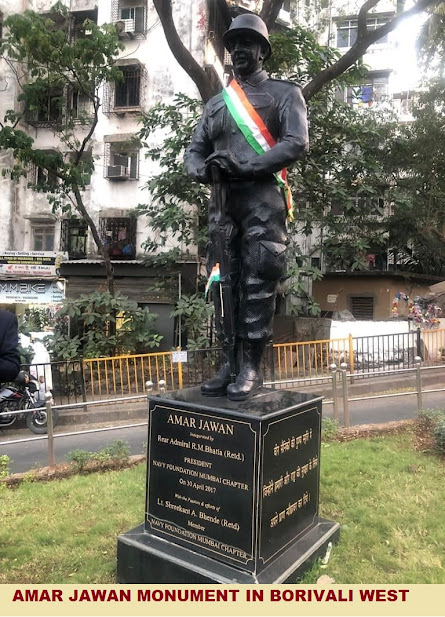 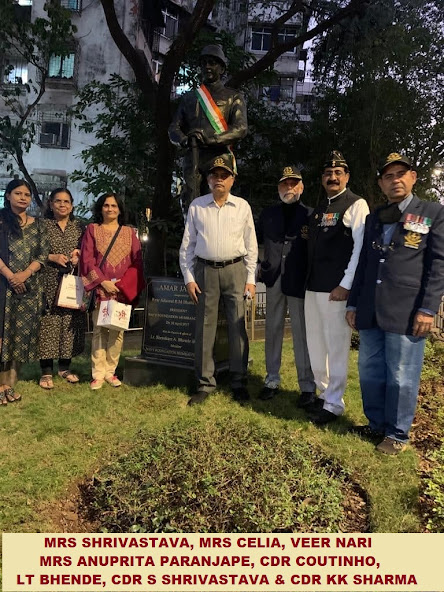 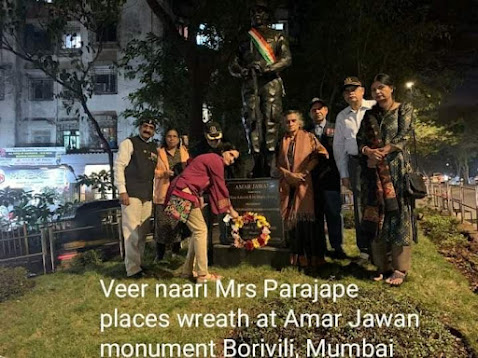 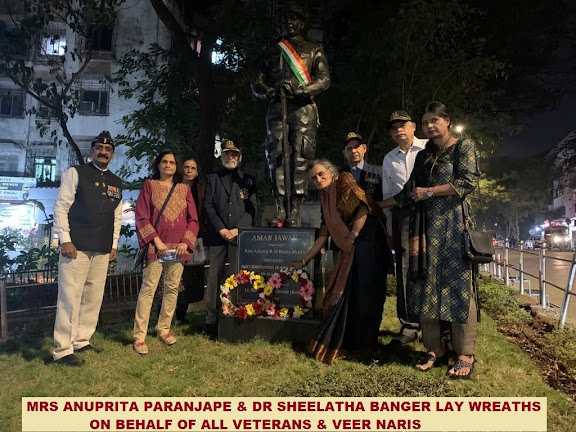 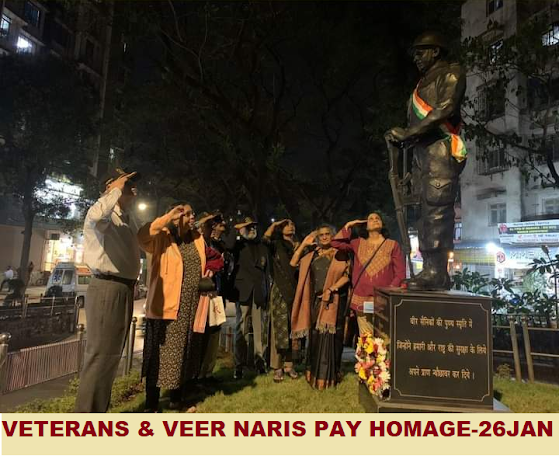 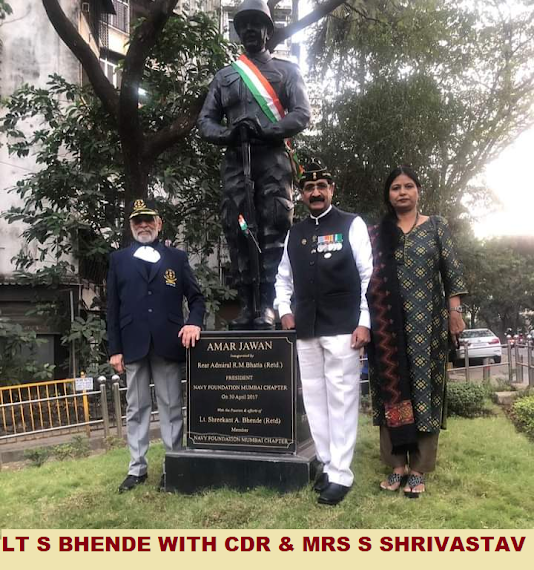