Honour to the soldier and sailor everywhere, who bravely bears his country’s cause. Honour also, to the citizen who cares for his brother in the field and serves, as he best can, the same cause…..Abraham Lincoln 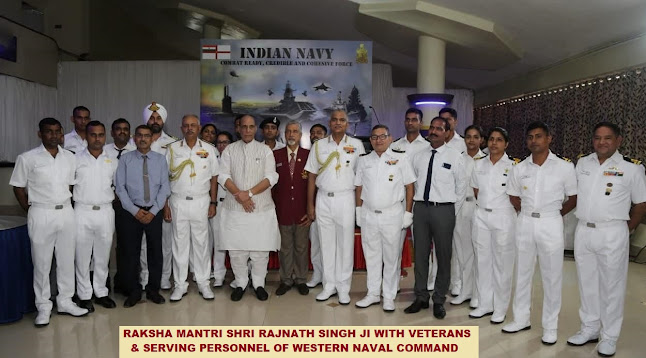 Seldom do Veterans get an Honoured opportunity to interact with a Cabinet Minister in a congenial circumambience. The humane fortuitousness was facilitated by HQWNC for the Naval Veterans of Mumbai, when the Defence Minister Shri Rajnath Singh visited the Financial Capital on 17th May for the Launch of two stealth ships 'Udaygiri' and 'Surat' at the Mazagaon Docks. After the Launch of the two ships the Minister was taken to Naval Uprising Memorial, Colaba to lay wreath and pay Homage. He then reviewed the Gallery of RIN Mutiny and was presented the Book “Naval Uprising – 1946” by our Commander in Chief VAdm AB Singh, PVSM, AVSM, VSM, ADC.

The CRSO, Capt Sunil Anand had requested NFMC and VSF for 20 and 30 Veterans respectively for Lunch interaction with RM at 1230 hr on 17 May at Sailors Institute ‘Sagar’. Due to restricted numbers and paucity of time Cdr Vadhera had nominated select Veterans and informed the CRSO. Elaborate arrangements had been made by OIC Sailors Institute. INS Kunjali had catered for adequate Parking arrangements opp Sagar. Cdr Vadhera was informed about him sharing the Head Table along with RM, CNS and CinC along with a VSF Veteran. Very thoughtful of the Command to provide opportunity to Veterans to freely interact with RM.

The ground-floor central Hall was well decorated with adequate seating arrangements for about 200 personnel. It was a pleasure indeed to meet some of my Veteran sailors from my ex ships and INS Valsura. Veteran Shashikant Mishra, MCERA who was among the Veterans in the First Veterans Day Parade, cheerfully met the Veteran Officers and snapped their group photo. Lt Ambika, the JA from Angre briefed all present about the schedule to be followed. The Veteran Officers who were fortunate to interact with Flag Officers and senior officers of WNC and later with RM were Cdr Vadhera, President NFMC, Cdr Nozar Engineer, Cmde Anand Singh, Cdr Abhishek Kankan, Cmde Odakkal Johnson, Surg Cmde(D) Arun Mehta, Cmde Prodip Mehra, Cdr Man Singh, Cdr Sanjay Karve, Cdr Shailendra Sharma, Cdr SK Jana, Cdr PVR Krishnan, LtCdr Rajeshwari Kori and Surg LtCdr AH Subudhi.

The Arrival of Chief Guest was indicated by the chiming  of the sonorous orchestra of the Naval Live Band from the First Floor of Sagar. Raksha Mantri was accompanied by CNS and CinC and interacted with serving personnel followed by Veterans. Cdr Vadhera stole the Golden opportunity to confidently brief the RM about the Veterans Day Parade being prided by Australia & NZ (ANZAC Day) on 25 Apr; USA And Allied nations (Remembrance Day) on 11 Nov every year and our very own First Veterans Day Parade on Marine Drive on 12 Jan 2020. He requested the RM to consider this event Pan India by all three services on Veterans Day annually. RM had been quite receptive and nodded his appreciation and said he’d speak to the Chiefs during the joint meeting. A very positive outcome of the Day that fills our Hearts with pride indeed. Hon Lt Upadhyay soon took to stage and welcomed the Raksha Mantri in a Josh Speech. RM spoke about the sacrifices of Jawans of all three services and said the Nation is undeniably proud of our Armed Forces. Do listen to his motivational speech (attached below).

The multicuisine delectable Lunch was exceptional on white tables, where we had an opportunity to interact with other sailors and Veterans. The Ras-malai and Kulfi were exquisite.

IN THE NEWS :   Hon'ble #RakshaMantri Shri Rajnath Singh launched two frontline warships of the Indian Navy, 'Surat' and 'Udaygiri at #MDL, Mumbai on 17 May 2022. 'Surat' is the fourth Guided Missile Destroyer of P15B class, while Udaygiri' is the second Stealth Frigate of P17A class launched in MDL. Both warships have been designed in-house by the Directorate of Naval Design (DND) and built at MDL, Mumbai. The RM in his address described the warships as an embodiment of Government's unwavering commitment to enhance the country's maritime capability, with focus on achieving #AatmaNirbharta. He congratulated MDL for continued ship production activities despite the pandemic and meeting the requirements of Indian Navy in current geo-political scenario. He emphasised that Udaygiri and Surat are shining examples of India's growing indigenous capability and will represent India's strategic strength to the world. The warships will be among the most technologically advanced missile platforms in the world and cater to the present as well as future requirements. He also said that in the times to come, India will not only fulfill it's own needs, but will also meet the shipbuilding requirements of the world in line with the Hon'ble #PrimeMinister Shri Narendra Modi's vision of #Makeinindia, Make for the World. #AatmaNirbharBharat #HarkaamDeshKeNaam #Indian Navy #ShipBuilding

accompanied by Adm R Hari Kumar #CNS, laid a wreath & paid homage at the Naval Uprising memorial at Colaba #Mumbai on 17 May 22.

The RM was also presented a book on the Naval Uprising in 1946 by VAdm Ajendra Bahadur Singh, CinC #WNC. 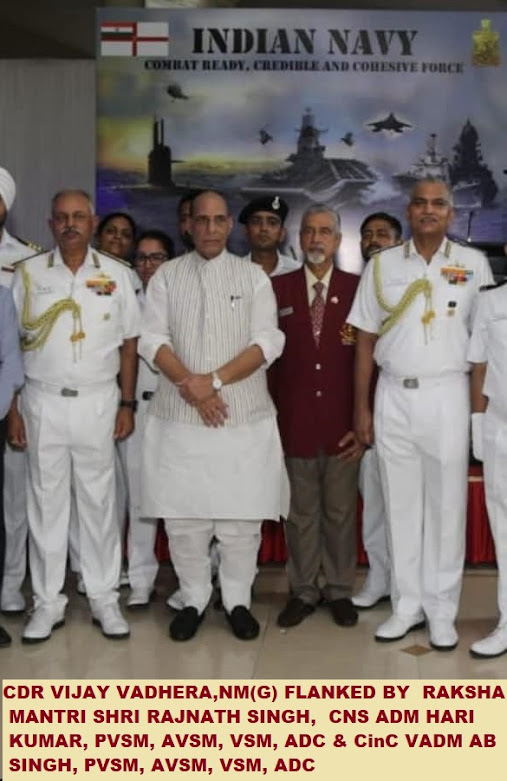 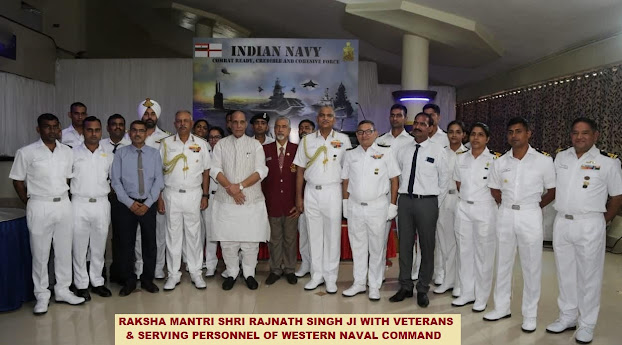 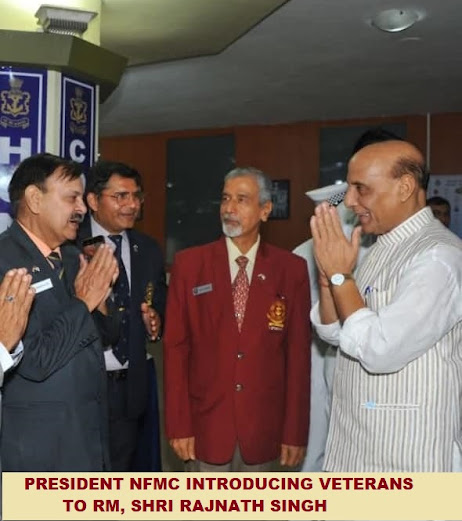 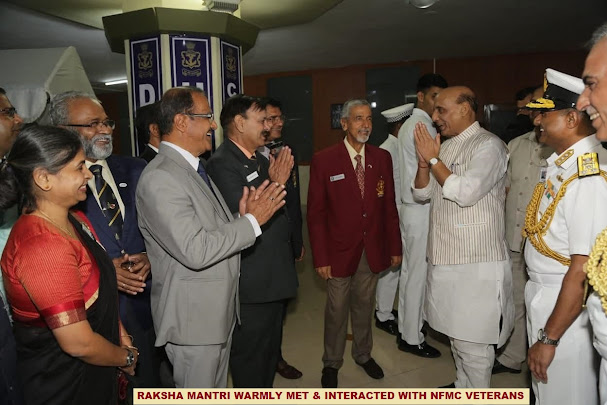 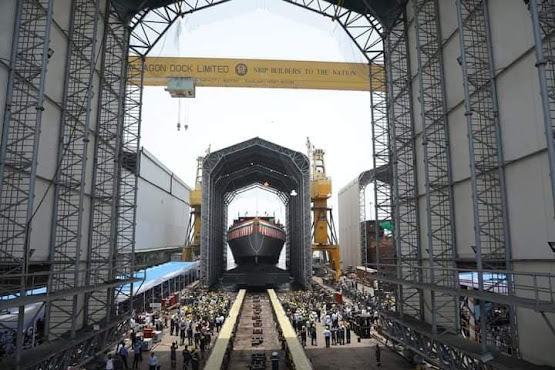 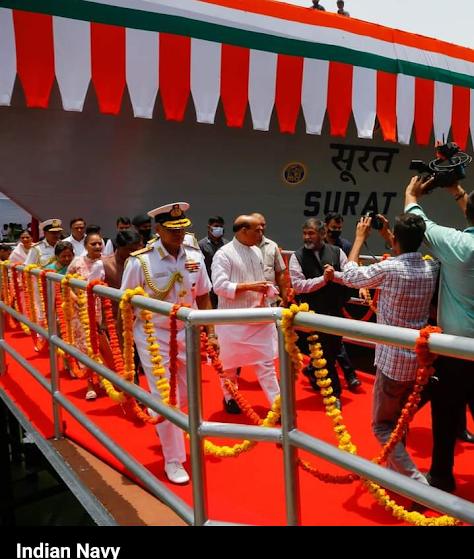 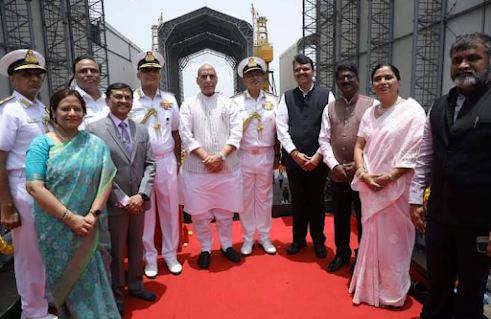 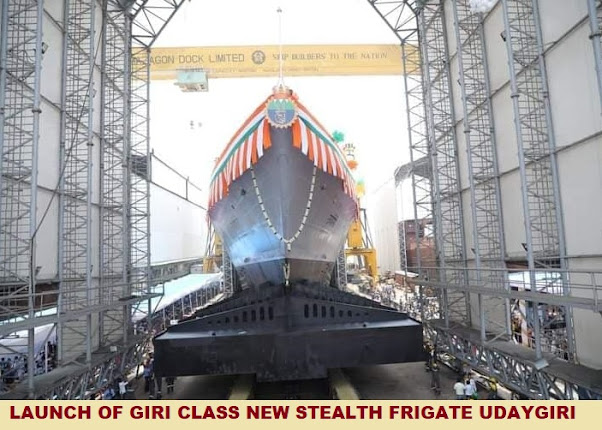 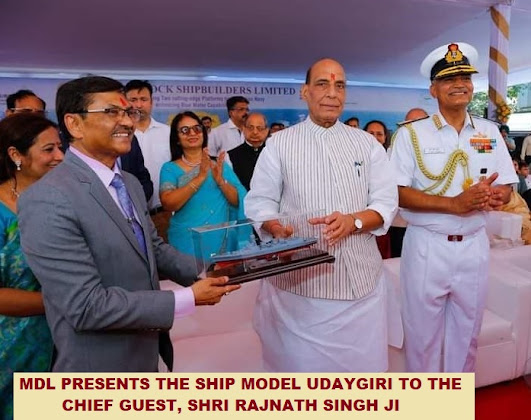 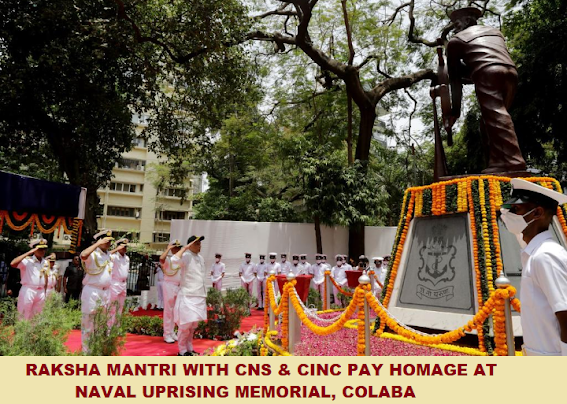 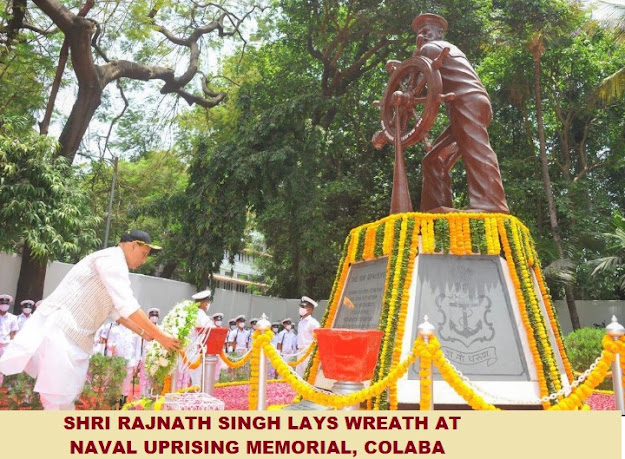 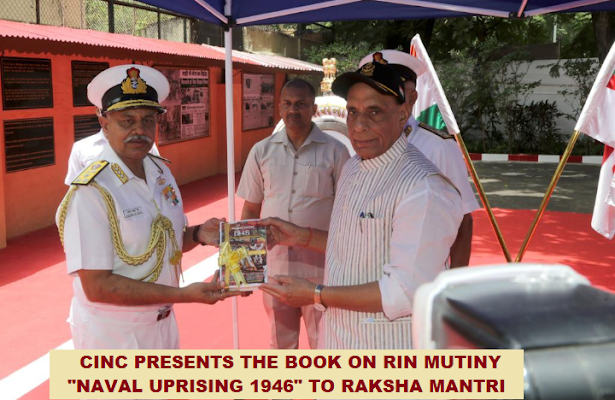 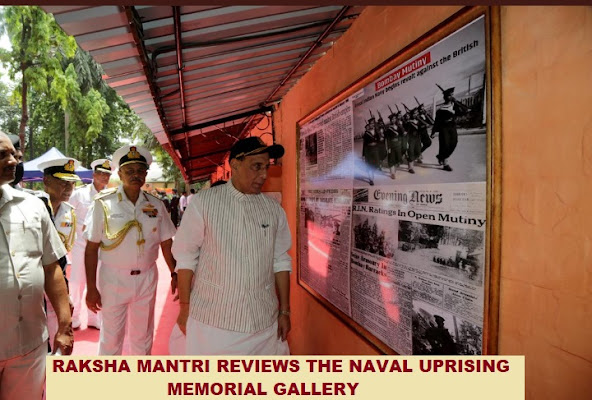 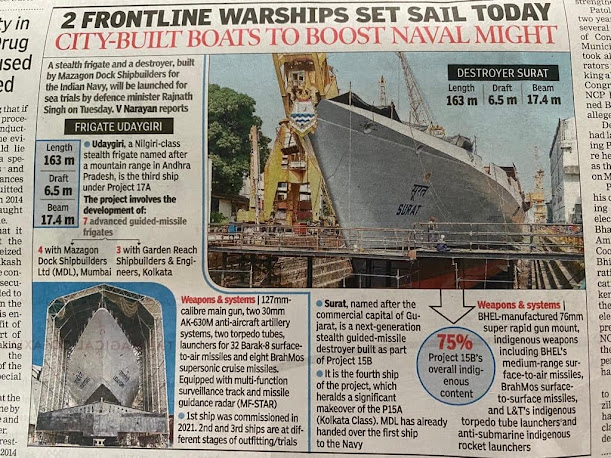