My dad had just been posted to AF  Halwara in late 60s and me admitted to KV std V. I was an innocent dumb kid with no friends in the new class. Another kid, more smarter than me , living in my neighbourhood befriended me. We started going to school together that was a Km and half away. Rajesh Dhir was his name. We started visiting each other’s home regularly. Our Dad’s and our Mom’s also became friends. Exchange of dishes started, as happens in some North Indian neighbourhoods. Creates a sense of bonhomie and you have more variety to relish…(remember the exchange of ideas, and each one having two ideas…. here the summation of dishes )…Soon there was  Independence Day celebration in School and Kids were asked to present their items, to be whetted by class teachers and then rehearsals…Rajesh and me decided to gather a few class mates for a group song…I, the dumo, was happy when our ‘Dresh ki Dharti’ was approved…The class teacher told some hoarse singers, including me, to do only lip singing with actions…On the D Day, we had been told to come in white shorts, the fact that either did’nt filter down to me or I missed out and I went to School in the usual blue short…I was in panic, of being left out of the chorus at the last moment…Spotting me in a morose mood Rajesh smiled, “Don’t worry I have brought a newly stitched nikar, for this particular song in my school bag”…He was wearing his usual white short…”I thought of changing into this before the item…Par tu pahan le yaar”…My joy new no bounds…

Our item, the Manoj Kumar song turned out to be the best group song of the function and we along with our class teacher went on stage to receive our gift of sweets/trophies from the Princi…

When I went to the change room I was in for a shock…That stupid of a fountain pen had leaked and deposited a large blue spot on the corner of the pocket (we had changed over from pencil to fountain pen in IV)…I changed, took the nikar to wash under the row of taps in the bathroom, but the spot spread and made it look worse…tears welled up in my eyes as I faced Rajesh with his spoiled Nikar in my hand behind my back…”What happened Rajinder? why you crying? Todays the best day of our Life…Everyone appreciated our song” and he started singing ‘Mere desh ki Dharti’ to bemuse me…stealthily I brought my hand in front to reveal his bicoloured brand new Nikar and observed his face through the drying tears…His smile broadened, “Abbe tu iske liye ro raha hai? Chhod yar”…He snatched it from me and returned it to his bag after a fold…My Mom got another short stitched for Rajesh, but his friendly nature made him my Best of friends even to this day…He is a Senior Manager of a company in Ludhiana…For Rajesh….
Dost Pyar se bhi bada hota hai.
Har Khusi or Gam me sath hota hai,
Tabhi toh KRISHNA, RADHA ke liye Nahi,
SUDAMA ke liye Rota hai..
Kyuki har 1 Friend Zaruri Hota hai

UNFORGETABLE SCHOOL BUDDY - II
================================
I had seen this movie, 'Haqeeqat, along with my good friend Rajesh during my childhood. After the success of their group song ‘Mere desh ki dharti’, in which Little Raj of fifth standard mostly performed lip singing, he slowly emboldened into a bathroom singer and was very fond of singing ‘Kar chale hum fida’ …….…In the inter-house singing competition he confidently and promptly enrolled his name for a solo song.
He practised well…come the D day…When his name was announced, he confidently went up the stage of the auditorium, amidst the 300 odd cheering and whistling students, even as the teachers were shouting “Quiet ! Quiet !!”…. The mike man came, adjusted the mike for him and slipped back…

The hall was in splits…the boy didn’t know where to look, even as tears welled up in his innocent eyes….
Just then he saw through his tears, Rajesh getting up from the third row and exiting the side door….Little Raj wished the stage to tear apart and the Earth to swallow him, as it did to ‘Sita’….
Just then he felt an arm on his back and shoulders. He looked and was relieved and overjoyed to see Rajesh, who started off the song…That initial line rung the bell and Raj immediately regained his confidence and both of them sang the song in unison… The students became quiet, and you could have heard a pin drop, when the song finished, just before the thunderous applause engulfed the auditorium….What a live example of friendship !


(A Mic today is Raj's close faithful Buddy, as he is a fairly good Anchor and commentator)
(In Pic Rajesh with his sisters) 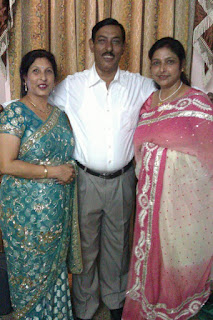