Baan Ganga, Mumbai
=================
It was a surprise revelation from our Son Anuj regarding the flow of Ganga in Mumbai. A Jai Hind college classmate of his, Amit Mishra stays in the Walkeshwar locality of Malabar hill where flows the Ganga into a Large reservoir surrounded with steps, around which are built 108 small temples. So after the Beating Retreat at the Gateway of India and the ‘At Home’ in C-in-C’s house on 04 Dec, we drove to the Malabar Hill and met up Amit, who not only escorted us to ‘Baan Ganga’ but narrated its history and mythological importance, as we sat on steps of its Ghats enjoying the refreshing cool breeze.
---------------------------------------------------------
The Tank was built in the 1127 AD, by Lakshman Prabhu, a minister in the court of Silhara dynasty kings of Thane. It was rebuilt in 1715 AD, out of a donation to the Walkeshwar Temple by Rama Kamath. The main temple has been reconstructed since then and is at present a reinforced concrete structure of recent construction.

According to local legend, it sprang forth when Lord Rama, the exiled hero of the epic Ramayana, stopped at the spot in search of his kidnapped wife Sita. As the legend goes, overcome with fatigue and thirst, Rama asked his brother Lakshmana to bring him some water. Laxman instantly shot an arrow into the ground, and water gushed forth from the ground, creating a tributary of the Ganges, which flows over a thousand miles away, hence its name, Banganga, the Ganga created by a Baan (arrow).

The Baanganga also houses the 'Shri Kashi Math' and 'Shri Kavale Math' of the Goud Saraswat Brahmins at its banks and samadhis of their various past heads of the Math. The area also has a Hindu cremation ground, which after 2003, received a makeover to house a gas crematorium. The area still has an old Hindu cemetery consisting of samadhi shrines of various Advaita gurus, such as Sri Siddarameshwar Maharaj (1888–1936) and his disciple, Sri Ranjit Maharaj (1913–2000).

The tank today is a rectangular pool structure surrounded by steps on all four sides. At the entrance are two pillars in which diyas (oil lamps) were lit in ancient times. The tank is spring fed and so its water remains sweet, despite being located only a few dozen meters away from the sea. Apart from being a cultural hub, the place over the years has provided inspiration to many artists, be it on film or on canvas.
---------------------------------------------------------
Meena, self, Anuj and Amit took a parikrama of ‘Baan Ganga,’ on the upper steps of which quack a large number of ducks throughout the day and night. We sat on the step enjoying the soothing breeze, even as a small black and white Cat came and sat quietly behind Meena.

It was an enriching experience and comforting too for our Souls. We thanked Amit, who is a humble lawyer who had recently earned his professional qualification for practising, bid him Goodbye and set course for ou Borivali home. 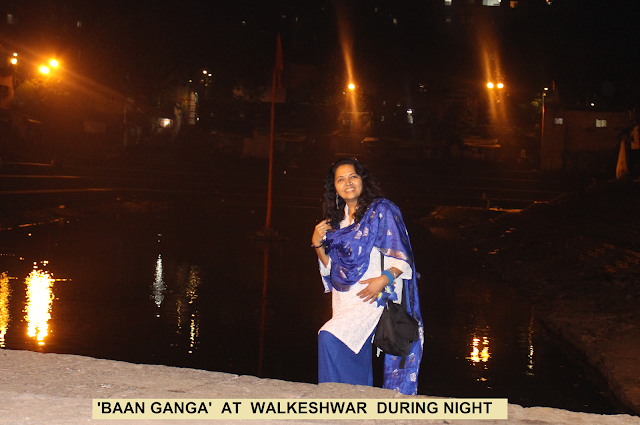 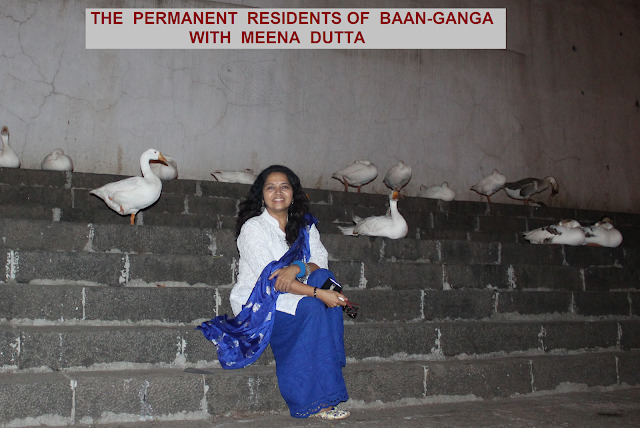 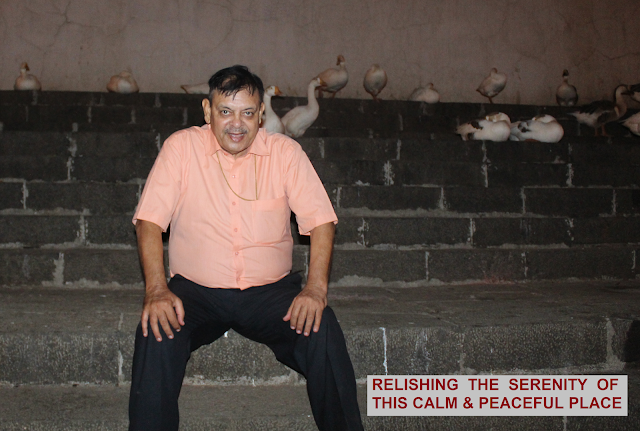 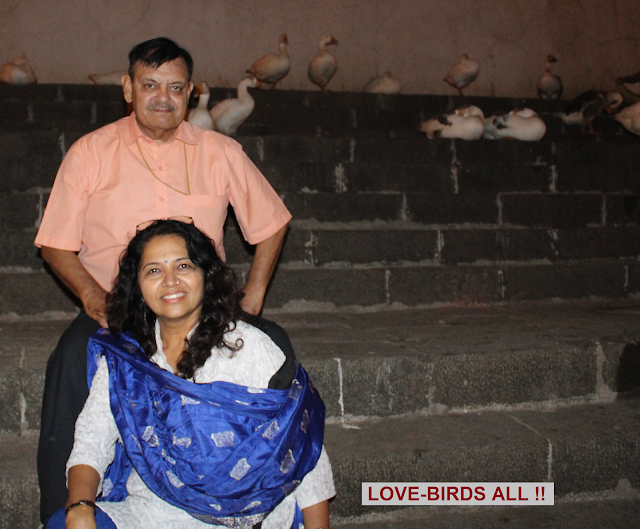 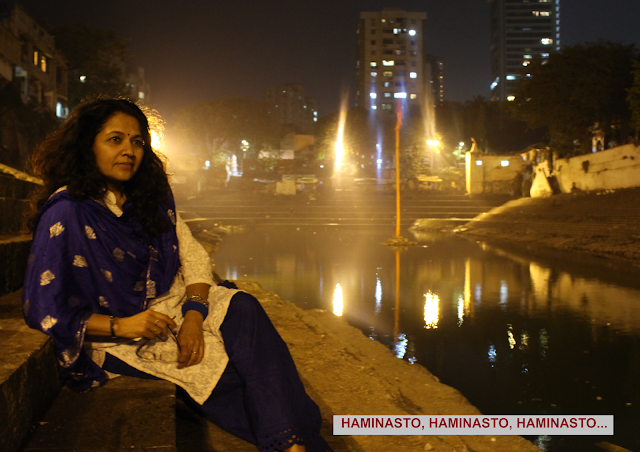 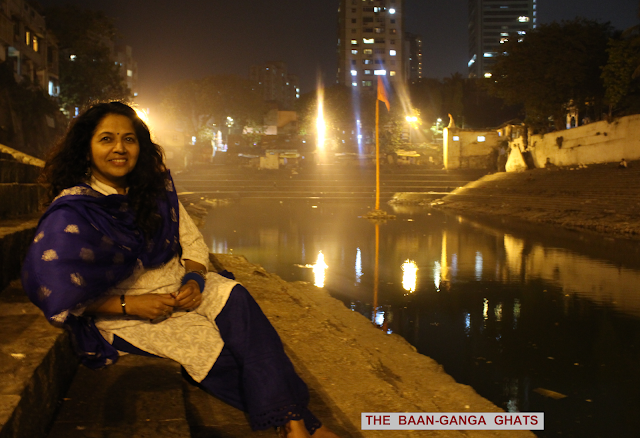 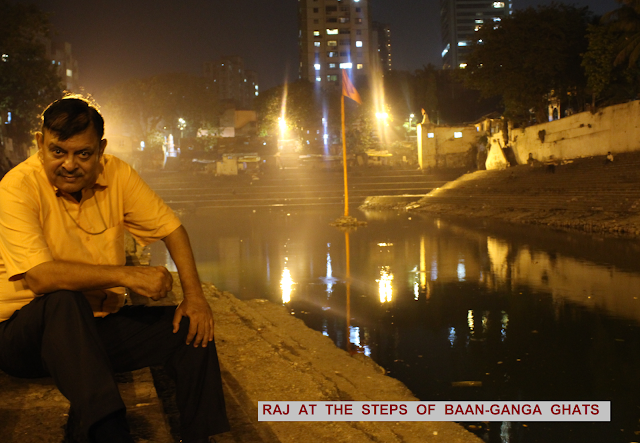 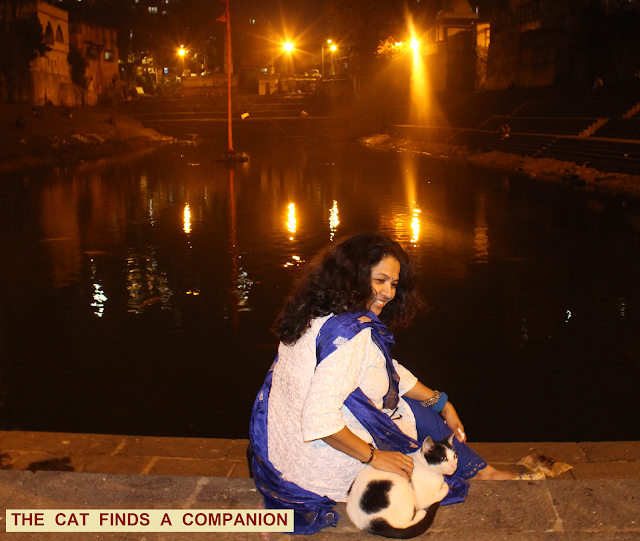 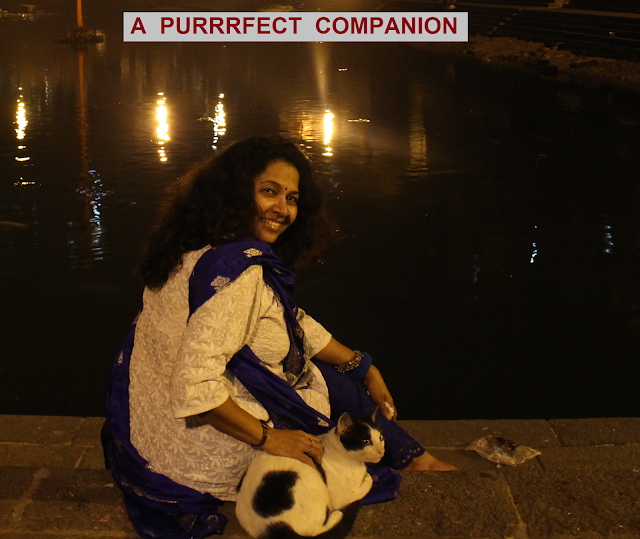