JAB  WE  MET
============
In the last week of past month, I was pleasantly enchanted to receive a call from my close smart buddy of KV Jamnagar, Bharat Shah. Bharat, who was our class leader of class IX and X. Bharat, who was a class apart. Bharat, who was endowed with a stupendous talent in Acting that could put some Bollywood actors to shame. Bharat, who was our Senior cadet of the Junior Division NCC troop, of which I was a part. Bharat, who was a live-wire of our School and created a void when he left us in X, when his parents got relocated to London along with their small family of 10 fine children; 3 daughters and 7 sons, of which Bharat is the youngest. I was bound to be as excited as a Kid, when he told me that he would be in Mumbai on 1st Feb, visit Shirdi for two days and be back on 4th for a couple of days, before flying down back to London. I rang him up on the 5th morning to check on his program and get a meeting fixed. An hour later I was driving down from Borivali to his hotel in Khar. I’d just wheeled my Manza on the Parking stilt when emerged Bharat from the lobby wearing a broad grin between his outstreched arms. He looked much brilliant than his school days frame. I inadvertently left the car door open as I walked towards him. We hugged each other after 44 long years. Having secured the car, we continued our exuberant chat as strolled out to explore the streets of Khar; unfamiliar to both of us. Glancing at a Restaurant, the epithet of which reminded us of another great classmate of ours, ‘Krishna Kumar Bhardwaj’….We entered ‘Krishna’ to bathe ourselves in the memories of the era we had left abaft long ago but yet did long for it.

During our two hour synergy in the hideaway we discussed our Sports days, NCC days (the naughty escapades, sans vulgarity, that we were privy to at the Baroda Annual Alembic Camp). Bharat was our NCC senior cadet of  Junior Div with a rich commanding voice. At the Baroda state level camp, he was the undisputed choice for the Best Mono-Acting Prize, while I’d bagged the Best All-around cadet title. Bharat would have become a Bollywood star or joined the Armed Forces, had his parents not shifted to London. He owns a Photo studio ‘May-Fair’ that’s a commercial success at the London street. His Son and Daughter have both excelled in the Economics field. He and his elder sister had come to visit India to meet friends and relatives.

We ordered and relished Masala Dosa apart from special sandwiches among two rounds of steaming Cuppa, in which we dipped ample memories of our nostalgic school days to draw out a rich fragrant aroma.  When her sister rang up, we popped out of our dream world after 2 hours. We re-tracked to his hotel and exchanged our surprise mementoes. There was an elegant Scarf of his favourite Blue colour for him, that I exchanged for a wonderful Tee Shirt together with the memories of our School Era that he had captured in an Album for me. Although we went along journeying nostalgia leafing through the Album, to my sheer delight he presented it to me sans any hesitation.  I dropped Bharat and his elder Sister to the Santa Cruz Mall, where they intended to shop prior to their London departure next morning. We parted with a tight hug, bid great wishes to each other as I set course back to Borivali. Bharat is one person, who like a whiff of fresh air, enters with a Cheer, and leaves pleasant footprints when he leaves….Long live Bharat. 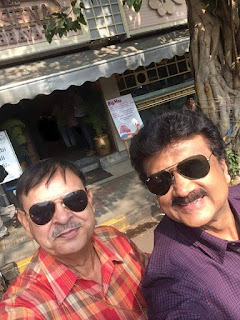 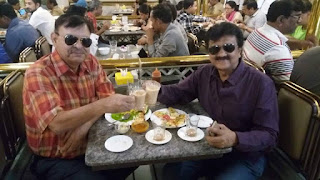