KALA GHODA FEST – 2019
======================
The 300 yds long straight road out of the Lion’s Gate of Naval Dockyard Mumbai, K Dubash Marg, is a fairly wide road leading to the former Air-India Building across MG Road right ahead and the Jehangir Art Gallery on the left end of this Road. The Road Junction at the end of Dubash Marg is a triangular Island on which stands a tall pedestal that adorns a riderless Black stallion that Christians the Junction, ‘Kala Ghoda’. The area around this monument has a large number of the city's heritage buildings and is full of museums, art galleries and educational institutions.like the Jehangir Art Gallery, the National Gallery of Modern Art, the Chhatrapati Shivaji Maharaj Vastu Sangrahalaya and The Arts Trust. The area is quite familiar to me as I used to commute to my office in Lions Gate diving through these roads for 5 yrs. It was my passion to train the cadets to join the Armed Forces, in my NCC Office. Coming to Dubash Marg... Each year, the area hosts the Kala Ghoda Arts Festival. The area is sandwiched between Mumbai Port's docklands to the east, Regal Cinema to the south, Fountain to the north and Oval Maidan to the west. The Bombay Stock Exchange is to its North East.

As per Wikipedia, The name Kala Ghoda derived from Black Horse, a reference to the presence of a black stone statue of King Edward VII (as the then Prince of Wales) mounted on a horse that was built by Jewish businessman and philanthropist Albert Abdullah David Sassoon, although this statue was removed from the precinct in 1965 and subsequently placed inside the Byculla Zoo. In 2017, the 'Kala Ghoda' returned to the area with a new statue of a similar looking horse without a rider, being commissioned by the Kala Ghoda Association. The statue, titled 'Spirit of Kala Ghoda' was designed by architect Alfaz Miller and sculpted by Shreehari Bhosle.

20 years ago, Kala Ghoda Association was formed with the idea of giving back to the city we call home - the thriving megapolis of Mumbai. And, thereafter was born the biggest street art festival that India has - the Kala Ghoda Arts Festival. Kala Ghoda Arts Festival is the country’s largest multicultural festival, taking place in early February every year. The Festival draws visitors in large numbers, not just from the city but from all over the country, and the world. Meena and I have been visiting this Fest year after year since our pre-retirement transfer to this Financial capital of our country. It's always a sheer joy to get oneself snapped against the artefacts crafted and displayed by the amazing artists of India. This year the Fest has started from 02 Feb and shall culminate on Sun 10 Feb.

Enjoy glancing over the snaps that we clicked past Sunday, 03 Feb at the Fest. 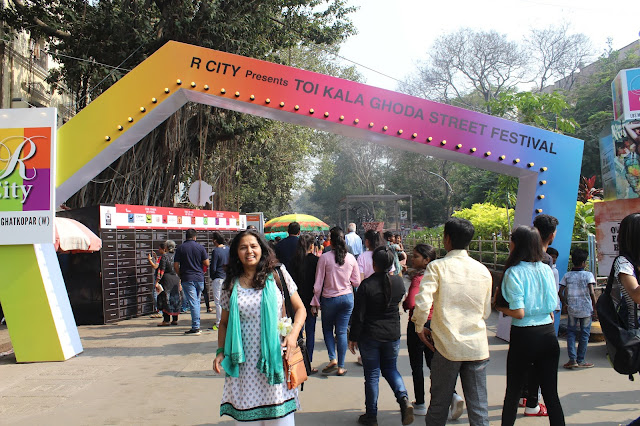 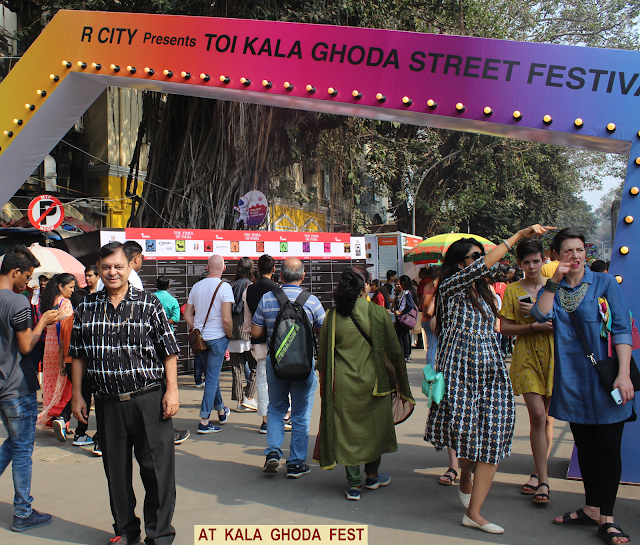 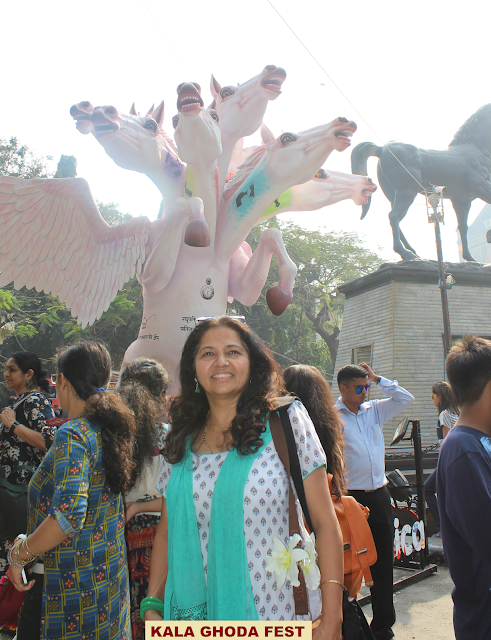 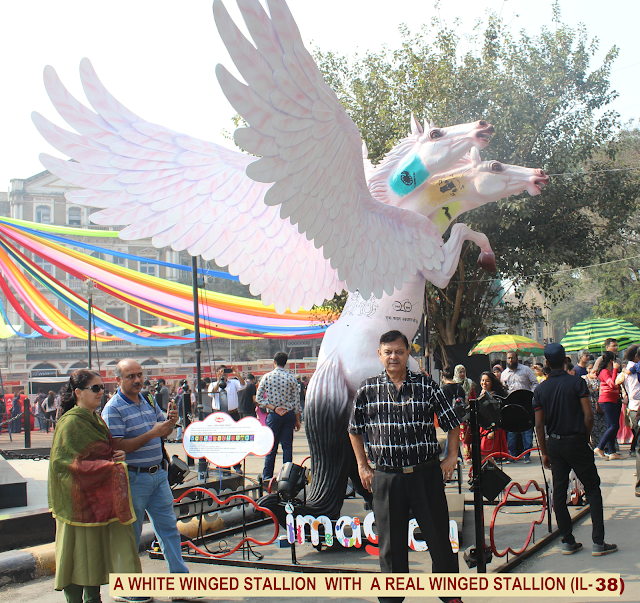 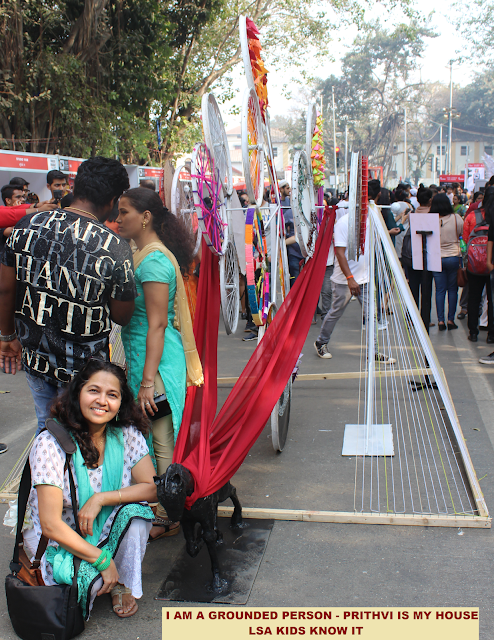 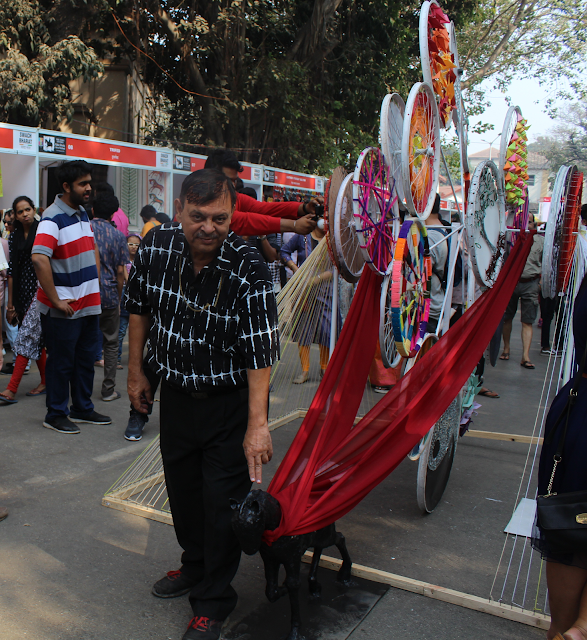 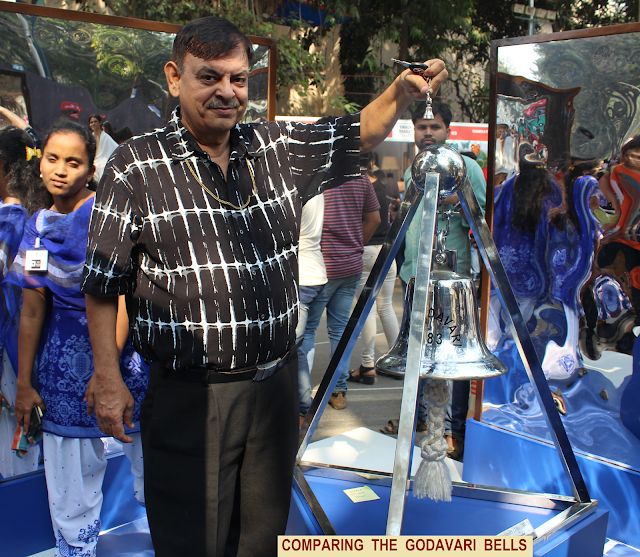 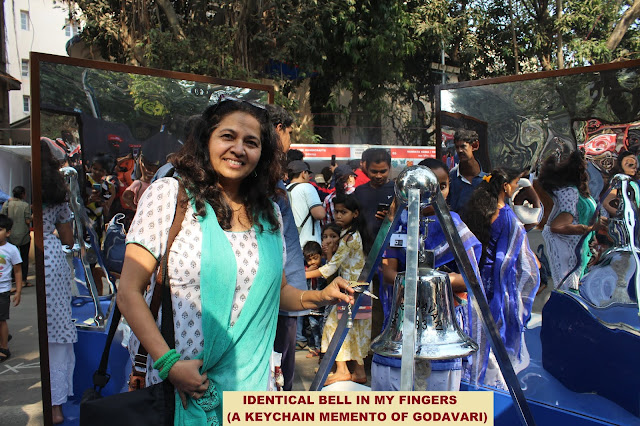 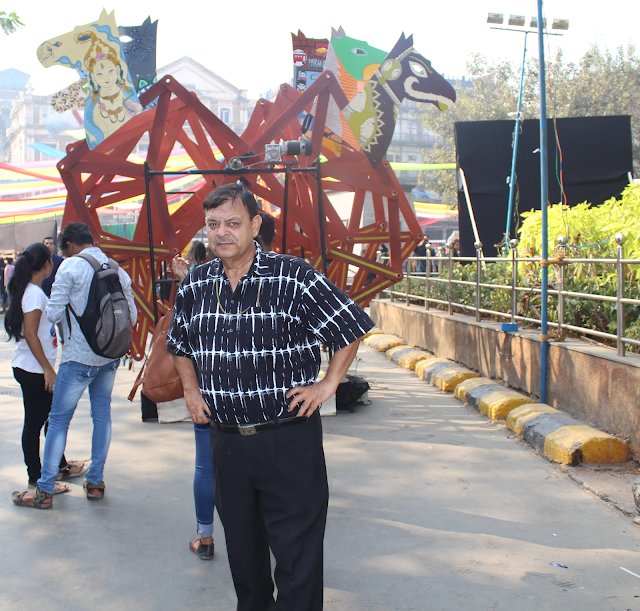 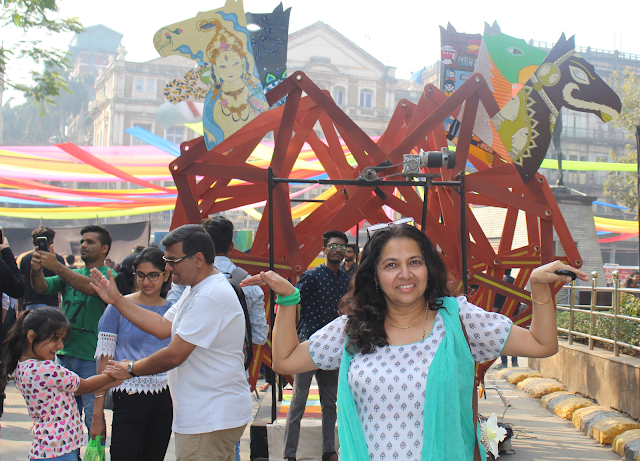 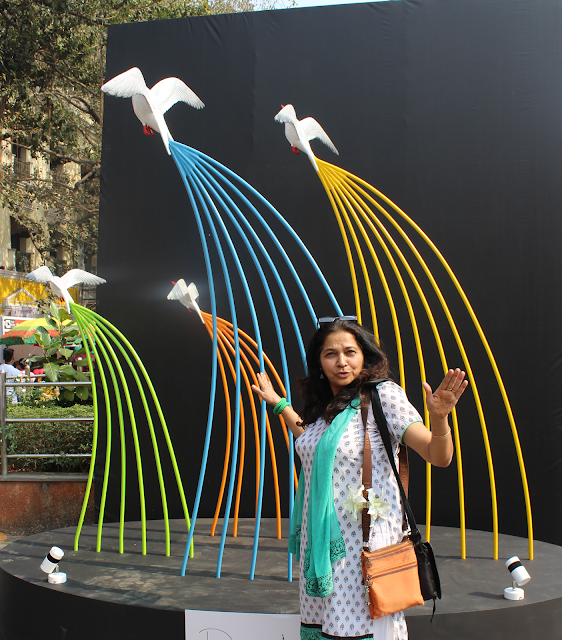 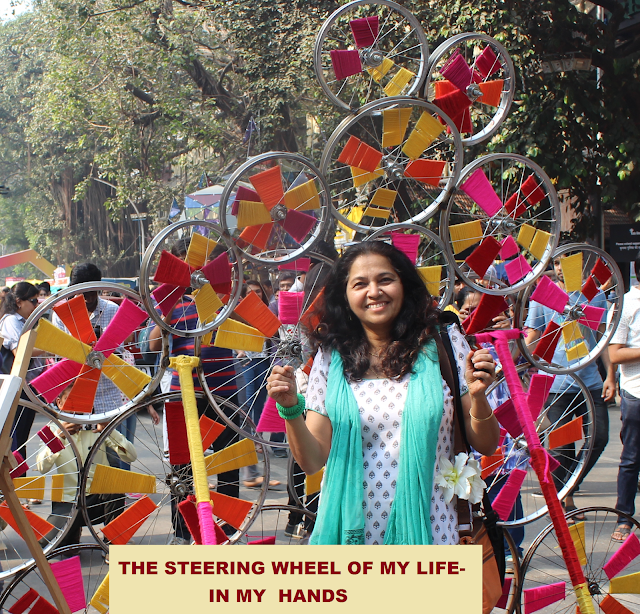 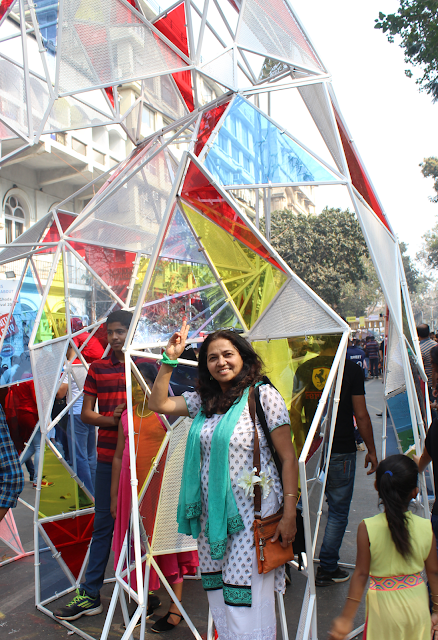 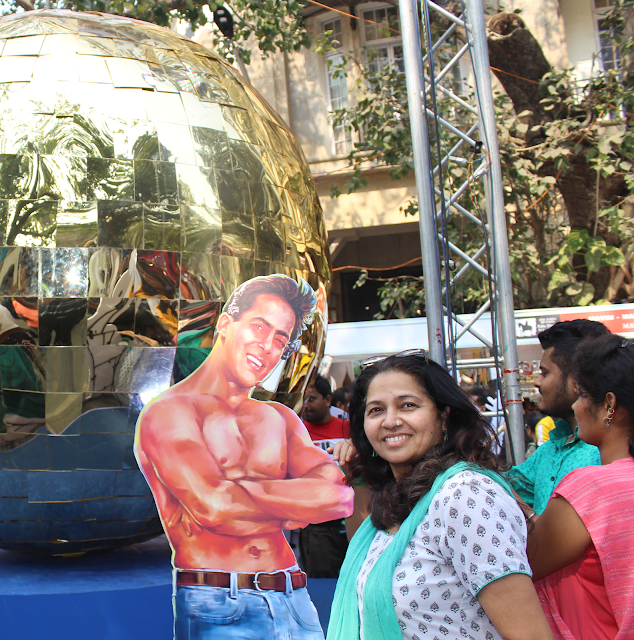 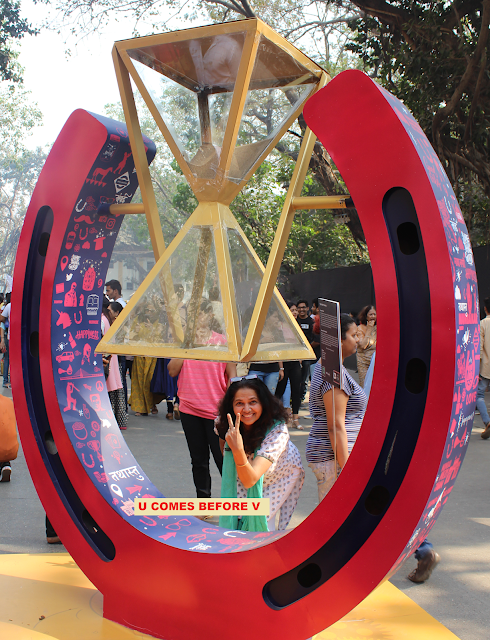 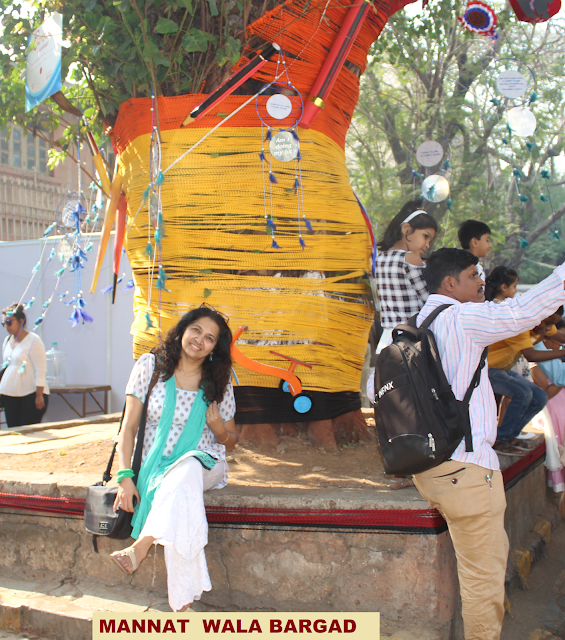 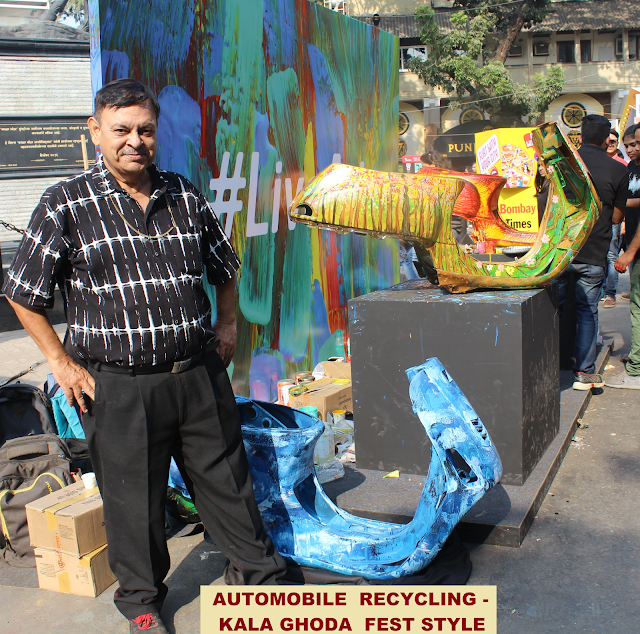 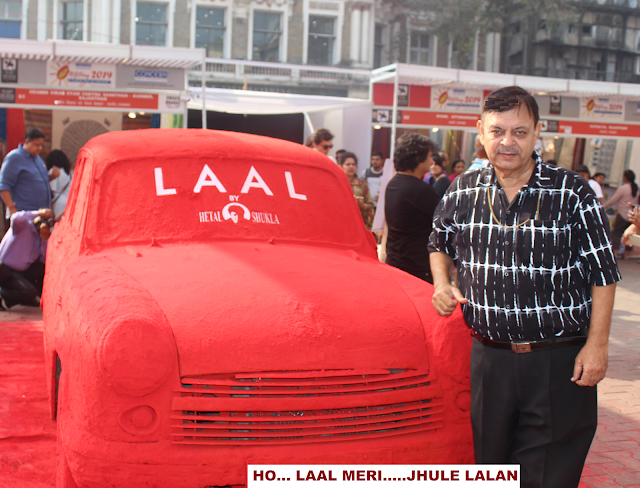 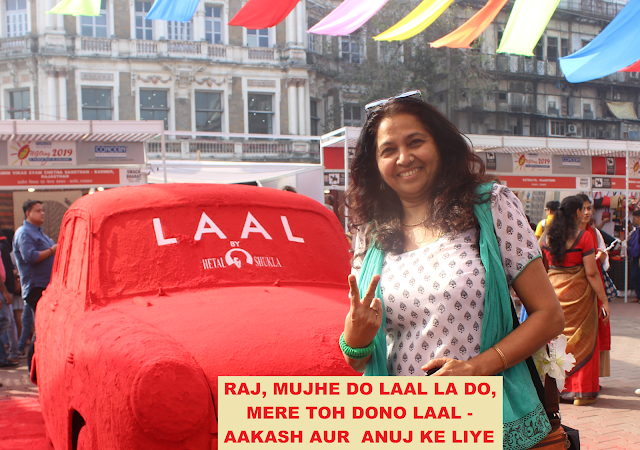 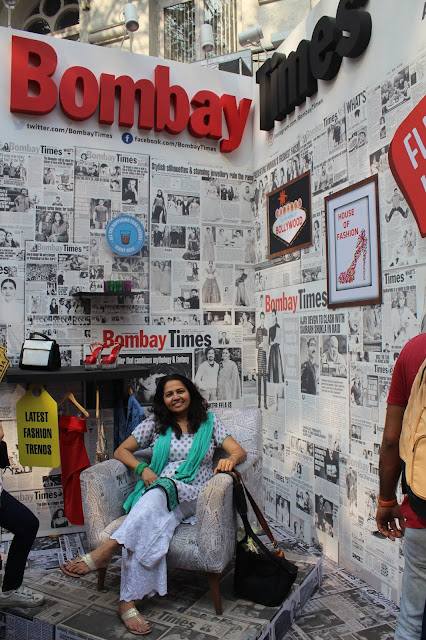 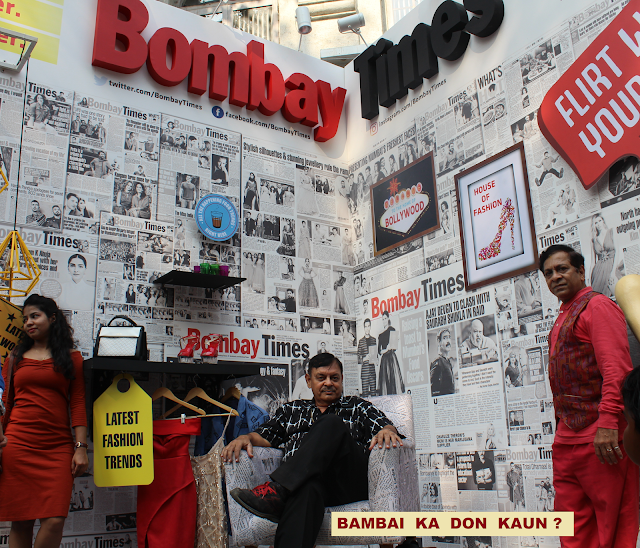