I have had the privilege of first interacting with RAdm NN Anand, when I and Meena visited his Matunga home in May 2019, to present him the Octogenarian Memento. The Adm mentioned about him joining the 8th NDA course in 1952 as a cadet from New Delhi, his specialisation in Commn, his three Ship’s commands including Himgiri and Vindhyagiri, Operation  Python of 1971 War, the formidability of the lone ranger - the Submarine and his tenure in the NDA in the mid 80s as DepCom.

NAVAL CAREER HIGHLIGHT OF RADM NN ANAND:  Best All Round Cadet on INS TIR Specialisation in Communications at HMS Mercury in the UK, Standing First with a Record Percentage of 94.3%, He was Flag Lt to First FOB (Flag Officer Bombay)  later designated FOCinC West. First in NATO and New Commonwealth Course,(which was commended by the CNS),Tenures on board Cauvery, Squadron SCO on Rajput (D 11), SCO Mysore, Instructor Signal School, Cochin. Command of INS Cauvery immediately after the 1971 War, Command Operations and Plans Officer Eastern Naval Command followed by Command of Himgiri,  First, Director Project SKY LARK, who was charged with the Responsibility of establishing the VLF Facility of the Indian Navy, thorough In depth Analysis of the Requirements, Introduction of Project Management Concept in Indian Navy/Armed Forces. ACNS(Policy & Plans) and identifying a Perspective Plan for the Service, Project Director SSK Project concurrently with ACNS(Policy & Plans) & FODAG. An alumnus of the Industrial  College of Armed Forces USA (through  correspondence on National Security Management, Alumnus of the National Defence College, Advisor to the Nigerian Navy at Lagos Nigeria, , Director of Naval Training at NHQ after the NDC followed by Command of Vindhyagiri, Commodore Naval Barracks at INS Angre, before moving to NHQ on Promotion as ACNS (P&P).In the Sports Domain, I.N. Squash Champion in 1960, Participated in Inter Services and National Squash Championships n 1960's, Portsmouth Command in U.K. during my Long 'C' Course  and Cricket at Command Level in  I.N..

The Adm consolidated reforms of NDA improving on the services training teams and making good the full complement of Sailboats for Navy and Gliders for the Air Force. He mentioned of the two categories of the cadets, the ‘Sophisticated Urban’ and the ‘Rustic Rural’ who are poles apart in the first term, transform into one flock by 4th term. I have interacted with a few of his cadets and they have fond memories of the Admiral and remember him dearly.

A lot has been said about Operation Trident that wreaked havoc on the enemy shores. Here’s the First-hand account of Operation Python by RAdm NN Anand, who as ExO Trishul was a Part of the Force to inflict further devastating damage to the Enemy in his own port (Ghar mein ghus ke, as they say😄). 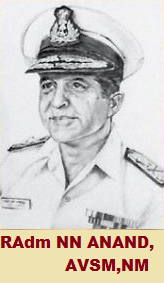 Has anyone ever heard of a Seaborne Attack on an Enemy Harbour with a large number of Warships at Anchorage and facilities shore barely a few hundred yards away?  Could this create Awe, or inspire Emotions of Incredible reality.

Such a situation actually occurred on the Night of 8/9 Dec 1971,during the Indo -Pakistan War of 1971,   Code Named PYTHON, under the Leadership of Captain (F) 15,on board Trishul  with Talwar and a Single Missile Boat Vinash, It was a Suicidal Mission , most clinically executed operation ever undertaken by units of the Western Fleet of the Indian Navy, which destroyed/ damaged Ships at anchorage in Karachi Harbour and set ablaze the Kemari Oil installation, whose Fire could be seen up to 80 - 90 nautical miles by the receding Task Group charged with that Mission.

Admiral Nanda, the then Chief of the Naval Staff, was very clear in his mind that the Humiliation suffered by the Indian Navy due the Bombardment of Dwarka by the Pakistan Navy in 1965,  by dropping a few shells on the Shore had caused unimaginable damage to the prestige of the Indian Navy, He was therefore clear in his mind that in any Future Conflict with Pakistan, the Indian Navy would physically go to their Main operating Base at Karachi and Destroy their Naval Units and Shore Installation. Any enemy Units encountered enroute would also be accordingly dealt with.

After Operation Trident, which took place on the night of 4th/5th Dec 1971, the Indian Navy first tasted Blood by destroying Pakistani Naval units some 50 Nautical miles away from Karachi. Emboldened by this success, Operation Python was then ordered to be Executed on the night of 5th/6th Dec, but later postponed to 8th/9th Dec '71, in which 3  units of the Western Fleet participated. The Pakistan Navy was fully alive to the occurance of such a development  and had accordingly planned all countermeasures to take on this challenge.

It must be appreciated that an Encounter at Sea is an evenly matched operation. But to go to an Enemy Harbour and launch an attack, is a different cattle of Fish. The Early warning of the approaching Hostile Force, the retaliatory action by the enemy Air Force, the Engagement by Shore Defence units and other surface / Sub surface units was a distinct possibility!

The Operation Orders issued by Trishul (Task Force Commander ) had therefore clearly indicated that in the event of any Damage incurred by any unit of the Advancing Force, ' NO Survivors would be picked up 'In planning the Execution of this Operation, emphasis was laid on a Stealth approach, Maximum Electronic Security, and a Close knit Compact Formation which was not Susceptible to Clear Composition of the Task Group Electronically.

The Task Group was closed up at Action Stations from 1730 hours, Ships formed up in their Battle Formation, Communication Security Policy ONE in force, and heading Towards Karachi at 25 Knots, with the objective of launching an Attack on Karachi at Midnight and engaging any Hostile Element Encountered enroute. Only One X band Radar was to be operated by a Single Unit of the Task Force in rotation and Plots updated accordingly. The Range advantage of Detection by X band of Vinash fully Exploited for Effective Offensive Tactics.

Couple of Developments  during the Approach Phase, which include compromising the Position of the Approaching Task Group by Pakistani Dhows stationed at a Perimeter of 150 miles from Karachi, The ESM detection of its Transmissions by Trishul, its destruction by Units of the Task Force, The Detection of the Task Force by Enemy Shore Radar when 60 Nautical miles from Karachi and remain Steady on it, in an attempt to determine its Composition and later attacking it when just outside its Range in close Proximity of Karachi Harbour, the occurrence of Defect in Vinash's X band Radar during the Crucial stage of Approach, its Rectification at the Critical moment of Attack, and the Speed Limitation of Vinash to 5 Knots,  due to its Filters getting Choked, on completion of the Missile attack, the Sighting of the FIRE flames at Karachi upto 80 to 90 Nautical Miles, the Capturing of TWO Merchant Ships during the Retreating Phase  etc etc were some of the actual nerve racking Experiences. faced by the Task Group Commander on board Trishul.

The Successful completion of Operation PYTHON was Reported to both FOCINC WEST , NHQ(I) And FOCWEF two hours later during the Retreating Phase breaking Radio Silence for TWO minutes with No elaboration of the damage caused to the Enemy deliberately ,as an intercept of a Long  Transmission would Compromise the position of the Task Group and assist the Enemy to Launch an Air Strike.

Within FIVE minutes of the clearance of the message indicating the Successful Execution of Operation PYTHON, Naval Headquarters Replied by stating 'BRAVO ZULU  THE NATION IS PROUD OF YOU'

The Indian Navy had thus established its Supremacy on its Western Sea Board and retrieved its Lost Prestige of 1965,  With the Oil Installation at Karachi, having been badly destroyed, Foreign countries were now requesting Naval Headquarters - India to Grant them a GRACE period of 48 hours so that their ships which were tied up in Karachi Harbour could leave Safely and get out of Harm's way

There were many lessons Learnt, Many Deficiencies highlighted in Fleet Operations, Full Exploitation of the Capabilities of each unit of the Task Group, etc  which, hopefully be undertaken for Analysis  by the authorities.

PS: Link to the interaction with Adm Anand 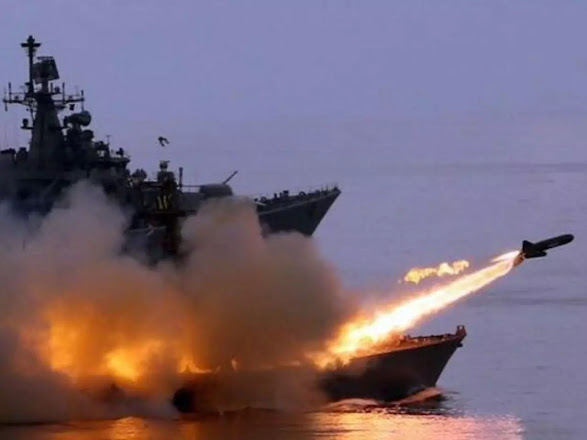