The genesis of INS Rajali lies in the think-tanks of Navy acquiring the maritime aircraft in mid seventies, the Super-connie from IAF and the IL-38 from Russia and later the TU-142Ms in 1988, all of which had INS Hansa, Goa  as their home base apart from the Alizes, Kirans, Harriers and Kamovs. Although the connies had phased out in 1984, Hansa was getting saturated with fresh induction of TUs and a need was felt for a separate Airbase for the TUs. Extensive studies resulted in homing on to Arakkonam near Chennai which had an abandoned airfield of British times.  The airfield was abandoned after the WW-II and lay unused until the 1980s, when it was transferred to the Indian Navy who rehabilitated and commissioned the airfield as INS Rajali on 11 March 1992. Even as INS Rajali celebrates its Silver Jubilee this year with fresh inductions the Poseidon P*8I, I ‘am reminded of my association with the First  maritime Aicraft of Indian Navy.
The Navy’s first long range Maritime Reconnaissance squadron was commissioned with five ex IAF Super Constellation aircraft on 08 Nov 76 at INS Hansa, Goa. Cdr RD Dhir was the commissioning Squadron Commander. I and my course mate Gopa Kumar had  flown the resilient Super-connie for 2 yrs in early 80s at INS Hansa Goa, the largest Naval Air Base of Asia prior to Arakkonam. Resilient, I mention, because in its sunset days with the Navy at Goa, the aircraft although seemed to display fatigue with malfunction of Hydraulics and misfiring of spark plugs, but always brought its crew back safely, after having tested their emergency actions…The aircraft gave some harrowing times to the poor Flight Engineer (FE) stationed behind the copilot, keeping an eye on the 72 sparkplugs of the 4 piston engines, on a scope that resembled an ECG monitor in an ICU..Either you could see the FE busy feathering one of the four engines, due to shorting of a sparkplug or pumping away the emergency hydraulic pump to get the undercarriage down, after an inadvertent drop of Hydraulic pressure due to a small leak somewhere on the old pipelines….DP Ashtekar, R Jayraman, MP Verma and Deen are some names that I recall, who ensured their good rapport with the spluttering engines coughing often nearing the fag end of their lives…. We were known as the mighty albatrosses. A crew room of the mighty albatrosses was a fun room with crew engaged in scrabble, chess and the never ending tea flowing in…Our  eversmiling  Snr ‘O’, Lt Cdr Rajesh Sharma  was  an instant  wit, who  heralded  the era  of  stand in  comedy…He once  stopped  Lt  Arya  in  the  sqn  corridor and  asked  him, “ Tu  Aa  riya  hai, ke Ja riya  hai ?” (Are you coming or going). Our  Snr Flt Engrr, Lt Jayaraman  had a quick fix solution for every thing under the Sun. Our Snr ‘P’ Lt Cdr Theo, later Cmde, was mostly engrossed in virtual world with his daily changing Novel in the briefing room, before the computers invaded the world and  made us realize that there is a real world around us. Lt Rakesh Saxena with his baby face did make the crew room buoyant with his mere entry.  Our Sqn Cdr, Cdr Macaden, was a very soft spoken Officer, who owned a vintage car, but he was mostly seen under his car than inside it as it invariably broke down at the road approaching the wardroom area and  we  saw him trying out a spanner under it. Our request for pushing it was politely declined with a complementary smile. He was a humble man leading a rowdy pack. If ever there was Life in the Navy, Haminasto-Haminasto-Haminasto (it was here, it was here, it was here).

This was the same aircraft that was the pride of Air-India in the ’50s, before being handed over to the IAF. My Dad was a Sargeant  technician of Super connie aircraft  in 6 Sqn Poona, where I started my initial primary schooling...we stayed in 10-20 area and then Viman Nagar...Our school bus used to take us across the runway, which used to close for canberra & vampires taking off in the morning...we really used to enjoy from our bus windows, the fighters taking off....in the evenings we used to venture into the abandoned liberator aircraft and sit in the cockpit and act out pilot/ copilot, do dummy flying, ...childhood was fun.....the 6 sqn 'Pagal Gim khana' anniv used to be fun and we were allowed to go into the connie earmarked for the visit from the rear , walk up the aisle and exit the front door...the cockpit cordoned off by ropes...when I and my younger brother walked up and reached the cockpit, I asked the Warrant officer  guide, for sitting in the pilot’s seat ...he politely refused...this was in 1966, me 8 yrs then...irony of fate ,...fast fwd 15 yrs later 1981, I was transferred from INAS- 550 Cochin to 312 Sqn to fly the connies at INS Hansa,Goa as an AgSlt, along with Gopa Kumar...My Dad must have been in seventh heaven, on hearing that  I was to fly the same  aircraft that he served in…

My perfect  Naval  Salute  to the  original Albatross  of the Naval  Aviation , the mighty  Super-Constellation. These  aircraft  herlded  the  era of the  mighty  Tuplov  T-142 M and of later  the  Poseidon  P*8I both based at Arakkonam near Chennai … 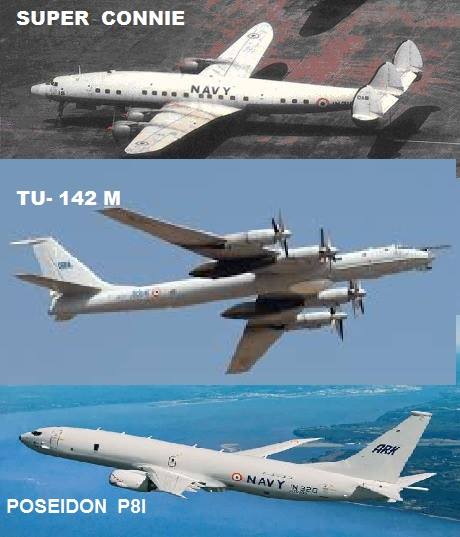