23RD MAR 2019
==============
(Imagine to be a part of a charged up evening that honours the Martyrs and felicitates their families and then getting regaled in the crescendos of Music dedicated to Sant Kabir….The result  is bound to be Euphoria at its Best.)

Early this month I chanced upon a Post by our dear Friend LtCdr Rajeshwari Kori regarding the Martyr’s being honoured and presented the ‘Shaheed-e-Hind’ Awards by the Indian Ex-Defence Service Employees Chamber of Commerce and Industry (IESECCI) on 23rd Mar 2019. She also mentioned that they would be honouring select Gallantry Awardees with ‘Inspiring Indian’ Awards which shall be followed by a scintillating performance by India’s Rock Band ‘Kabir Café’.

An enterprising Naval Officer Cdr Angsuman Ojha (R.O. INS Angre) after retiring in 2014 joined High Court Mumbai and AFT as an Advocate. It's heartening to know that he set up an NGO,  IESECCI for the welfare of the families of Ex-Defence employees. In his own words, the essence of all activities of this organisation is to match the considerable experience, expertise and work ethics of our retired service personnel to the requirements of the Public/ Private industry. The organisation bridges the gap between ex-Defence personnel and business for an enriching mutual role. IESECCI guides - the individuals' aspirations to the correct industry or vertical matched with relevant skills and certifications. The Chamber's consultants sort through talent to match most suitable candidates for specific tasks and requirements, for right placements, ensuring minimum load to the HR team. The Core Team of the IESECCI comprises:
Cdr Ansuman Ojha, Cdr Pravin Chauhan, Cdr Inderjit Pakrasi, Cdr Abhishek Kankan and Mr Ashutosh Narendranath.

The IESECCI has a commitment to society as a charitable organisation. The chamber is dedicated to bringing support for Ex-Servicemen as well as social issues in the society at large. To this end, it undertakes events and programmes. The following are a few indicative events:-

--Shaheed -E- Hind. Annual felicitation of the martyrs in a function where the public, for whom they laid their lives, can participate.
--Disability day Rally. Highlights equal opportunity and empowerment of the physically challenged.
-- Community-based events allowing new talents to emerge in sports not considered mainstream by today’s youth.

This year the Organisation held the second edition of the ‘Shaeed-E-Hind’ event on 23rd Mar, the Martyrdom Day of our beloved freedom fighters Shaheed Bhagat Singh, Rajguru and Sukhdev. It was decided to honour the Next of Kin of 4 Army Martyrs and 4 Police Martyrs belonging to Maharashtra. Besides the presentation of ‘Inspiring India’ awards to the Gallantry awardees from our three services and prominent civil personalities who have been dedicating their lives to our Nation.

The core team put their heads together to identify the neglected Martyrs families from the hinterland of our state and personally invited them to the Rangsharda Auditorium of Bandra to honour them. The team worked overtime to Plan and Organise the Event. A Video film was shot for each Martyr for projection during their Awards Ceremony.

LtCdr Rajeshwari Kori, (who is a Deputy Controller of Home Guards in-charge of Civil Defence Organisation of Maharashtra, having specialised from Germany), volunteered to invite and interact with the Next of Kin of Martyrs and look after them. Cdr Angsuman Ojha interacted with the Sponsors to make this event possible. He interacted with me on Rajeshwari’s request to include Veer Nari Urmila Bakshi, (Late LtCdr VP Bakshi, NM (Gal) for the “Inspiring India’ Award.

When we reached the Rang-Sharda Auditorium LtCdr Rajeshwari Kori warmly greeted us with a smile as I introduced her to Mrs Urmila Bakshi and Meena. We also met other invitees for the Inspiring 'Indian Award' : Cdr Anoop Verma, VrC, and a dynamic personality Knight Mehernosh Shroff,*(C.E.O. at Seaworthy Shipping Services and CEO/Founder/Owner at Shroff Aviation Industries). As we entered the hall we met Cdr Ravi Chauhan and his good lady Veena, our old friends since the Kolkata days. The Chief Guest for the Event was Brig Vinod Adappa, SM(Gal) and Guest of Honour was Padma Shree Dr Sharad Kale. The Anchor for the Event with the most mesmerising Voice was the National Commentator of RD Parades, LtCol MK Sinha. It was an honour to meet, greet and interact with them and the Next of Kins of the Martyrs. The Rang Sharda Auditorium was house-full. It was heartening to see Ex Cadet Sachin Khedekar, Area in-charge Civil Defence had mustered up a large number of students from Chetna College and NCC Cadets in uniform to witness the Event. Brig Vinod Adappa and Dr Sharad Kale presented the Awards to the Kins of Martyrs and the Inspiring Indians after which Brig Adappa delivered a moving address laced with personal anecdotes of his service that drew a huge round of Applause. Dr Sharad Kale impressed upon the environmental issues for the well-being of our future generations. Cdr Angsuman Ojha thanked all the Sponsors to have helped in making the Event possible and to all spectators to have graced the occasion for encouraging the Martyrs’ families.

There was a short Tea break before the re-commencement of a scintillating performance by the Internationally renowned ‘Kabir Café’ Rock Band of our country. A Band which has performed in 12 countries worldwide and the entire length and breadth of our nation. A Band that was conceptualised by Neeraj Arya, Film editor who formed a band of 4 like-minded friends from all walks of life media, engineers, college drop-out etc. Raman Iyer is their conversationist and Mandolin player while Neeraj Arya, the lead star along with Britto and Mukund Ramaswami play the electric/bass guitars. Viren Solanki the skilled Drummer, is their youngest star. Together they have been churning out music to propagate the teachings of Sant Kabir worldwide….Hence the name ‘Kabir Café’…..By the time they built up the crescendo if rhythmic beats in 2 hours, the entire hall was up on their feet with hands flung up chanting to the hymns of Kabir…. 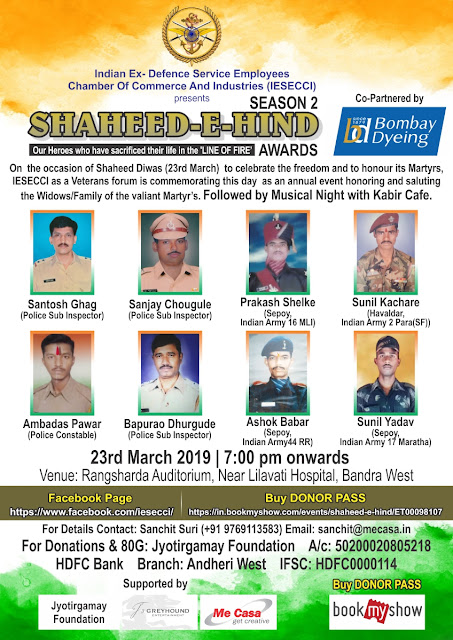 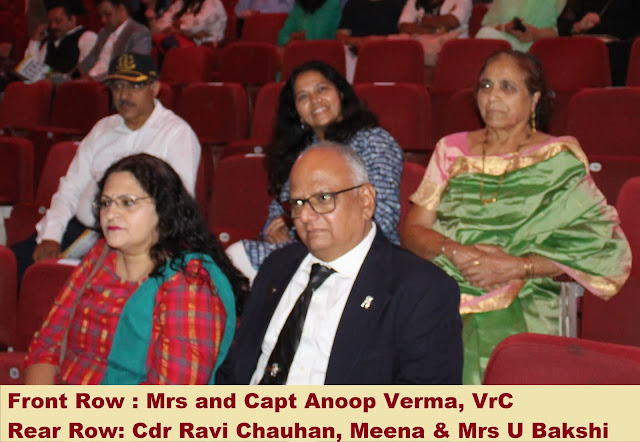 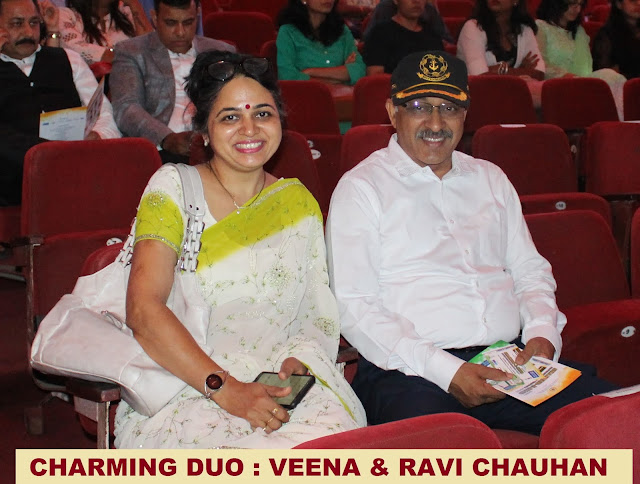 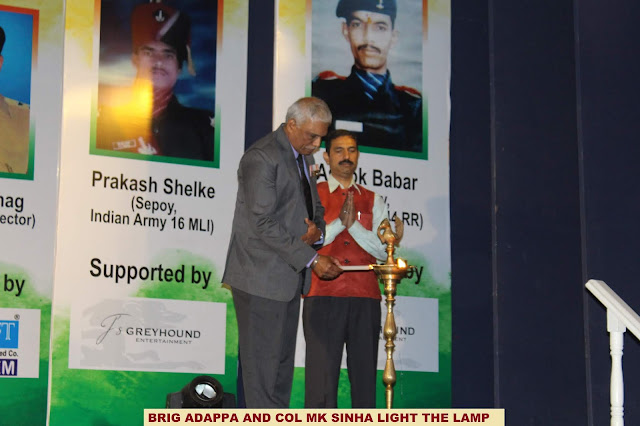 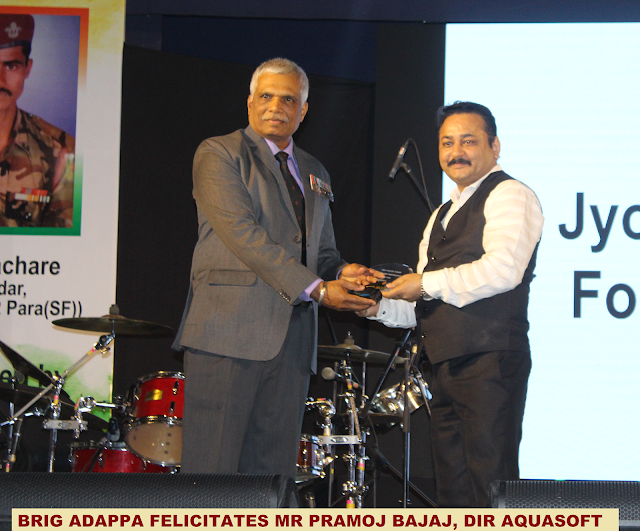 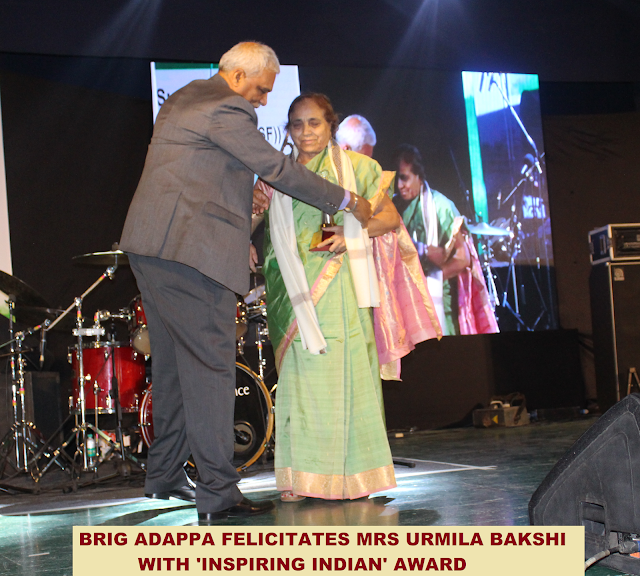 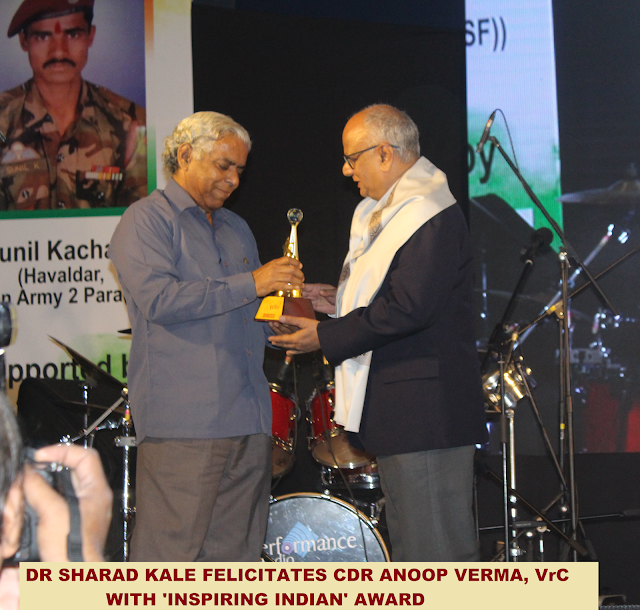 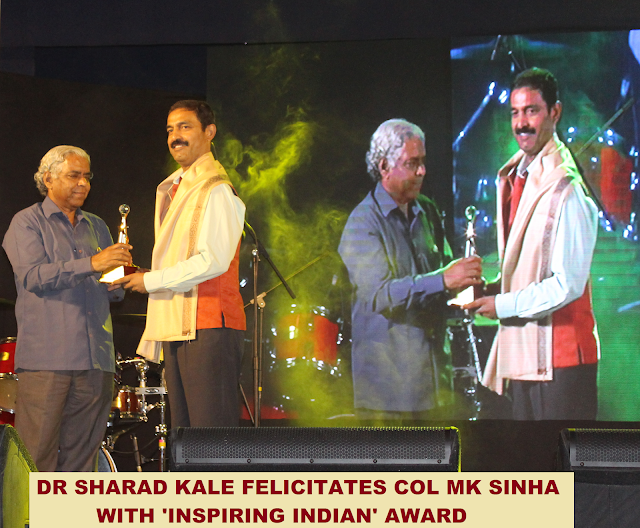 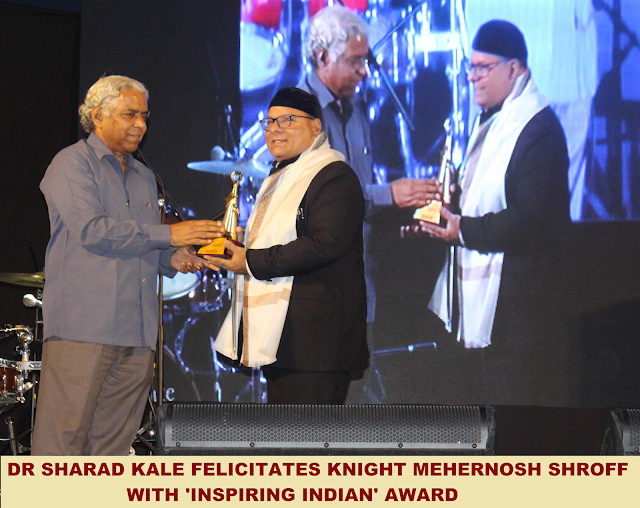 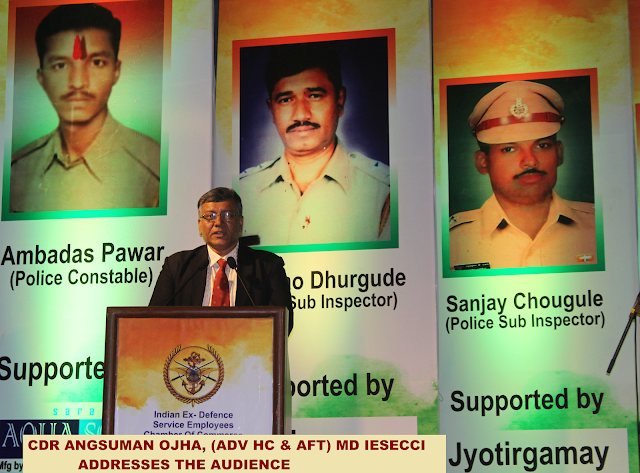 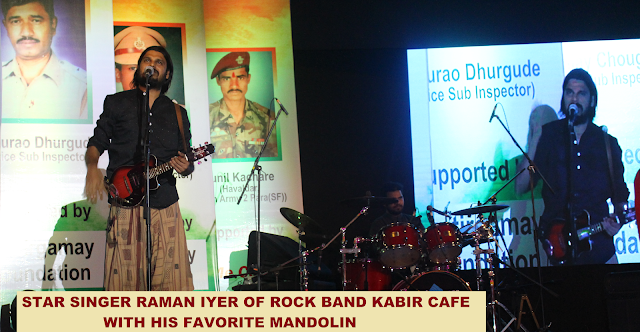 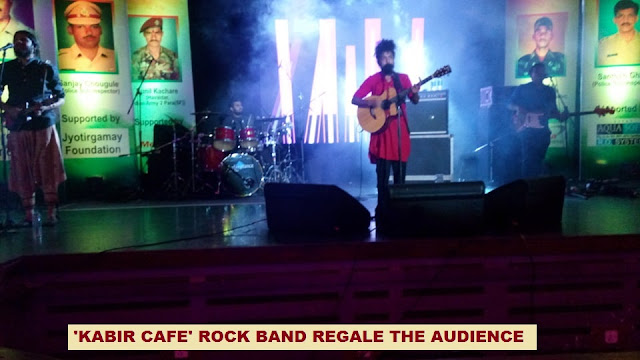 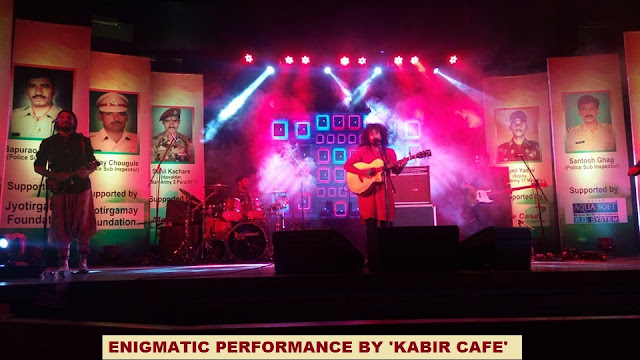 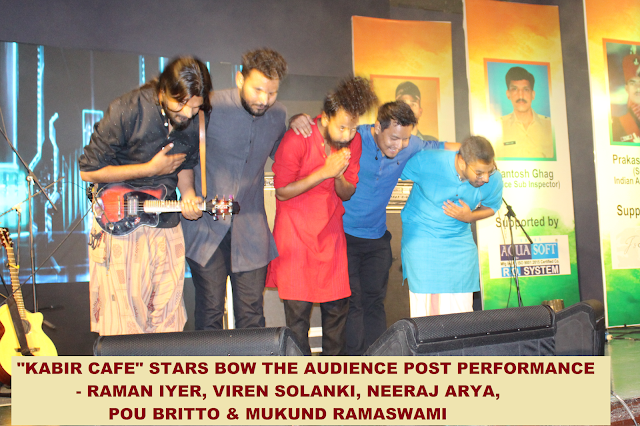 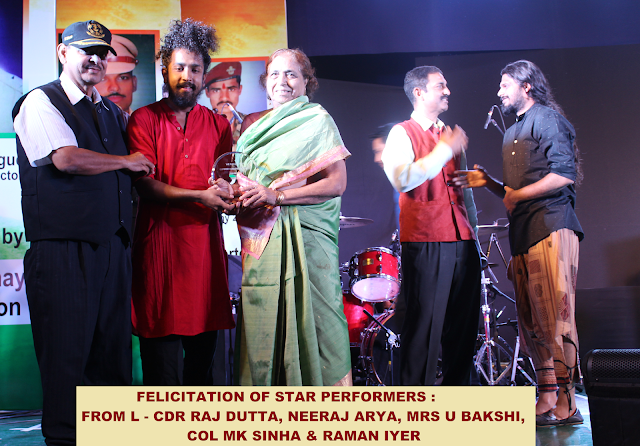 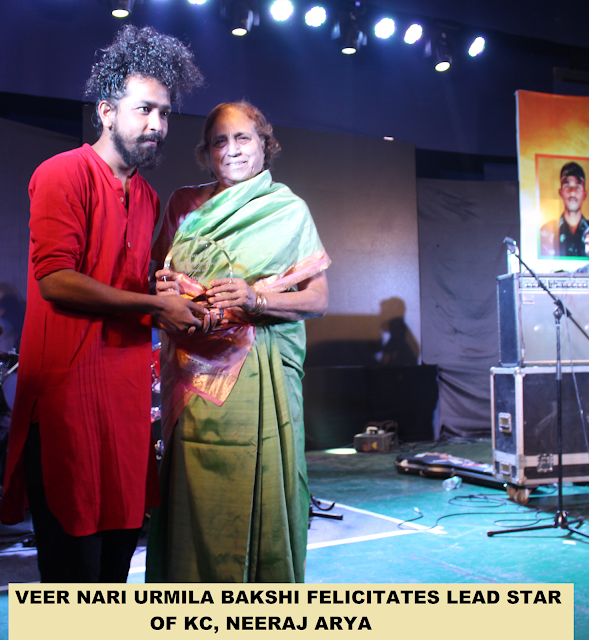 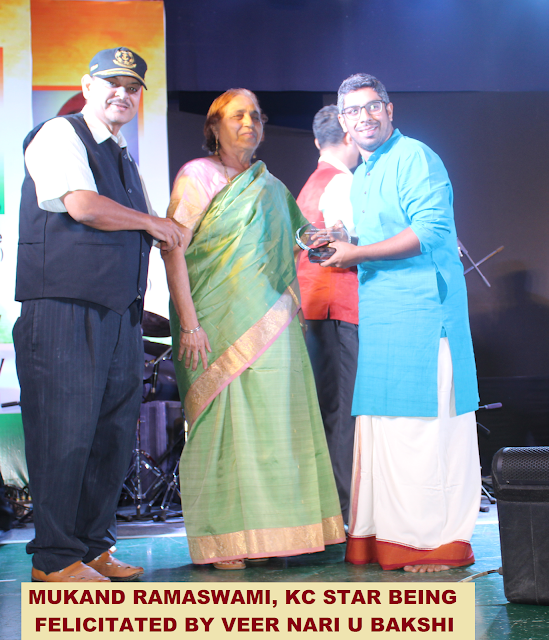 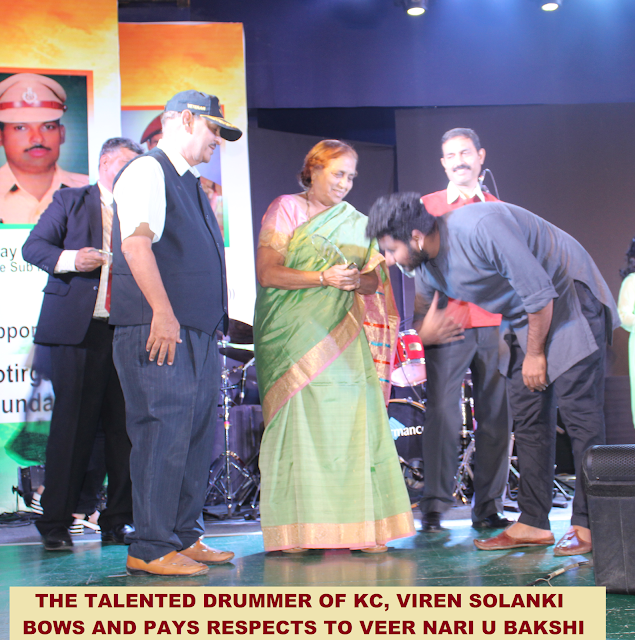 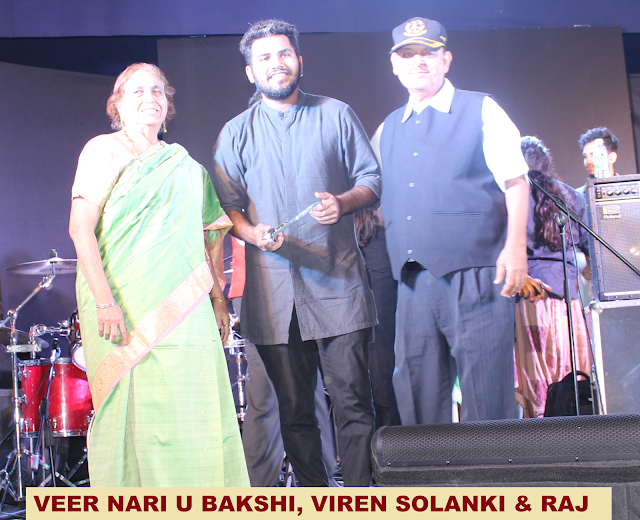 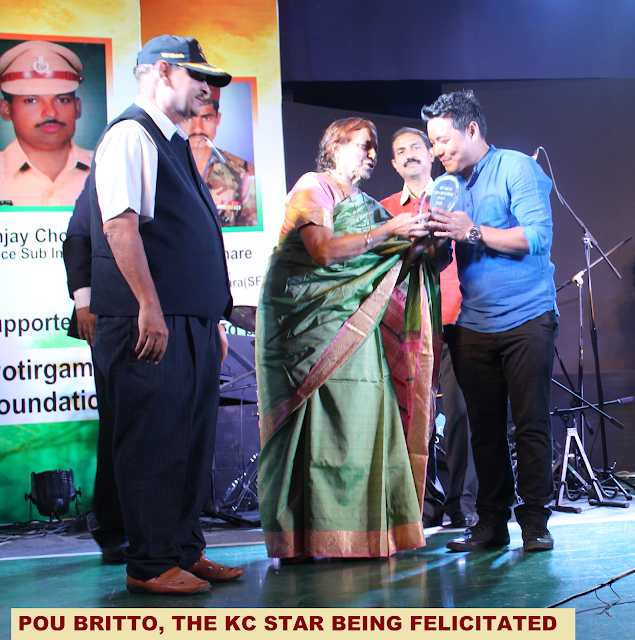 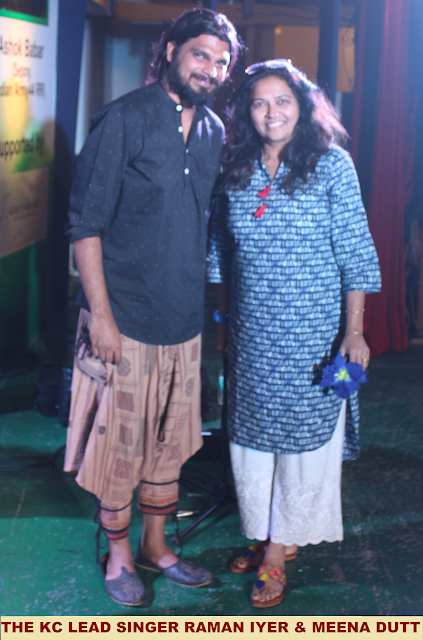 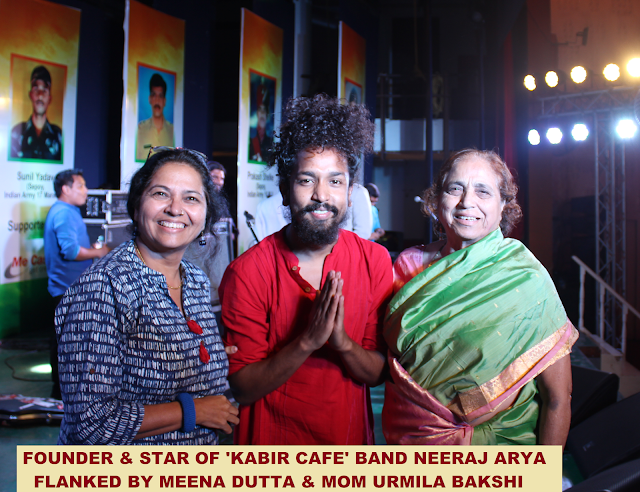 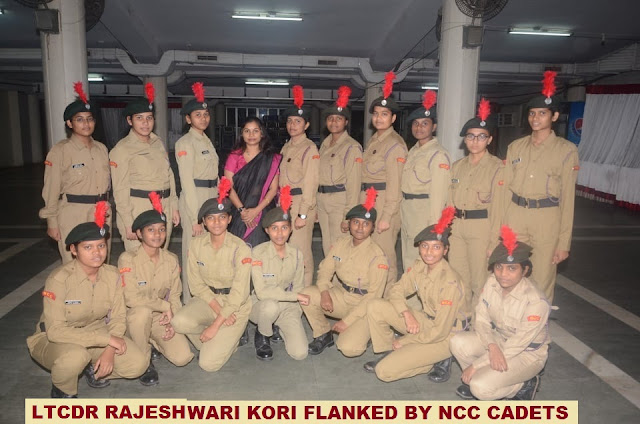 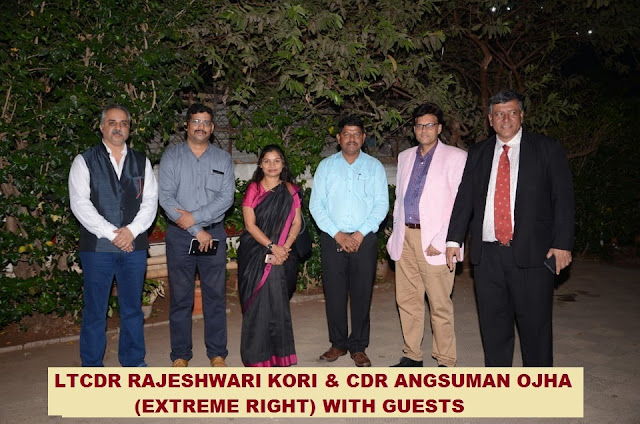 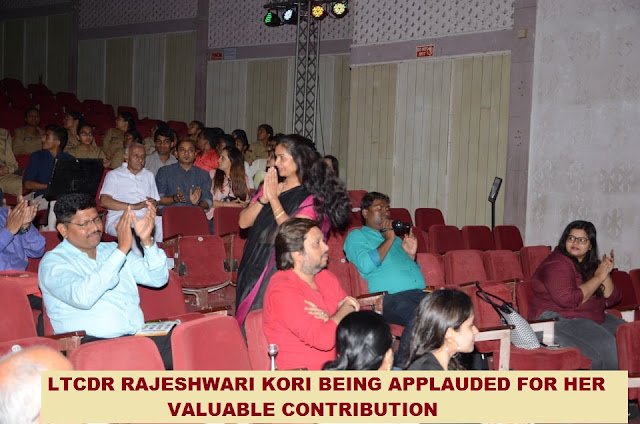 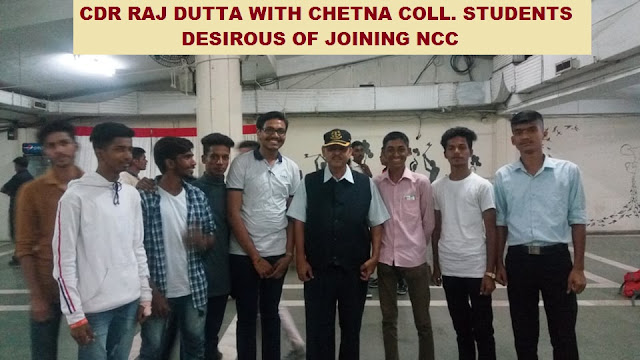 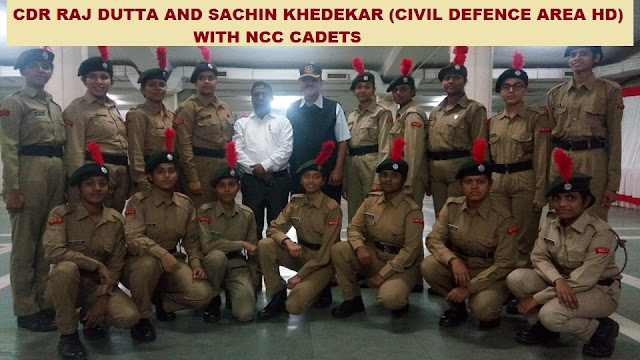 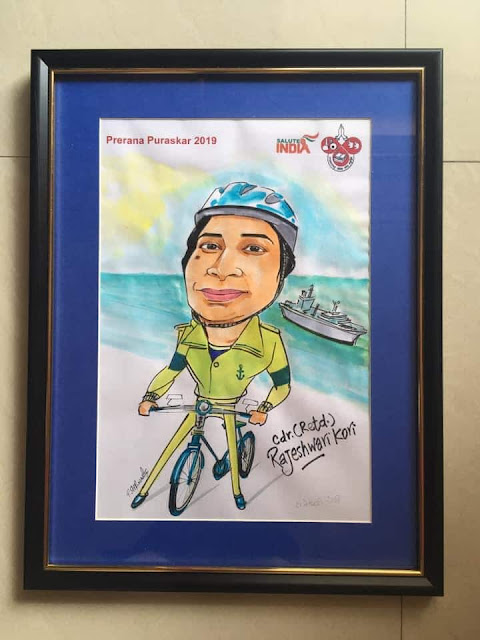