Dear Brusky’s loss on the inauspicious morning of 10th Oct 2014 was a gargantuan setback for Meena Bakhshi Dutt , who had nursed and was hooked to her in our Colaba Marshal house. She was week-long inconsolable at the Rabbit’s demise. While we reveled in her antics, never did appreciate her significance or contemplate her loss. I had then deduced that all those not harboring a Pet, should never adopt one, to skip the certain misery and agony at its loss.

When I recently met an adorable two month old bundle of Joy, a Pug acquired by my co-brother Commodore Ramesh Kumar and Nishi Kumar (Prof St Xavier's College of Education), I denounced my earlier predicament on Pets. ‘When we acquire a Pet, we receive copious tears in advance as a complementary’, I had concluded and yet I was wrong, as wrong as Molly Bell, since the tons of joviality and solace that pets offer is colossal. It neither can be quantified nor repaid. In the 80s, a research on pets suggested many benefits from pet-ownership. From reduced risk of asthma, and cardiovascular disease to increased mood and well-being. Some doctors started recommending pet-ownership to their patients.

The Pug as a breed are known as clowns of the canine world as they have a great sense of humour and enjoy showing it off. Pugs thrive on human companionship, is a fact that our newly acquired pet did prove to us on both occasions that we’ve met him at his new abode in Malad. He is yet to be christened a profile name, although Varoon Sharma comically calls him ‘Tommy’ and Anuj Dutt earnestly hails him, ‘Casper’. The later is likely to get a nod, based on Pug’s hail responses. Presently its teething and loves to bite anything offered to him or falling his way. He owns a small cozy bed to retire for the night, not before being tenderly petted by his master Ramesh and Mom Nishi. In the middle of the night if he does wake up and finds them sleeping, he expresses his displeasure by his low octave whimper.

Yesterday, we took him to the Hamla beach. His canter behind Ramesh was pretty dainty on the long stretch, reminding us of the Hutch/ Vodaphone tag line ‘Where ever you go, our network follows’. Anuj clicked numerous snaps of the pup on his DSLR. 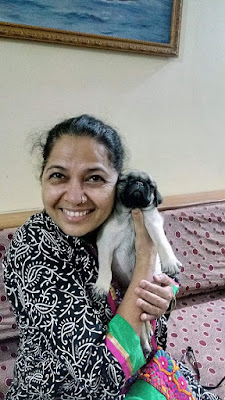 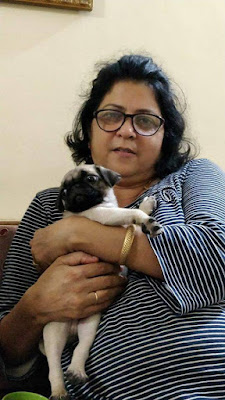 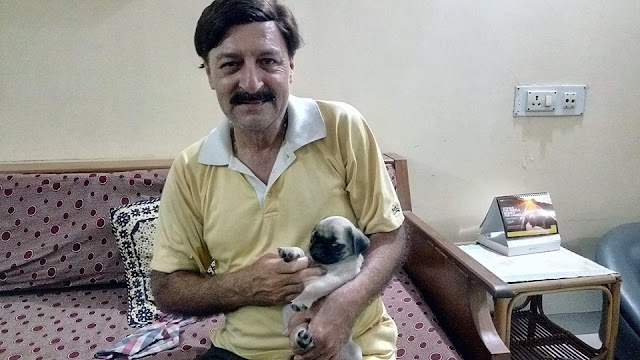 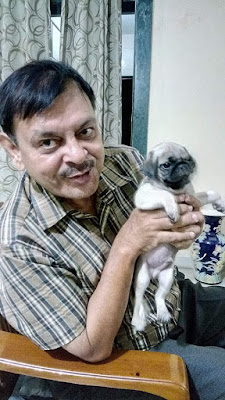 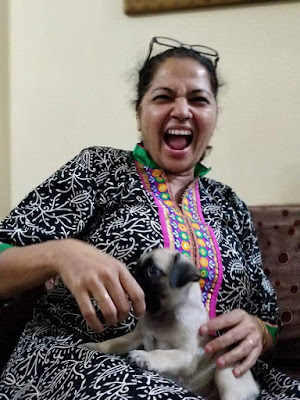 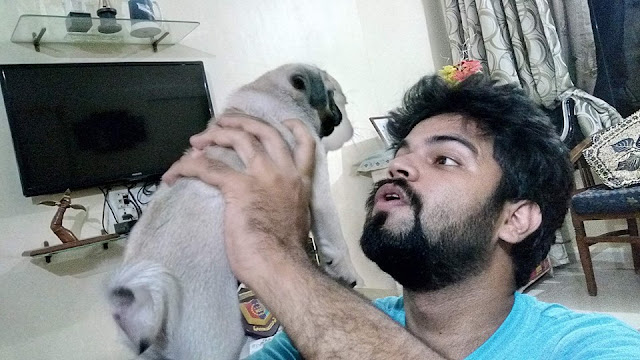 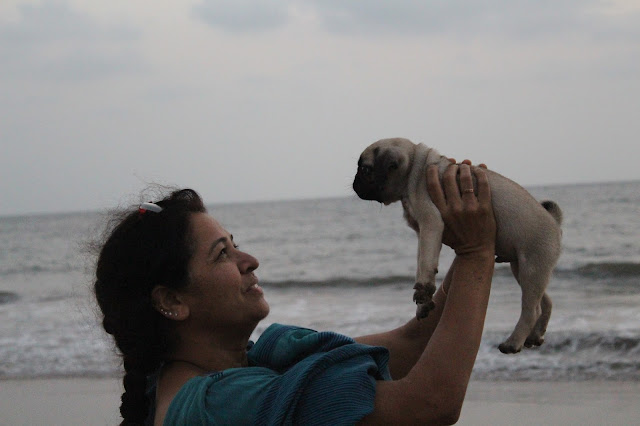 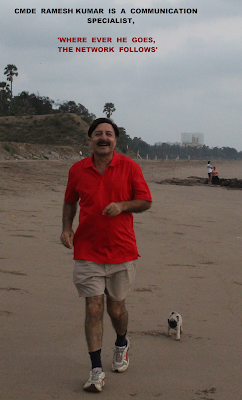 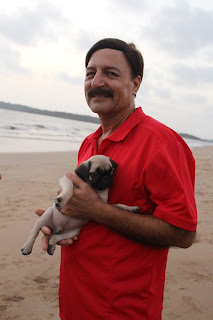 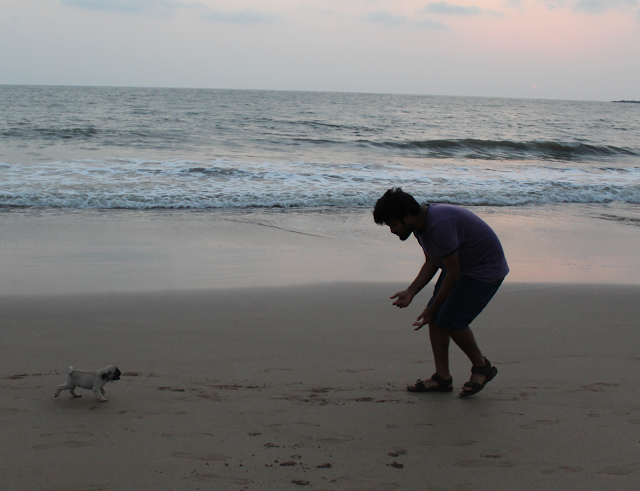 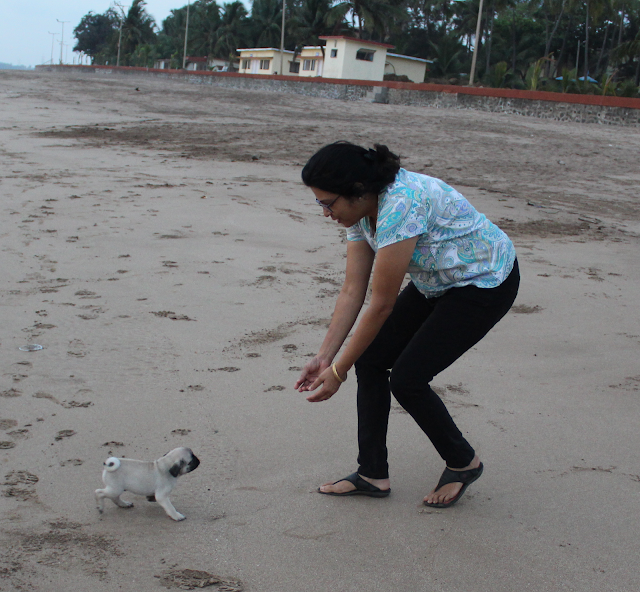 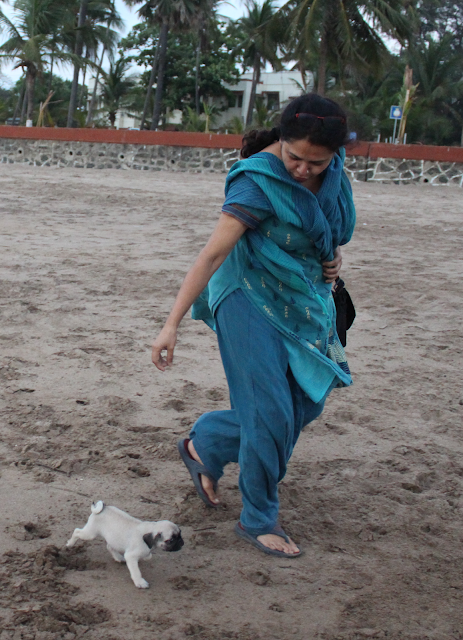 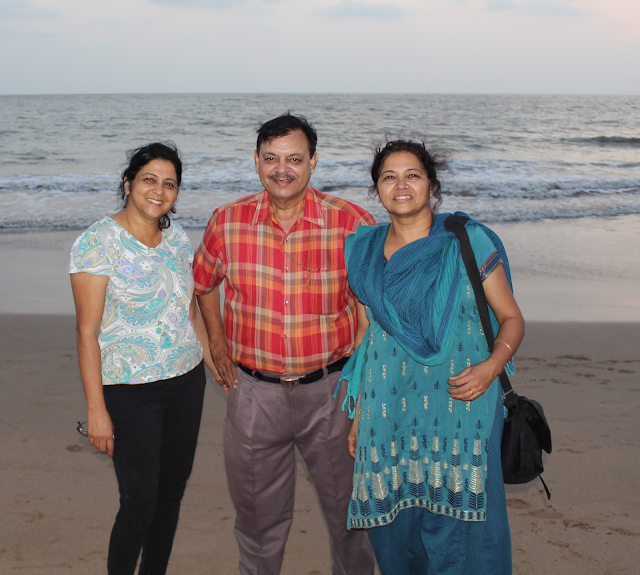