Morning of  Sunday, 12th Nov, time quarter past nine,  I along with Meena, was on drive from Borivali  to Colaba  for the weekly US Club tambola, when my mobile buzzed. I pulled the car to the road side  and as I put the instrument to my ears, my Heart sank. My brother Surinder from Ambala informed me sobbing that Mom had expired. Immediately back-tracked home. Informed Ravi bhai of the tragedy. His immediate reponse after consoling me was termination of the ongoing Fest. I said,”Bhai the show has to go on. Mom wont be happy, if you terminate the Fest”. Ravi bhai had no choice. At  3.40 pm self and Meena along with Aakash lifted off  from  Mumbai  airport  for Delhi, followed by the rest of journey by OLA to reach  destination by about  midnight the same day. Hugged younger brother Surinder, sister Anusuya, brother-in-law Rameshwar, Masi Neelam, Mausa Capt Tribhuvan Bali, Uncle Ravi Dutta, Rita Aunty, Mama PV Vaid and cousins Ashvin Dutta, Madhu Dutta, Bittu and all gathered  relatives, wept with them and spent some time with Mom, lying in the casket. I distinctly remember  her cheerful face  when I last  saw  her  off at our Defence colony Jamnagar home  on 26th Oct recently. Hugged her twice before  boarding the car, even as she slipped some 500s in my palm for Aakash and Anuj, who were back home in Mumbai. Once again I had come out of the car and hugged her yet again. She kept smiling as we drove off, bidding good-bye to Mom, Surinder and Neelam….And now she was lying absolutely still….My tear flood gates refused to shut…Through my tears I glanced up the roof, as I was sure of her presence around us.

Crafting an Obituary of one’s own Mother is the most horrendous, unfortunate and tragic task. Nevertheless, the best tribute that one can pay to a near and dear one is to remember their good times with moist eyes. Flashes of  the  earliest  footprints of  my  life transport  me, in a train to Hardwar  via Roorkie in company of my Mother, Daadiji and Chachaji. The next  flash is  my Chachaji  chucking me up in the air and  dipping me in the Ganges, even as I gasped for a breath. My Mom told me that I was  2 years old then, and my Daadiji reprimanded my uncle for this act.  There-after, I vividly remember  my Life as a Kid three years on in Mustafabad, that was once a sleepy little village near Jagadhari. I used to see an old man who used to walk every morning and come and feed the ant hill outside my house with wheat flour...I used to see a cow, triggered by its biological clock, come and stand in front of our house in the morning, afternoon and evening, as my mother used to make the first Roti and feed it to her...I used to see villagers feeding the fishes with tiny bits of dough and sparrows/ pigeons with grains... Now, such acts of micro generosity may seem utterly negligible, in the grand scheme of the mega universe, but  these are the acts that India could  truly be proud of. When  my Mom used to ignite up the Kerosene stove every morning, I used to sit beside and stare at the light blue flame of the stove and ask her “Doesn’t it look like the tail of the hawai jahaz”. My Dad was an airman posted in AF Ambala those days, and indeed the seeds of my later profession had been sown and flamed in my mind by my dear  Mother. Both of us used to run out to watch the jet aircrafts zooming past overhead.

One episode that  I vividly recall : Year 1962, I was about 4. My Dad had come on leave  and handed over a Rs 100/ note to my Grandma (half his monthly salary). Grandma  handed that  note me and said, “Daman, Ja  Ma  nu  de  aa” …What  little Raj understood “Ja  Har-nam nu de aa” … He danced all the way to Harnam’s  shop,( just as he was sent often by his grandma to fetch small household items from harnam) to hand him over the note. The shopkeeper in turn gave him a small toffee. Back home when the loss of note was discovered all hell went loose. All three homed on to little Raj. Raj uttered “Harnam”….Dad took him in tow to the shopkeeper. The shopkeeper  declined …Both returned home gloomy faced... Poor  Raj was shouted upon by Dad and Grandma. Mom took  Raj to Harnam’s shop once again, sure that the kid wouldn’t have lied. The shopkeeper  refused again. She pleaded  with Harnam,  and swore on his family  to come clear, to prevent  a mahabharat  at our home. Harnam’s  soul  woke up, and he handed over the 100 note to lill Raj’s  Mom….Mom, oh Mom, only you could have saved that day for me  !!

When my Dad came on next leave he appeared to be happy and had decided to take us to AF stn Poona (now Pune), where he had then been posted ( 6 Sqn), on my Mom’s insistence, for our future’s sake ....We all (me, my younger brother and sister) were very excited…But, still the 5 yr old Chhota Raj was sad…Sad for his Mataji who would be left alone in that Big house…But she consoled us, “Don’t worry, I am going to Jammu for a few days to my Eldest son on summer vacations and shall come to Poona too” …. It was a tearful farewell to Mustafabad and my 'Mataji', who had come to see us off at the station… Sadly she breathed her last in Jammu, soon after we had left the village.

We kids grew up under Mom’s umbrella as Dad was a bit strict. Dad’s transfers took us to Halwara, Tambaram, Jamnagar, Jullundhar (from where I joined the Navy and got detached), Kalaikunda, Guwahati and finally Jamnagar, where my parents decided to build a home in 1990 and settle down.

My Mom had been a very  respectful  daughter, devoted  wife and an affectionate  Mother. She was pleasant, lively, full of compassion and empathy for everyone. She maneuvered all her children onto the righteous path and was instrumental in steering   their careers and settling them. After the unfortunate and untimely demise of her husband in 1997,  She had been the sole guiding force of the family. She was a doting grand-mother of five grand children (Aakash, Anuj, Shreshtha, Bhagyashri and Muskan). Of late subsequent to the demise of her second son, Jitender (a Hydrologist in Gujarat Govt), two yrs ago, she had not been keeping good health and  last year she suffered  a  mild Heart-failure and was treated  at MH  CTC- Pune, where all her children looked after her. Recently  she had come with her younger son Surinder  for a relative’s marriage at Ambala Cantt  and was staying with her Daughter. On the morning of 12 Nov, she felt a bit uneasy due to chest congestion and was getting ready to be taken to MH, but unfortunately she breathed her last at about 0915 hrs.
------------------------------------------------------------------------------

I was overwhelmed to read Ravi Bhai’s poetry titled ‘Mere Chhote ne bhi Maa ko kho diya’ The lines evolved straight  from Ravi’s heart as he too had lost his dear  Mom and YKDN’s Mataji a few days ago. The emotive poetry enabled me to drop some more tears to make me stronger.

I dropped a few more tears when I read sentimental lines by Cdr Madanlal on my FB page.
RAJ uth dekh - ek nayaa sitaara
nikalla hai aasmaan mein
Maan ke challe jaane ke baad
yeh hi to dikhaaye ga raasata tujh ko
--
aansu  ab yehi  ponchhe ga tere
dillaassa ab yeh de ga tujh ko
moond kar apni aankhein - jab bhi dekhe ga
sahi raasta yeh hi dikhaaye ga tujh ko
---
pahale to dekhati thi maan teri
jab tu saamane aata tha
ab yeh hi dekhe ga tujhe har waqat
aur dil tera ab yeh hi behllaaye ga
----
Na maa na MADAN, na koyi saath ho ga tere
ab yeh hi sittaarra har jagga kaam aaye ga tere
-----------------------------------------------------------------------
On the sad occasion,  I would like to present  a Ghazal by Jagjit Singh that exhibits a lot of pain, evident from the fact that he had lost his 21 yr old son in a car tragedy. This video is a tribute to my Dad, Mom and Jati bhai. Amen !
On the sad occasion,  I would like to present a song from the movie Khalnayak, Lyricist  Anand Bakshi, Singer  Jagjit Singh,  Music composer-  LP.  even as I pray for the noble  Soul of my Mom  to rest in peace in the Heavens above and continue to bless us all. I selected this song as the Lyrics of the song hit me hard. Being a fauji and away from home for 35 long years, I could not take care of my Mom, as much as I could have, except for the intervening leave periods.
Tributes with this emotive song by Jagjit Singh, to the humble Soul.
https://www.youtube.com/watch?v=MdzSzWeMoow 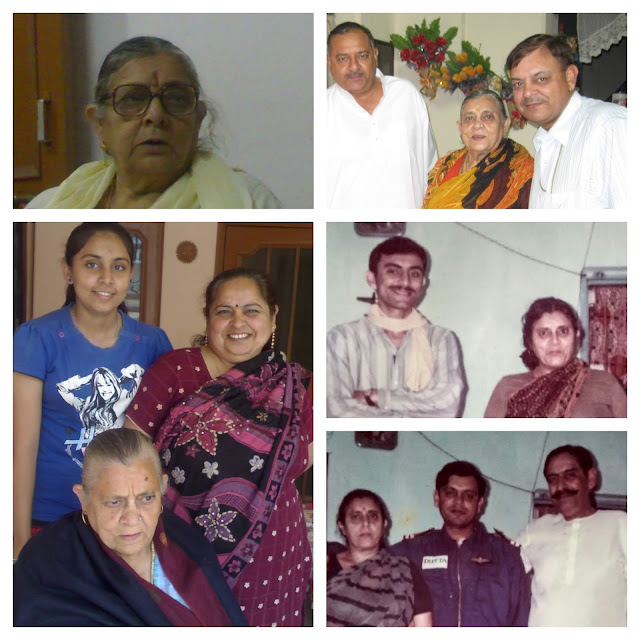